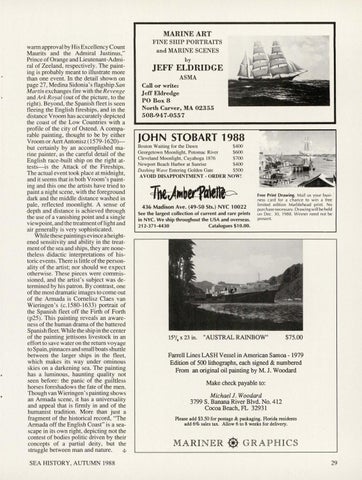 MARINE ART warm approval by His Excellency Count Maurits and the Admiral Justinus,&quot; Prince of Orange and Lieutenant-Admiral of Zeeland, respectively. The painting is probably meant to illustrate more than one event. In the detail shown on page 27, Medina Sidonia&#39;s flagship San Martin exchanges fire with the Revenge and Ark Royal (out of the picture, to the right). Beyond, the Spanish fleet is seen fleeing the English fireships, and in the distance Vroom has accurately depicted the coast of the Low Countries with a profile of the city of Ostend. A comparable painting, thought to be by either Vroom or Aert Antonisz ( 1579-1620)but certainly by an accomplished marine painter, as the careful detail of the English race-built ship on the right attests-is the Attack of the Fireships. The actual event took place at midnight, and it seems that in both Vroom &#39;s painting and this one the artists have tried to paint a night scene, with the foreground dark and the middle distance washed in pale, reflected moonlight. A sense of depth and distance is achieved through the use of a vanishing point and a single viewpoint, and the treatment of light and air generally is very sophisticated. While these paintings evince a heightened sensitivity and ability in the treatment of the sea and ships, they are nonetheless didactic interpretations of historic events. There is little of the personality of the artist; nor should we expect otherwise. These pieces were commissioned, and the artist&#39;s subject was determined by his patron. By contrast, one of the most dramatic images to come out of the Armada is Comelisz Claes van Wieringen &#39; s (c.1580-1633) portrait of the Spanish fleet off the Firth of Forth (p25). This painting reveals an awareness of the human drama of the battered Spanish fleet. While the ship in the center of the painting jettisons livestock in an effort to save water on the return voyage to Spain, pinnaces and small boats shuttle between the larger ships in the fleet, which makes its way under ominous skies on a darkening sea. The painting has a luminous, haunting quality not seen before: the panic of the guiltless horses foreshadows the fate of the men. Though van Wieringen &#39;s painting shows an Armada scene, it has a universality and appeal that is firmly in and of the humanist tradition. More than just a fragment of the historical record, &quot;The Armada off the English Coast&quot; is a seascape in its own right, depicting not the contest of bodies politic driven by their concepts of a partial deity, but the struggle between man and nature. u, SEA HISTORY, AUTUMN 1988

Free Print Drawing. Mai l us your busi- 1 ness card for a chance to win a free limited edition Marblehead print. No purchase necessary. Drawing w ill be held on Dec. 30, 1988. Winner need not be present.