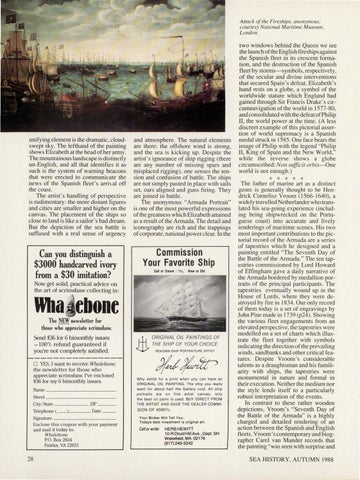 unifying element is the dramatic, cloud- and atmosphere. The natural elements swept sky. The lefthand of the painting are there: the offshore wind is strong, shows Elizabeth at the head of her army. and the sea is kicking up. Despite the The mountainous landscape is distinctly artist's ignorance of ship rigging (there un-English, and all that identifies it as are any number of missing spars and such is the system of warning beacons misplaced rigging), one senses the tenthat were erected to communicate the sion and confusion of battle. The ships news of the Spanish fleet' s arfrval off Âˇ are not simply pasted in place with sails the coast. set, oars aligned and guns firing. They The artist's handling of perspective are joined in battle. is rudimentary: the more distant figures The anonymous "Armada Portrait" and cities are smaller and higher on the is one of the most powerful expressions canvas. The placement of the ships so of the greatness which Elizabeth attained close to land is like a sailor's bad dream. as a result of the Armada. The detail and But the depiction of the sea battle is iconography are rich and the trappings suffused with a real sense of urgency of corporate, national power clear. In the

Can you distinguish a $3000 handcarved ivory from a $30 imitation?

Now get solid, practical advice on the art of scrimshaw collecting in :

The NEW newsletter for those who appreciate scrimshaw.

Why settle for a print when you can have an ORIGINA L OIL PAINTING. The ship you really want for about half the Gallery cost. All ship portraits are on fine artist canvas , only the best oil paint is used . BUY DIRECT FROM THE ARTIST AND SAVE THE DEALER COMMlSION OF 40160 %. Your Broker Will Tell You: Todays best investment is original art.

two windows behind the Queen we see the launch of the English fireships against the Spanish fleet in its crescent formation, and the destruction of the Spanish fleet by storms- symbols, respectively, of the secular and divine interventions that secured Spain 's defeat. Elizabeth's hand rests on a globe, a symbol of the worldwide stature which England had gained through Sir Francis Drake 's circumnavigation of the world in 1577-80, and consolidated with the defeat of Philip II, the world power at the time. (A less discreet example of this pictorial assertion of world supremacy is a Spanish medal struck in 1585. One face bears the image of Philip with the legend "Phi lip II, King of Spain and the New World," while the reverse shows a globe circumscribed: Non sufficit orbis-One world is not enough.)

* * * art* as a distinct The father *of marine genre is generally thought to be Hendrick Comelisz Vroom (1566-1640), a widely travelled Netherlander who translated his sea-going experience (including being shipwrecked on the Portuguese coast) into accurate and lively renderings of maritime scenes. His two most important contributions to the pictorial record of the Armada are a series of tapestries which he designed and a painting entitled "The Seventh Day of the Battle of the Armada." The ten tapestries commissioned by Lord Howard of Effingham gave a daily narrative of the Armada bordered by medallion portraits of the principal participants. The tapestries eventually wound up in the House of Lords, where they were destroyed by fire in 1834. Our only record of them today is a set of engravings by John Pine made in 1739 (p24 ). Showing the various fleet engagements from an elevated perspective, the tapestries were modelled on a set of charts which illustrate the fleet together with symbols indicating the direction of the prevailing winds, sandbanks and other critical features. Despite Vroom's considerable talents as a draughtsman and his familiarity with ships, the tapestries were monumental in nature and formal in their execution. Neither the medium nor the style lends itself to a particularly robust interpretation of the events. In contrast to these rather wooden depictions, Vroom 's "Seventh Day of the Battle of the Armada" is a highly charged and detailed rendering of an action between the Spanish and English fleets. Vroom' s contemporary and biographer Carel van Mander records that the painting "was seen with surprise and SEA HISTORY, AUTUMN 1988