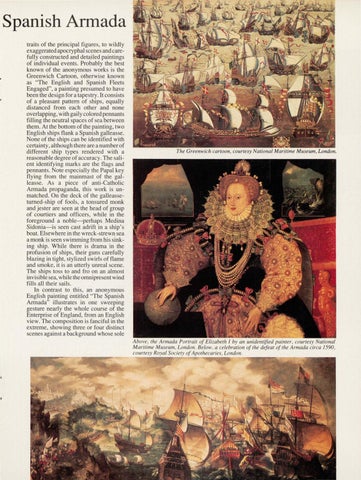 Spanish Armada traits of the principal figures, to wildly exaggerated apocryphal scenes and carefully constructed and detailed paintings of individual events. Probably the best known of the anonymous works is the Greenwich Cartoon, otherwise known as "The English and Spanish Fleets Engaged", a painting presumed to have been the design for a tapestry. It consists of a pleasant pattern of ships, equally distanced from each other and none overlapping, with gaily colored pennants filling the neutral spaces of sea between them. At the bottom of the painting, two English ships flank a Spanish galleasse. None of the ships can be identified with certainty, although there are a number of different ship types rendered with a reasonable degree of accuracy. The salient identifying marks are the flags and pennants. Note especially the Papal key flying from the mainmast of the galleasse. As a piece of anti-Catholic Armada propaganda, this work is unmatched. On the deck of the galleassetumed-ship of fools , a tonsured monk and jester are seen at the head of group of courtiers and officers, while in the foreground a noble-perhaps Medina Sidonia-is seen cast adrift in a ship's boat. Elsewhere in the wreck-strewn sea a monk is seen swimming from his sinking ship. While there is drama in the profusion of ships, their guns carefully blazing in tight, stylized swirls of flame and smoke, it is an utterly unreal scene. The ships toss to and fro on an almost invisible sea, while the omnipresent wind fills all their sails. In contrast to this, an anonymous English painting entitled "The Spanish Armada" illustrates in one sweeping gesture nearly the whole course of the Enterprise of England, from an English view. The composition is fanciful in the extreme, showing three or four distinct scenes against a background whose sole

Above, the Armada Portrait of Elizabeth I by an unidentified painter, courtesy National Maritime Museum , London. Below, a celebration of the defeat of the Armada circa 1590, courtesy Royal Society of Apothecaries, London.