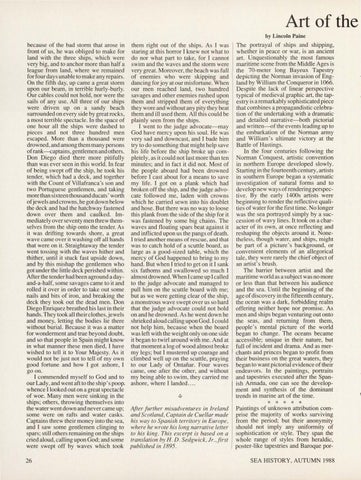 Art of the by Lincoln Paine

because of the bad storm that arose in front of us, he was obliged to make for land with the three ships, which were very big, and to anchor more than half a league from land, where we remained for four days unable to make any repairs. On the fifth day, up came a great storm upon our beam, in terrible hurly-burly. Our cables could not hold, nor were the sails of any use. All three of our ships were driven up on a sandy beach surrounded on every side by great rocks, a most terrible spectacle. In the space of one hour all the ships were dashed to pieces and not three hundred men escaped. More than a thousand were drowned, and among them many persons of rank-{;aptains, gentlemen and others. Don Diego died there more pitifully than was ever seen in this world. In fear of being swept off the ship, he took his tender, which had a deck, and together with the Count ofVillafranca&#39;s son and two Portuguese gentlemen, and taking more than sixteen thousand ducats&#39; worth of jewels and crowns, he got down below the deck and had the hatchway fastened down over them and caulked. Immediately over seventy men threw themselves from the ship onto the tender. As it was drifting towards shore, a great wave came over it washing off all hands that were on it. Straightaway the tender went tossing with the waves hither and thither, until it stuck fast upside down, and by this mishap the gentlemen who got under the little deck perished within. After the tender had been aground a dayand-a-half, some savages came to it and rolled it over in order to take out some nails and bits of iron, and breaking the deck they took out the dead men. Don Diego Enriquez breathed his last in their hands. They took all theirclothes,jewels and money, letting the bodies lie there without burial. Because it was a matter for wonderment and true beyond doubt, and so that people in Spain might know in what manner these men died, I have wished to tell it to Your Majesty. As it would not be just not to tell of my own good fortune and how I got ashore, I go on. I commended myself to God and to our Lady, and went aft to the ship&#39;s poop. whence I looked out on a great spectacle of woe. Many men were sinking in the ships; others, throwing themselves into the water went down and never came up; some were on rafts and water casks. Captains threw their money into the sea, and I saw some gentlemen clinging to spars; still others remaining on the ships cried aloud, calling upon God; and some were swept off by waves which took 26

them right out of the ships. As I was staring at this horror I knew not what to do nor what part to take, for I cannot swim and the waves and the storm were very great. Moreover, the beach was full of enemies who were skipping and dancing for joy at our misfortune. When our men reached land, two hundred savages and other enemies rushed upon them and stripped them of everything they wore and without any pity they beat them and ill used them. All this could be plainly seen from the ships. I went to the judge advocate-may God have mercy upon his soul. He was very sad and downcast, and I bade him try to do something that might help save his life before the ship broke up completely, as it could not last more than ten minutes; and in fact it did not. Most of the people aboard had been drowned before I cast about for a means to save my life. I got on a plank which had broken off the ship, and the judge advocate followed me, laden with crowns which he carried sewn into his doublet and hose. But there was no way to loose this plank from the side of the ship for it was fastened by some big chains. The waves and floating spars beat against it and inflicted upon us the pangs of death. I tried another means of rescue, and that was to catch hold of a scuttle board, as large as a good-sized table, which the mercy of God happened to bring to my hand. But when I tried to get on it I sank six fathoms and swallowed so much I almost drowned. When I came up I called to the judge advocate and managed to pull him on the scuttle board with me; but as we were getting clear of the ship, a monstrous wave swept over us so hard that the judge advocate could not hold on and he drowned. As he went down he shrieked aloud calling upon God. I could not help him, because when the board was left with the weight only on one side it began to twirl around with me. And at that moment a log of wood almost broke my legs; but I mustered up courage and climbed well up on the scuttle, praying to our Lady of Ontanar. Four waves came, one after the other, and without my being able to swim, they carried me ashore, where I landed ....

The portrayal of ships and shipping, whether in peace or war, is an ancient art. Unquestionably the most famous maritime scene from the Middle Ages is the 70-meter long Bayeux Tapestry depicting the Norman invasion of England by William the Conqueror in 1066. Despite the lack of linear perspective typical of medieval graphic art, the tapestry is a remarkably sophisticated piece that combines a propagandistic celebration of the undertaking with a dramatic and detailed narrative-both pictorial and written--of the events leading up to the embarkation of the Norman army and William&#39;s ultimate victory at the Battle of Hastings. In the four centuries following the Norman Conquest, artistic convention in northern Europe developed slowly. Starting in the fourteenth century, artists in southern Europe began a systematic investigation of natural forms and to develop new ways of rendering perspective. By the early 1400s artists were beginning to render the reflective qualities of water for the first time. No longer was the sea portrayed simply by a succession of wavy lines. It took on a character of its own, at once reflecting and reshaping the objects around it. Nonetheless, though water, and ships, might be part of a picture&#39;s background, or convenient elements of an allegorical tale, they were rarely the chief object of an artist&#39;s brush. The barrier between artist and the maritime world as a subject was no more or less than that between his audience and the sea. Until the beginning of the age of discovery in the fifteenth century, the ocean was a dark, forbidding realm offering neither hope nor promise. As men and ships began venturing out onto the seas, and returning from them, people&#39;s mental picture of the world began to change. The oceans became accessible; unique in their nature, but full of incident and drama. And as merchants and princes began to profit from their business on the great waters, they began to want pictorial evidence of their endeavors. In the paintings, portraits and tapestries executed after the Spanish Armada, one can see the development and synthesis of the dominant trends in marine art of the time.

After further misadventures in Ireland and Scotland, Captain de Cuellar made his way to Spanish territory in Europe, where he wrote his long narrative letter to his king. This excerpt is based on a translation by H. D. Sedgwick, Jr.,first published in 1895.

Paintings of unknown attribution comprise the majority of works surviving from the period; but their anonymity should not imply any uniformity of sophistication or style. They span the whole range of styles from heraldic, poster-like tapestries and Baroque por-