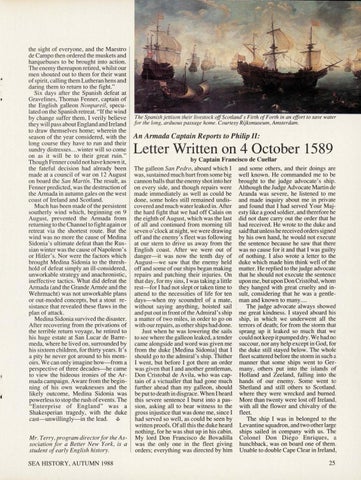 the sight of everyone, and the Maestro de Campo then ordered the muskets and harquebuses to be brought into action. The enemy thereupon retired, whilst our men shouted out to them for their want of spirit, calling them Lutheran hens and daring them to return to the fight." Six days after the Spanish defeat at Gravelines, Thomas Fenner, captain of the English galleon Nonpareil, speculated on the Spanish retreat. "If the wind by change suffer them, I verily believe they will pass about England and Ireland to draw themselves home; wherein the season of the year considered, with the long course they have to run and their sundry distresses ... winter will so come on as it will be to their great ruin." Though Fenner could not have known it, the fateful decision had already been made at a council of war on 12 August on board the San Martin. The result, as Fenner predicted, was the destruction of the Armada in autumn gales on the west coast of Ireland and Scotland. Much has been made of the persistent southerly wind which, beginning on 9 August, prevented the Armada from returning to the Channel to fight again or retreat via the shortest route. But the wind was no more the cause of Medina Sidonia's ultimate defeat than the Russian winter was the cause of Napoleon's or Hitler's. Nor were the factors which brought Medina Sidonia to the threshhold of defeat simply an ill-considered, unworkable strategy and anachronistic, ineffective tactics. What did defeat the Armada (and the Grande Armee and the Wehrmacht) was not unworkable plans or out-moded concepts, but a stout resistance that revealed these flaws in the plan of attack. Medina Sidonia survived the disaster. After recovering from the privations of the terrible return voyage, he retired to his huge estate at San Lucar de Barremeda, where he lived on, surrounded by his sixteen children, for thirty years. It's a pity he never got around to his memoirs. We can only imagine how-from a perspective of three decades-he came to view the hideous ironies of the Armada campaign. Aware from the beginning of his own weaknesses and the likely outcome, Medina Sidonia was powerless to stop the rush of events. The "Enterprise of England" was a Shakesperian tragedy, with the duke cast-unwillingly-in the lead. .!I Mr. Terry, program director for the Association for a Better New York, is a student of early English history.

The Spanish jettison their livestock off Scotland's Firth of Forth in an effort to save water for the long, arduous passage home. Courtesy Rijksmuseum, Amsterdam.

The galleon San Pedro, aboard which I was, sustained much hurt from some big cannonballsthattheenemyshotintoher on every side, and though repairs were made immediately as well as could be done, some holes still remained undiscovered and much water leaked in. After the hard fight that we had off Calais on the eighth of August, which was the last of all and continued from morning till seven o'clock at night, we were drawing off and the enemy's fleet was following at our stem to drive us away from the English coast. After we were out of danger-it was now the tenth day of August-we saw that the enemy held off and some of our ships began making repairs and patching their injuries. On that day, for my sins, I was taking a little rest-for I had not slept or taken time to attend to the necessities of life for ten days-when my scoundrel of a mate, without saying anything, hoisted sail andputoutinfrontoftheAdmiral'sship a matter of two miles, in order to go on with our repairs, as other ships had done. Just when he was lowering the sails to see where the galleon leaked, a tender came alongside and word was given me from the duke [Medina Sidonia] that I should go to the admiral's ship. Thither I went, but before I got there an ordey was given that I and another gentleman, Don Cristobal de Avila, who was captain of a victualler that had gone much further ahead than my galleon, should be put to death in disgrace. When I heard this severe sentence I burst into a passion, asking all to bear witness to the gross injustice that was done me, since I had served so well, as could be seen by written proofs. Of all this the duke heard nothing, for he was shut up in his cabin. My lord Don Francisco de Bovadilla was the only one in the fleet giving orders; everything was directed by him

and some others, and their doings are well known. He commanded me to be brought to the judge advocate's ship. Although the Judge Advocate Martin de Aranda was severe, he listened to me and made inquiry about me in private and found that I had served Your Majesty like a good soldier, and therefore he did not dare carry out the order that he had received. He wrote to the duke and said that unless he received orders signed by his own hand, he would not execute the sentence because he saw that there was no cause for it and that I was guilty of nothing. I also wrote a letter to the duke which made him think well of the matter. He replied to the judge advocate that he should not execute the sentence upon me, but upon Don Cristobal, whom they hanged with great cruelty and insuit, considering that he was a gentle: man and known to many .... The judge advocate always showed me great kindness. I stayed aboard his ship, in which we underwent all the terrors of death; for from the storm that sprang up it leaked so much that we could not keep it pumped dry. We had no succour, nor any help except in God, for the duke still stayed below. The whole fleet scattered before the storm in such a manner that some ships went to Germany, others put into the islands of Holland and Zeeland, falling into the hands of our enemy. Some went to Shetland and still others to Scotland, where they were wrecked and burned. More than twenty were lost off Ireland, with all the flower and chivalry of the fleet. The ship I was in belonged to the Levantine squadron, and two other large ships sailed in company with us. The Colonel Don Diego Enriques, a hunchback, was on board one of them. Unable to double Cape Clear in Ireland, 25