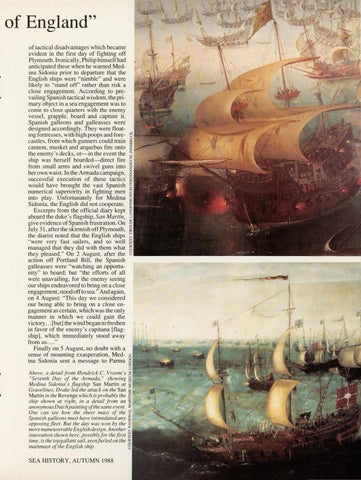 of England'' of tactical disadvantages which became evident in the first day of fighting off Plymouth.Ironically, Philip himself had anticipated these when he warned Medina Sidonia prior to departure that the English ships were "nimble" and were Âˇ likely to "stand off' rather than risk a close engagement. According to prevailing Spanish tactical wisdom, the primary object in a sea engagement was to come to close quarters with the enemy vessel, grapple, board and capture it. Spanish galleons and galleasses were designed accordingly. They were floating fortresses, with high poops and forecastles, from which gunners could train cannon, musket and arquebus fire onto the enemy's decks, or-in the event the ship was herself boarded-direct fire from small arms and swivel guns into herown waist. In the Annada campaign, successful execution of these tactics would have brought the vast Spanish numerical superiority in fighting men into play. Unfortunately for Medina Sidonia, the English did not cooperate. Excerpts from the official diary kept aboard the duke's flagship, San Martin, give evidence of Spanish frustration. On July 31, afterthe skirmish off Plymouth, the diarist noted that the English ships "were very fast sailers, and so well managed that they did with them what they pleased." On 2 August, after the action off Portland Bill, the Spanish galleasses were "watching an opportunity" to board; but "the efforts of all were unavailing, for the enemy seeing our ships endeavored to bring on a close engagement, stood off to sea." And again, on 4 August: "This day we considered our being able to bring on a close engagement as certain, which was the only manner in which we could gain the victory ... [but] the wind began to freshen in favor of the enemy's capitana [flagship], whi~~ immediately stood away from us .... Finally on 5 August, no doubt with a sense of mounting exasperation, Medina Sidonia sent a message to Parma

3 Above, a detail from Hendrick C. Vroom' s i "Seventh Day of the Armada," showing Medina Sidonia' s flagship San Martin at Gravelines. Drake led the attack on the San Martin in the Revenge which is probably the ship shown at right, in a detail from an anonymous Dutch painting ofthe same event. One can see how the sheer mass of the Spanish galleons must have intimidated any opposing fleet. But the day was won by the more maneuverable English design . Another innovation shown here, possibly for the first time, is the topgallant sail, seen furled on the mainmast of the English ship.