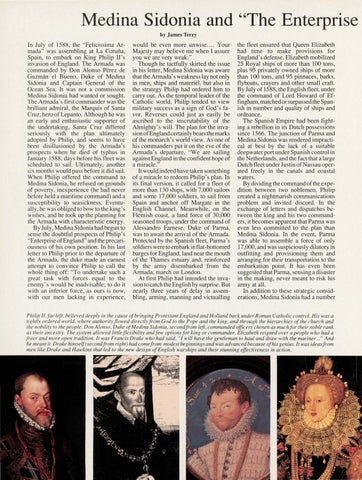 Medina Sidonia and ''The Enterprise by James Terry

In July of 1588, the "Felici ss ima Armada" was assembling at La Corufia, Spain, to embark on King Philip H's invas ion of England. The Armada was commanded by Don Alonso Perez de Guzman el Bueno, Duke of Medina Sidonia and Captain General of the Ocean Sea. It was not a commission Medina Sidonia had wanted or sought. The Armada's first commander was the brilliant admiral, the Marqui s of Santa Cruz, hero of Lepanto. Although he was an early and enthusiastic supporter of the undertaking, Santa Cruz differed seriously with the plan ultimately adopted by Philip, and seems to have been disillusioned by the Armada's prospects when he died of typhus in January 1588, days before his fleet was scheduled to sail. Ultimately , another six months would pass before it did sail. When Philip offered the command to Medina Sidonia, he refused on grounds of poverty, inexperience (he had never before held a maritime command) and a susceptibility to seasickness. Eventually , he was obliged to bow to the king 's wishes, and he took up the planning for the Armada with characteristic energy. By July, Medina Sidonia had begun to sense the doubtful prospects of Philip 's "Enterprise of England" and the precariousness of his own position. In his last letter to Philip prior to the departure of the Armada, the duke made an earnest attempt to convince Philip to call the whole thing off: "To undertake such a great task with forces equal to the enemy's would be inadvisable; to do it with an inferior force, as ours is now, with our men lacking in experience,

would be even more unwise . .. . Your Majesty may believe me when I assure you we are very weak. " Though he tactfully skirted the issue in his letter, Medina Sidonia was aware that the Armada's weakness lay not only in men, ships and materiel, but also in the strategy Philip had ordered him to carry out. As the temporal leader of the Catholic world, Philip tended to view military success as a sign of God's favor. Reverses could just as easily be ascribed to the inscrutability of the Almighty 's will. The plan for the invasion of England certain Iy bears the marks of the monarch 's world view. As one of his commanders put it on the eve of the Armada 's departure, "We are sailing against England in the confident hope of a miracle." It would indeed have taken something of a miracle to redeem Philip 's plan. In its final version, it called for a fleet of more than 130 ships, with 7,000 sailors and some 17,000 soldiers, to sail from Spain and anchor off Margate in the English Channel. Meanwhile, on the Flemish coast, a land force of 30,000 seasoned troops , under the command of Alessandro Farnese, Duke of Parma, was to await the arrival of the Armada. Protected by the Spanish fleet, Parma's soldiers were to embark in flat-bottomed barges for England , land near the mouth of the Thames estuary and, reinforced by the army di sembarked from the Armada, march on London . At first Philip had intended the invasion to catch the English by surpri se. But nearly three years of delay in assembling, arming, manning and victualling

the fleet ensured that Queen Elizabeth had time to make provi sions for England 's defense. Elizabeth mobilized 25 Royal ships of more than 100 tons, plus 95 privately owned ships of more than 100 tons, and 95 pinnaces, barks, flyboats, crayers and other small craft. By July of 1588, the English fleet, under the command of Lord Howard of Effingham , matched or surpassed the Spanish in number and quality of ships and ordnance. The Spanish Empire had been fighting a rebellion in its Dutch possessions since 1566. The junction of Parma and Medina Sidonia was rendered impractical at best by the lack of a suitable deepwater port under Spanish control in the Netherlands, and the fact that a large Dutch fleet under Justin of Nassau operated freely in the canals and coastal waters. By dividing the command of the expedition between two noblemen, Philip created a nightmari sh communications problem and invited discord. In the exchange of letters and dispatches between the king and hi s two commanders, it becomes apparent that Parma was even less committed to the plan than Medina Sidonia. In the event, Parma was able to assemble a force of only 17 ,000, and was suspiciously dilatory in outfitting and provi sioning them and arranging for their transportation to the embarkation point. It has even been suggested that Parma, sensing a disaster in the making, never meant to risk his army at all. In addition to these strategic considerations, Medina Sidonia had a number

Philip II.far left, believed deeply in the cause of bringing Protestant England and Holland back under Roman Catholic control. His was a tightly ordered world, where authority flowed directly from God to the Pope and the king , and through the hierarchies of the church and the nobility to the people. Don Alonso, Duke of Medina Sidonia , second from left, commanded officers chosen as much for their noble rank as their ancestry. The system allowed little flexibility and f ew options for king or commander. Elizabeth reigned over a people who had a free r and more open tradition. It was Francis Drake who had said, "/will have the gentleman to haul and draw with the mariner .. ." And he meant it. Drake himself(second from right) had come from modest beginnings and was advanced because of his genius. It was ideas from men like Drake and Ha wkins that led to the new design of English warships and their stunning effectiveness in action.