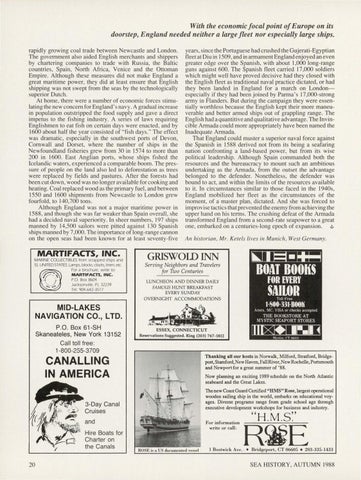 With the economic focal point of Europe on its doorstep, England needed neither a large fleet nor especially large ships. rapidly growing coal trade between Newcastle and London. The government also aided English merchants and shippers by chartering companies to trade with Russia, the Baltic countries, Spain, North Africa, Venice and the Ottoman Emp ire. Although these measures did not make England a great maritime power, they did at least ensure that English shipping was not swept from the seas by the technologically superior Dutch. At home, there were a number of economic forces stimulating the new concern for England's navy . A gradual increase in population outstripped the food supply and gave a direct impetus to the fishing industry . A series of laws requiring Engli shmen to eat fish on certain days were enacted, and by 1600 about half the year consisted of "fi sh days." The effect was dramatic, especially in the southwest ports of Devon , Cornwall and Dorset, where the number of ships in the Newfoundland fisheries grew from 30 in 1574 to more than 200 in 1600. East Anglian ports, whose ships fished the Icelandic waters, experienced a comparable boom. The pressure of people on the land also led to deforestation as trees were replaced by fields and pastures. After the forests had been cut down, wood was no longer avai lable for cooking and heating. Coal replaced wood as the primary fuel, and between 1550 and 1600 shipments from Newcastle to London grew fo urfo ld , to 140,700 tons. Although England was not a major maritime power in 1588, and though she was far weaker than Spain overall, she had a decided naval superiority. In sheer numbers, 197 ships manned by 14,500 sailors were pitted against 130 Spanish ships manned by 7,000. The importance of long-range cannon on the open seas had been known for at least seventy-five

years, since the Portuguese had crushed the Gujerati-Egyptian fleet at Di u in 1509, and in armament England enjoyed an even greater edge over the Spanish, with about 1,000 long-range guns against 600. The Spanish fleet carried 17 ,000 soldiers which might well have proved decisive had they closed with the English fleet as traditional naval practice dictated, or had they been landed in England for a march on Londonespeciall y if they had been joined by Parma 's 17,000-strong army in Flanders. But during the campaign they were essentially worthless because the English kept their more maneuverable and better armed ships out of grappling range. The English had a quantitive and qualitative advantage. The Invincible Armada could more appropriately have been named the Inadequate Armada. That England could muster a superior naval force against the Spanish in 1588 derived not from its being a seafaring nation confronting a land-based power, but from its wise political leadership. Although Spain commanded both the resources and the bureaucracy to mount such an ambitious undertaking as the Armada, from the outset the advantage belonged to the defender. Nonetheless, the defender was bound to act, and within the limits of the resources available to it. In circumstances similar to those faced in the 1940s, England mobilized her fleet as the circumstances of the moment, of a master plan, dictated. And she was forced to improvise tactics that prevented the enemy from achieving the upper hand on his terms. The crushing defeat of the Armada transformed England from a second-rate seapower to a great one, embarked on a centuries-long epoch of expansion. .ti

Thanking all our hosts in Norwalk, Milford, Stratford, Bridgeport,Stamford,New Haven, FallRiver,New Rochelle,Portsmouth and Newport for a great summer of '88. Now planning an exciting 1989 schedule on the North Atlantic seaboard and the Great Lakes. The new Coast Guard Certified "HMS" Rose, largest operational wooden sailing ship in the world, embarks on educational voyages. Diverse programs range from grade school age through executive development workshops for business and industry. For information write or call: