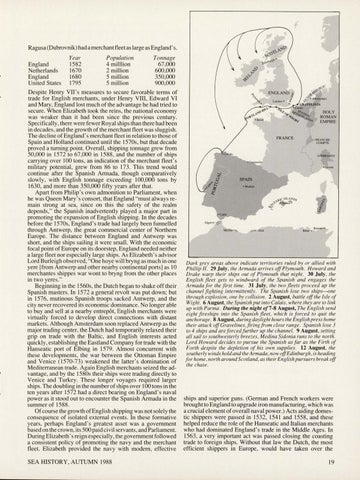 Despite Henry VII 's measures to secure favorable terms of trade for English merchants, under Henry VIII, Edward VI and Mary , England lost much of the advantage he had tried to secure. When Elizabeth took the reins, the national economy was weaker than it had been since the previous century. Specifically, there were fewer Royal ships than there had been in decades, and the growth of the merchant fleet was sluggish. The decline of England's merchant fleet in relation to those of FRANCE - FRA NCHE Spain and Holland continued until the 1570s, but that decade COMPTE proved a turning point. Overall, shipping tonnage grew from 50,000 in 1572 to 67,000 in 1588, and the number of ships LOMBARDY carrying over 100 tons, an indication of the merchant fleet ' s â&#x20AC;˘ Genoa military potential , grew from 86 to 173. This trend would continue after the Spanish Armada, though comparatively slowly, with English tonnage exceeding 100,000 tons by 1630, and more than 350,000 fifty years after that. Apart from Philip 's own admonition to Parliament, when he was Queen Mary 's consort, that England "must always remain strong at sea, since on this the safety of the realm depends," the Spanish inadvertently played a major part in promoting the expansion of English shipping. In the decades before the 1570s, England ' s trade had largely been funnelled Bizer1e Melilla Oran 86ne.,,.through Antwerp, the great commercial center of Northern Europe. The distance between England and Antwerp was short, and the ships sailing it were small. With the economic focal point of Europe on its doorstep, England needed neither a large fleet nor especially large ships. As Elizabeth's advisor Lord Burleigh observed, "One hoye will bryng as much in one Dark grey areas above indicate territories ruled by or allied with yere [from Antwerp and other nearby continental ports] as 10 Phillip II. 29 July, the Armada arrives off Plymouth . Howard and merchantes shippes war wont to bryng from the other places Drake warp their ships out of Plymouth that night. 30 July, the English fl eet gets to windward of the Spanish and engages the in two yeres." Armada/or the first time. 31 July, the two fleets proceed up the Beginning in the 1560s, the Dutch began to shake off their channel fighting intermittently. The Spanish lose two ships-one Spanish masters. In 1572 a general revolt was put down; but through explosion, one by collision. 2 August, battle off the Isle of in 1576, mutinous Spanish troops sacked Antwerp, and the Wight. 6 August, the Spanish put into Calais, where they are to link city never recovered its economic dominance. No longer able up with Parma . During the night o/7-8 August, The English send to buy and sell at a nearby entrep6t, English merchants were eight fireships into the Spanish fleet, which is f orced to quit the virtually forced to develop direct connections with distant anchorage. 8 August, during daylight hours the English press home markets. Although Amsterdam soon replaced Antwerp as the their attack off Gravelines, firing from close range. Spanish lose 3 major trading center, the Dutch had temporarily relaxed their to 4 ships and are forced further up the channel. 9 August, setting grip on trade with the Baltic, and English interests acted all sail to southwesterly breezes , Medina Sidonia runs to the north. lord Howard decides to pursue the Spanish as far as the Firth of quickly, establishing the Eastland Company for trade with the Forth despite the depletion of his own supplies . 12 August, the Hanseatic port of Elbing in 1579. Almost concurrent with southerly winds hold and the Armada, now offEdinburgh, is heading these developments, the war between the Ottoman Empire and Venice (1570-73) weakened the latter's domination of for home, north around Scotland, as their English pursuers break off the chase. Mediterranean trade. Again English merchants seized the advantage, and by the 1580s their ships were trading directly to Venice and Turkey. These longer voyages required larger ships . The doubling in the number of ships over 100 tons in the ten years after 1572 had a direct bearing on England's naval power as it stood out to encounter the Spanish Armada in the ships and superior guns. (German and French workers were brought to England to upgrade iron manufacturing, which was summer of 1588. Of course the growth of English shipping was not solely the a crucial element of overall naval power.) Acts aiding domesconsequence of isolated external events. In these formative tic shippers were passed in 1532, 1541 and 1558, and these years, perhaps England 's greatest asset was a government helped reduce the role of the Hanseatic and Italian merchants based on the crown, its 500 paid civil servants, and Parliament. who had dominated England's trade in the Middle Ages. In During Elizabeth ' s reign especially, the government followed 1563, a very important act was passed closing the coasting a consistent policy of promoting the navy and the merchant trade to foreign ships. Without that law the Dutch, the most fleet. Elizabeth provided the navy with modem, effective efficient shippers in Europe, would have taken over the SEA HISTORY, AUTUMN 1988