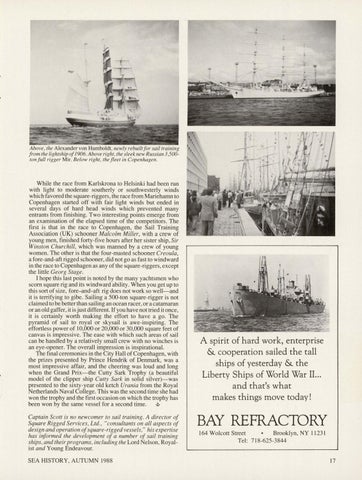 Above, the Alexander von Humboldt, newly rebuilt for sail training from the lightship of1906. Above right, the sleek new Russian 3 ,500ton full rigger Mir. Below right, the fleet in Copenhagen.

While the race from Karlskrona to Helsinki had been run with light to moderate southerly or southwesterly winds which favored the square-riggers, the race from Mariehamn to Copenhagen started off with fair light winds but ended in several days of hard head winds which prevented many entrants from finishing. Two interesting points emerge from an examination of the elapsed time of the competitors. The first is that in the race to Copenhagen, the Sail Training Association (UK) schooner Malcolm Miller, with a crew of young men, finished forty-five hours after her sister ship, Sir Winston Churchill, which was manned by a crew of young women. The other is that the four-masted schooner Creoula, a fore-and-aft rigged schooner, did not go as fast to windward in the race to Copenhagen as any of the square-riggers, except the little Georg Stage. I hope this last point is noted by the many yachtsmen who scorn square rig and its windward ability. When you get up to this sort of size, fore...,and-aft rig does not work so well-and it is terrifying to gibe. Sailing a 500-ton square-rigger is not claimed to be better than sailing an ocean racer, or a catamaran or an old gaffer, it is just different. If you have not tried it once, it is certainly worth making the effort to have a go. The pyramid of sail to royal or skysail is awe-inspiring. The effortless power of 10,000 or 20,000 or 30,000 square feet of canvas is impressive. The ease with which such areas of sail can be handled by a relatively small crew with no winches is an eye-opener. The overall impression is inspirational. The final ceremonies in the City Hall of Copenhagen, with the prizes presented by Prince Hendrik of Denmark, was a most impressive affair, and the cheering was loud and long when the Grand Prix-the Cutty Sark Trophy (a beautiful model of the clipper ship Cutty Sark in solid silver)-was presented to the sixty-year old ketch Urania from the Royal Netherlands Naval College. This was the second time she had won the trophy and the first occasion on which the trophy has .t> been won by the same vessel for a second time.

Captain Scott is no newcomer to sail training. A director of Square Rigged Services, Ltd. , "consultants on all aspects of design and operation of square-rigged vessels," his expertise has informed the development of a number of sail training ships, and their programs, including the Lord Nelson, Royalist and Young Endeavour. SEA HISTORY, AUTUMN 1988