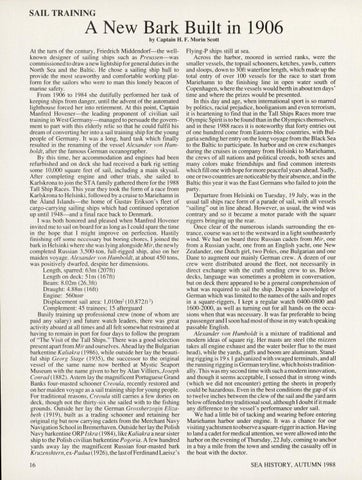 At the tum of the century, Friedrich Middendorf-the wellknown designer of sailing ships such as Preussen-was commissioned to draw a new lightship for general duties in the North Sea and the Baltic. He chose a sailing ship hull to provide the most seaworthy and comfortable working platfonn for the sailors who were to man this lonely beacon of marine safety . From 1906 to 1984 she dutifully performed her task of keeping ships from danger, until the advent of the automated lighthouse forced her into retirement. At this point, Captain Manfred Havener-the leading proponent of civilian sail training in West Gennany-managed to persuade the government to part with this elderly relic so that he could fulfil his dream of converting her into a sail training ship for the young people of Gennany. It was a long, hard task which finally resulted in the renaming of the vessel Alexander von Humboldt, after the famous German oceanographer. By this time, her accommodation and engines had been refurbished and on deck she had received a bark rig setting some I 0,000 square feet of sai l, including a main skysail. After completing engine and other trials, she sailed to Karlskrona to join the STA family gathered there for the 1988 Tall Ship Races. This year they took the form of a race from Karl skrona to Hel si nki , followed by a cruise to Mariehamn in the Aland Islands-the home of Gustav Erikson&#39;s fleet of cargo-carrying sailing ships which had continued operation up unti I 1948-and a final race back to Denmark. l was both honored and pleased when Manfred Havener invited me to sail on board for as long as I could spare the time in the hope that I might improve on perfection. Hastily finishing off some necessary but boring chores, I joined the bark in Hel si nki where she was lying alongside Mir, the newly completed Russian 3,500-ton, full-rigged ship, also on her maiden voyage. Alexander von Humboldt, at about 450 tons, was positively dwarfed, despite her dimensions. Length, sparred: 63m (207ft) Length on deck : 51 m (l 67ft) Beam: 8.02m (26.3ft) Draught: 4.88m ( l 6ft) Engine: 560BHP Displacement sail area: l,010m 2 (10,872Jt 2) Complement: 45 trainees; 15 afterguard Busily training up professional crew (none of whom are paid any salary) and future watch leaders, there was great activity aboard at all times and all felt somewhat restrained at having to remain in port for four days to follow the program of &quot;The Visit of the Tall Ships.&quot; There was a good selection present apart from Mir and ourselves. Ahead lay the Bulgarian barkentine Kaliakra (l 986), while outside her lay the beautiful ship Georg Stage (1935), the successor to the original vessel of the same name now berthed at Mystic Seaport Museum with the name given to her by Alan Villiers, Joseph Conrad ( 1882). Astern lay the magnificent Portuguese Grand Banks four-masted schooner Creoula, recently restored and on her maiden voyage as a sail training ship for young people. For traditional reasons, Creoula still carries a few dories on deck, though not the thirty-six she sailed with to the fishing grounds. Outside her lay the Gennan Grossherzogin Elizabeth ( 1919), built as a trading schooner and retaining her original rig but now carrying cadets from the Merchant Navy Navigation School in Bremerhaven. Outside her lay the Polish Navy barkentine ORP Iskra (1984), likeKaliakra a near sister ship to the Polish civilian barkentine Pogoria. A few hundred yards away lay the magnificent Russian four-masted bark Kruzenshtern, ex-Padua (1926), the lastofFerdinand Laeisz&#39;s 16

Flying-P ships still at sea. Across the harbor, moored in serried ranks, were the smaller vessels, the topsail schooners, ketches, yawls, cutters and sloops, down to 30ft waterline length, which made up the total entry of over 100 vessels for the race to start from Mariehamn to the finishing line in open water south of Copenhagen, where the vessels would berth in about ten days&#39; time and where the prizes would be presented. In this day and age, when international sport is so marred by politics, racial prejudice, hooliganism and even terrorism, it is heartening to find that in the Tall Ships Races more true Olympic Spirit is to be found than in the Olympics themselves, and in these 1988 races it is noteworthy that forty entries out of one hundred come from Eastern-bloc countries, with Bulgaria sending her entry on the long voyage from the Black Sea to the Baltic to participate. In harbor and on crew exchanges during the cruises in company from Helsinki to Mariehamn, the crews of all nations and political creeds, both sexes and many colors make friendships and find common interests which fill one with hope for more peaceful years ahead. Sadly, one or two countries are noticeable by their absence, and in the Baltic this year it was the East Germans who failed to join the party. Departure from Helsinki on Tuesday, 19 July, was in the usual tall ships race fonn of a parade of sail, with all vessels &quot;sailing&quot; out in line ahead. However, as usual, the wind was contrary and so it became a motor parade with the square riggers bringing up the rear. Once clear of the numerous islands surrounding the entrance, course was set to the westward in a light southeasterly wind. We had on board three Russian cadets from Mir, one from a Russian yacht, one from an English yacht, one New Zealander, one Dutch girl, two Poles, one Bulgarian and one Dane to augment our mainly German crew. A dozen of our crew were distributed around the fleet, not necessarily in direct exchange with the craft sending crew to us. Below decks, language was sometimes a problem in conversation, but on deck there appeared to be a general comprehension of what was required to sail the ship. Despite a knowledge of German which was limited to the names of the sails and ropes in a square-riggers, I kept a regular watch 0400-0800 and 1600-2000, as well as turning out for all hands on the occasions when that was necessary. It was far preferable to being a passenger and I soon had most of those in my watch speaking passable English. Alexander von Humboldt is a mixture of traditional and modem ideas of square rig. Her masts are steel (the mizzen takes all engine exhaust and the water boiler flue to the mast head), while the yards, gaffs and boom are aluminum. Standing rigging is 19 x 1 galvanized with swaged terminals, and all the running rigging is German teryline, which hoists traditionally. This was my second time with such a modem innovation, and though it seems acceptable, I sensed that in strong winds (which we did not encounter) getting the sheets in properly could be hazardous. Even in the best conditions the gap of six to twelve inches between the clew of the sail and the yard arm below offended my traditional soul, although I doubt if it made any difference to the vessel&#39;s performance under sail. We had a little bit of tacking and wearing before entering Mariehamn harbor under engine. It was a chance for our visiting yachtsmen to observe a square-rigger in action. Having to land a cadet for medical attention, we were allowed into the harbor on the evening of Thursday, 22 July, coming to anchor in a bay a mile from the town and sending the casualty off in the boat with the doctor. SEA HISTORY, AUTUMN 1988