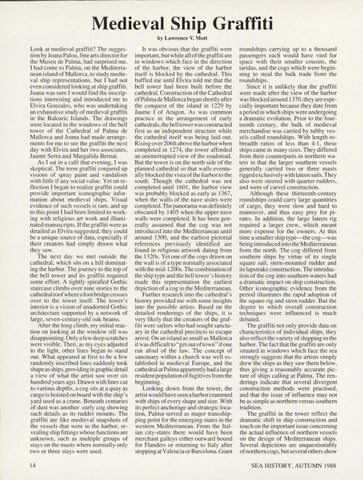 Look at medieval graffiti? The suggestion by Joana Palou, fine arts director for the Museu de Palma, had surprised me. I had come to Palma, on the Mediterranean island ofMallorca, to study medieval ship representations, but I had not even considered looking at ship graffiti. Joana was sure I would find the inscriptions interesting and introduced me to Elvira Gonzales, who was undertaking an exhaustive study of medieval graffiti in the Balearic Islands. The drawings were located in the windows of the bell tower of the Cathedral of Palma de Mallorca and Joana had made arrangements for me to see the graffiti the next day with Elvira and her two associates, Jaume Serra and Margalida Bernat. As I sat in a cafe that evening, I was skeptical. The term graffiti conjured up visions of spray paint and vandalism with little if any social value. Yet on reflection I began to realize graffiti could provide important iconographic information about medieval ships. Visual evidence of such vessels is rare, and up to this point I had been limited to working with religious art work and illuminated manuscripts. If the graffiti were as detailed as Elvira suggested, they could be a unique source of data, especially if their creators had simply drawn what they saw. The next day we met outside the cathedral, which sits on a hill dominating the harbor. The journey to the top of the bell tower and its graffiti required some effort. A tightly spiralled Gothic staircase climbs over nine stories to the cathedral roof where a foot bridge crosses over to the tower itself. The tower's interior is a vision of unadorned Gothic architecture supported by a network of large, seven-century-old oak beams. After the long climb, my initial reaction on looking at the window sill was disappointing. Only a few deep scratches were visible. Then, as my eyes adjusted to the light, other lines began to stand out. What appeared at first to be a few randomly inscribed lines suddenly took shape as ships, providing in graphic detail a view of what the artist saw over six hundred years ago. Drawn with lines cut to various depths, a cog sits at a quay as cargo is hoisted on board with the ship's yard used as a crane. Beneath centuries of dust was another early cog showing such details as its rudder mounts. The graffiti are like medieval snapshots of the vessels that were in the harbor, revealing ship fittings whose functions are unknown, such as multiple groups of stays on the masts where normally only two or three stays were used. 14

It was obvious that the graffiti were important, but while all of the graffiti are in windows which face in the direction of the harbor, the view of the harbor itself is blocked by the cathedral. This baffled me until Elvira told me that the bell tower had been built before the cathedral. Construction of the Cathedral of Palma de Mallorca began short! y after the conquest of the island in 1229 by Jaume I of Aragon. As was common practice in the arrangement of early cathedrals, the bel I tower was constructed first as an independent structure while the cathedral itself was being laid out. Rising over 206ft above the harbor when completed in 1274, the tower afforded an uninterrupted view of the roadstead. But the tower is on the north side of the planned cathedral so that walls eventually blocked the vista of the harbor to the south. Though the cathedral was not completed until 1601, the harbor view was probably blocked as early as 1367, when the walls of the nave aisles were completed. The panorama was definitely obscured by 1405 when the upper nave walls were completed. It has been generally assumed that the cog was not introduced into the Mediterranean until around 1300, and the earliest pictorial references previously identified are found in religious artwork dating from the 1320s. Yet one of the cogs drawn on the wall is of a type normally associated with the mid- l 200s. The combination of the ship type and the bell tower's history made this representation the earliest depiction of a cog in the Mediterranean. Further research into the cathedral's history provided me with some insights into the possible artists. Based on the detailed renderings of the ships, it is very likely that the creators of the graffiti were sailors who had sought sanctuary in the cathedral precincts to escape arrest. On an island as small as Mallorca it was difficult to "get out of town" if one ran afoul of the law. The concept of sanctuary within a church was well established in medieval Europe, and the cathedral at Palma apparently had a large resident population offugitives from the beginning. Looking down from the tower, the artist would have seen a harbor crammed with ships of every shape and size. With its perfect anchorage and strategic location, Palma served as major transshipping point for the emerging states in the western Mediterranean. From the Italian city-states there would have been merchant galleys either outward bound for Flanders or returning to Italy after stopping at Valencia or Barcelona. Giant

roundships carrying up to a thousand passengers each would have vied for space with their smaller cousins, the taridas, and the cogs which were beginning to steal the bulk trade from the roundships. Since it is unlikely that the graffiti were made after the view of the harbor was blocked around 1370, they are especially important because they date from a period in which ships were undergoing a dramatic evolution. Prior to the fourteenth century, the bulk of medieval merchandise was carried by tubby vessels called roundships. With length-tobreadth ratios of less than 4: 1, these ships came in many sizes. They differed from their counterparts in northern waters in that the larger southern vessels generally carried two or three masts rigged exclusively with lateen sails. They also were steered with quarter rudders, and were of carve! construction. Although these thirteenth-century roundships could carry large quantities of cargo, they were slow and hard to maneuver, and thus easy prey for pirates. In addition, the large lateen rig required a larger crew, which meant more expense for the owners. At this time a smaller ship type-the cog-was being introduced into the Mediterranean from the north. The cog differed from southern ships by virtue of its single square sail, stern-mounted rudder and its lapstrake construction. The introduction of the cog into southern waters had a dramatic impact on ship construction. Other iconographic evidence from the period illustrates the rapid adoption of the square rig and stern rudder. But the degree to which overall construction techniques were influenced is much debated. The graffiti not only provide data on characteristics of individual ships, they also reflect the variety of shipping in the harbor. The fact that the graffiti are only situated in windows which face the sea strongly suggests that the artists simply drew the ships as they saw them below, thus giving a reasonably accurate picture of ships calling at Palma. The renderings indicate that several divergent construction methods were practised, and that the issue of influence may not be as simple as northern versus southern tradition. The graffiti in the tower reflect the dramatic shift in ship construction and touch on the important issue concerning the actual influence of northern vessels on the design of Mediterranean ships. Several depictions are unquestionably of northern cogs, but several others show SEA HISTORY, AUTUMN 1988