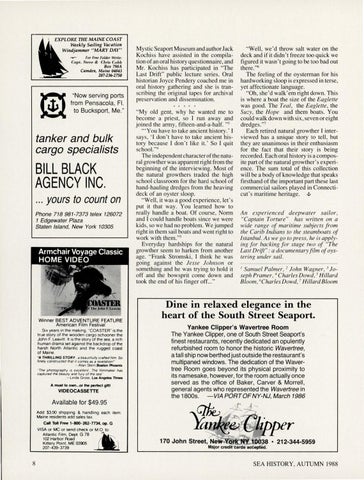 "Now serving ports from Pensacola, Fl. to Bucksport, Me."

Winner BEST ADVENTURE FEATURE American Film Festival Six years in the making , "COASTER" is the true story of the wooden cargo schooner the John F. Leavitt . It is the story of the sea . a ri ch human drama set against the backdrop of the harsh North Atlantic and the rugged coast of Maine. "A THRILLING STORY... a beaut>fully crafted film . So finely constructed that it comes as a revelation.I"

A muat to own ...or the perfect gift!

Mystic Seaport Museum and author Jack Kochiss have assisted in the compilation of an oral history questionnaire, and Mr. Kochiss has participated in "The Last Drift" public lecture series. Oral hi storian Joyce Pendery coached me in oral history gatheri ng and she is transcribing the original tapes for archival preservation and dissemination . "My old gent, why he wanted me to become a priest, so I run away and joined the army, fifteen-and-a-half. " 3 '"You have to take ancient hi story.' I says, ' I don ' t have to take ancient hi story because I don ' t li ke it. ' So I quit school. " 4 The independent character of the natural growther was apparent right from the beginning of the interv iewing. Most of the natural growthers traded the high school classroom for the hard school of hand-hauling dredges from the heaving deck of an oyster sloop. "Well , it was a good experience, let ' s put it that way . You learned how to really handle a boat. Of course, Norm and I could handle boats since we were kids, so we had no problem. We jumped right in them sail boats and went right to work with them."5 Everyday hardships for the natural growther seem to harken from another age. "Frank Stromski, I think he was going agai nst the Jesse Johnson or something and he was trying to hold it off and the bowsprit come down and took the end of hi s finger off. .. "

"Well, we'd throw salt water on the deck and if it didn't freeze too quick we figured it wasn' t go ing to be too bad out there."6 The feeling of the oysterman for his hardworking sloop is expressed in terse, yet affectionate language. "Oh , she'd walk 'em right down. This is where a boat the size of the Eaglette was good. The Teal, the Eaglette, the Suzy, the Hope and them boats. You could walk down with six, seven or eight dredges." 7 Each retired natural growther I interviewed has a unique story to tell, but they are unanimous in their enthusiasm fo r the fact that their story is being recorded. Each oral history is a composite part of the natu ral growther' s experience. The sum total of this collection will be a body of knowledge that speaks Âˇ firsthand of the important part these last commercial sailors played in Connecticut ' s maritime heritage. .i..

An experienced deepwater sailor, "Captain Torture" has written on a wide range of maritime subjects from the Carib Indians to the steamboats of Istanbul. As we go to press, he is applying for backing for stage two of "The Last Drift" : a documentary film of oystering under sail. 1

Dine in relaxed elegance in the heart of the South Street Seaport. Yankee Clipper's Wavertree Room The Yankee Clipper, one of South Street Seaport's finest restaurants , recently dedicated an opulently refurbished room to honor the historic Wavertree, a tall ship now berthed just outside the restaurant's multipaned windows. The dedication of the Wavertree Room goes beyond its physical proximity to its namesake, however, for the room actually once served as the office of Baker, Carver & Morrell , general agents who represented the Wavertree in the 1800s. -VIA PORT OF NY-NJ, March 1986