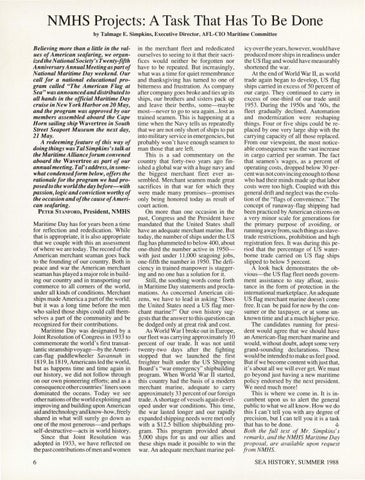 NMHS Projects: A Task That Has To Be Done by Talmage E. Simpkins, Executive Director, AFL-CIO Maritime Committee

Believing more than a little in the values of American seafaring, we organized the National Society's Twenty-fifth Anniversary Annual Meeting as part of National Maritime Day weekend. Our call for a national educational program called "The American Flag at Sea" was announced and distributed to all hands in the official Maritime Day cruise in New York Harbor on 20 May, and the program was approved by our members assembled aboard the Cape Horn sailing ship Wavertree in South Street Seaport Museum the next day, 21 May. A redeeming feature of this way of doing things was TalSimpkins's talk at the Maritime Alliance forum convened aboard the Wavertree as part of our annual meeting. Tal'saddress, in somewhat condensed form below, offers the rationale for the program we had proposed to the world the day before-with passion, logic and conviction worthy of the occasion and ofthe cause ofAmerican seafaring.

PETER STANFORD, President, NMHS Maritime Day has for years been a time for reflection and rededication. While that is appropriate, it is also appropriate that we couple with this an assessment of where we are today. The record of the American merchant seaman goes back to the founding of our country. Both in peace and war the American merchant seaman has played a major role in building our country and in transporting our commerce to all comers of the world, under all kinds of conditions. Merchant ships made America a part of the world; but it was a long time before the men who sailed those ships could call themselves a part of the community and be recognized for their contributions. Maritime Day was designated by a Joint Resolution of Congress in 1933 to commemorate the world's first transatlantic steamship voyage- by the American-flag paddlewheeler Savannah in 1819. In 1819, Americans led the world, but as happens time and time again in our history, we did not follow through on our own pioneering efforts; and as a consequence other countries' liners soon dominated the oceans. Today we see other nations of the world exploiting and improving and building upon American aid and technology and know-how, freely shared in what will surely go down as one of the most generous-and perhaps self-destructive-acts in world history. Since that Joint Resolution was adopted in 1933, we have reflected on the past contributions of men and women

in the merchant fleet and rededicated ourselves to seeing to it that their sacrifices would neither be forgotten nor have to be repeated. But increasingly, what was a time for quiet remembrance and thanksgiving has turned to one of bitterness and frustration. As company after company goes broke and ties up its ships, our brothers and sisters pack up and leave their berths, some-maybe most-never to go to sea again ...lost as trained seamen. This is happening at a time when the Navy tells us repeatedly that we are not only short of ships to put into military service in emergencies, but probably won't have enough seamen to man those that are left. This is a sad commentary on the country that forty-two years ago finished a global war with a huge navy and the biggest merchant fleet ever assembled. Merchant seamen made great sacrifices in that war for which they were made many promises-promises only being honored today as result of court action. On more than one occasion in the past, Congress and the President have mandated that the United States shall have an adequate merchant marine. But today, the number of ships under the US flag has plummeted to below 400, about one-third the number active in 1950-with just under 11,000 seagoing jobs, one-fifth the number in 1950. The deficiency in trained manpower is staggering and no one has a solution for it. Still, the soothing words come forth in Maritime Day statements and proclamations. As concerned American citizens, we have to lead in asking "Does the United States need a US flag merchant marine?" Our own history suggests that the answer to this question can be dodged only at great risk and cost. As World War I broke out in Europe, our fleet was carrying approximately 10 percent of our trade. It was not until twenty-two days after the fighting stopped that we launched the first freighter built under the US Shipping Board's "war emergency" shipbuilding program. When World War II started, this country had the basis of a modem merchant marine, adequate to carry approximately 33 percent of our foreign trade. A shortage of vessels again developed under war conditions. Thi s time, the war lasted longer and our rapidly expanded shipping needs were met only with a $12.5 billion shipbuilding program. This program provided about 5,000 ships for us and our allies and these ships made it possible to win the war. An adequate merchant marine pol-

icy over the years, however, would have produced more ships in readiness under the US flag and would have measurably shortened the war. At the end of World War II, as world trade again began to develop, US flag ships carried in excess of 50 percent of our cargo. They continued to carry in excess of one-third of our trade until 1953. During the 1950s and '60s, the fleet gradually declined. Automation and modernization were reshaping things . Four or five ships could be replaced by one very large ship with the carrying capacity of all those replaced. From our viewpoint, the most noticeable consequence was the vast increase in cargo carried per seaman. The fact that seamen's wages, as a percent of operating costs, dropped below 30 percent was not convincing enough to those who had their minds made up that labor costs were too high. Coupled with this general drift and neglect was the evolution of the "flags of convenience." The concept of runaway-flag shipping had been practiced by American citizens on a very minor scale for generations for the primary purpose of avoiding, or running away from, such things as slavetrade restrictions, prohibition and high registration fees. It was during this period that the percentage of US waterborne trade carried on US flag ships slipped to below 5 percent. A look back demonstrates the obvious-the US flag fleet needs government assistance to stay afloat, assistance in the form of protection in the international marketplace. An adequate US flag merchant marine doesn't come free. It can be paid for now by the consumer or the taxpayer, or at some unknown time and at a much higher price. The candidates running for president would agree that we should have an American-flag merchant marine and would, without doubt, adopt some very grand-sounding declarations. These would be intended to make us feel good. But if we become content with just that, it's about all we will ever get. We must go beyond just having a new maritime policy endorsed by the next president. We need much more! This is where we come in. It is incumbent upon us to alert the general public to what we all know . How we do this I can't tell you with any degree of precision, but I can tell you it is a task that has to be done. <1' Both the full text of Mr. Simpkins' s remarks, and the NMHS Maritime Day proposal, are available upon request fromNMHS. SEA HISTORY, SUMMER 1988