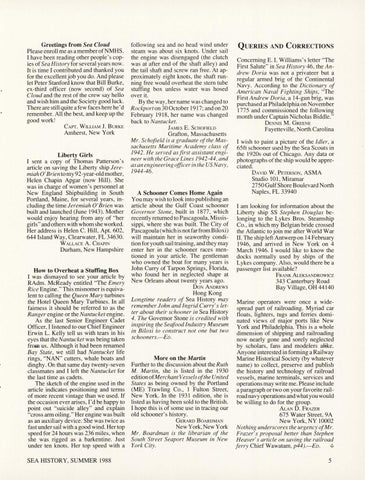 Greetings from Sea Cloud Please enroll me as a memberofNMHS. I have been reading other people 's copies of Sea History for several years now. It is time I contributed and thanked you for the excellent job you do. And please let Peter Stanford know that Bill Burke, ex-third officer (now second) of Sea Cloud and the rest of the crew say hello and wish him and the Society good luck. There are still quite a few faces here he ' d remember. All the best, and keep up the good work! CAPT. WILLIAM J. BURKE Amherst, New York

Liberty Girls I sent a copy of Thomas Patterson ' s article on saving the Liberty ship Jeremiah 0 ' Brien to my 92-year-old mother, Helen Chapin Apgar (now Hill). She was in charge of women ' s personnel at New England Shipbuilding in South Portland, Maine, for several years, including the time Jeremiah O' Brien was built and launched (June 1943). Mother would enjoy hearing from any of " her girls" and others with whom she worked. Her address is Helen C. Hill, Apt. 602, 644 Island Way, Clearwater, FL 34630. wALLACE A. CHAPIN Durham, New Hampshire

How to Overheat a Stuffing Box I was dismayed to see your article by RAdm. McReady entitled ''The Emery Rice Engine." Thi s misnomer is equivalent to calling the Queen Mary turbines the Hotel Queen Mary Turbines. In all fairness it should be referred to as the Ranger engine or the Nantucket engine. As the last Senior Engineer Cadet Officer, I listened to our Chief Engineer Erwin L. Kelly tell us with tears in his eyes that the Nantucket was being taken from us. Although it had been renamed Bay State, we still had Nantucket life rings , "NAN" cutters, whale boats and dinghy. On that same day twenty-seven classmates and I left the Nantucket for the last time as cadets. The sketch of the engine used in the article indicates positioning and terms of more recent vintage than we used. If the occasion ever arises, I'd be happy to point out "suicide alley" and explain "cross arm oiling." Her engine was built as an auxiliary device. She was twice as fast under sail with a good wind. Her top speed for 24 hours was 236 miles, when she was rigged as a barkentine. Just under ten knots. Her top speed with a SEA HISTORY , SUMMER 1988

following sea and no head wind under steam was about six knots . Under sail the engine was disengaged (the clutch was at after end of the shaft alley) and the tail shaft and screw ran free. At approximately eight knots, the shaft running free would overheat the stem tube stuffing box unless water was hosed over it. By the way, her name was changed to Rockport on 30October1 9 17; and on 20 February 1918 , her name was changed back to Nantucket. JAMES E. SCHOFIELD Grafton, Massachusetts Mr . Schofield is a graduate of the Massachusetts Maritime Academy class of 1942. He served as first assistant engineer with the Grace Lines 1942-44 , and as an engineering officer in the US Navy , 1944-46.

A Schooner Comes Home Again You may wish to look into publishing an article about the Gulf Coast schooner Governor Stone, built in 1877, which recently returned to Pascagoula, Mississippi , where she was built. The City of Pascagoula (which is not far from Biloxi) will maintain her in seaworthy condition for youth sail training, and they may enter her in the schooner races mentioned in your article. The gentleman who owned the boat for many years is John Curry of Tarpon Springs, Florida, who found her in neglected shape at New Orleans about twenty years ago. DON ANDREWS Hong Kong Longtime readers of Sea Hi story may remember John and Ingrid Curry's letter about their schooner in Sea History 4. The Governor Stone is credited with inspiring the Seafood Industry Museum in Biloxi to construct not one but two schooners.-Eo.

More on the Martin Further to the discussion about the Ruth M. Martin , she is listed in the 1930 edition of Merchant Vessels ofthe United States as being owned by the Portland (ME) Trawling Co. , 1 Fulton Street, New York. In the 193 1 edition, she is listed as having been sold to the British. I hope this is of some use in tracing our old schooner's history. GERARD BOARDMAN New York, New York Mr. Boardman is the librarian of the South Street Seaport Museum in New York City.

QUERIES AND CORRECTIONS Concerning E. I. Williams ' s letter "The First Salute" in Sea History 46, the Andrew Doria was not a privateer but a regular armed brig of the Continental Navy. According to the Dictionary of American Naval Fighting Ships, "The First Andrew Doria, a 14-gun brig, was purchased at Philadelphia on November 1775 and commissioned the following month under Captain Nicholas Biddle." DENNIS M. GREENE Fayetteville, North Carolina I wish to paint a picture of the Idler, a 65ft schooner used by the Sea Scouts in the 1920s out of Chicago. Any data or photographs of the ship would be appreciated. DAVID w. PETERSON, ASMA Studio 101 , Miramar 27 50 Gulf Shore Boulevard North Naples, FL 33940 I am looking for information about the Liberty ship SS Stephen Douglas belonging to the Lykes Bros. Steamship Co. , in which my Belgian bride crossed the Atlantic to join me after World War II. The ship left Antwerp on 14 February 1946, and arrived in New York on 4 March 1946. I would like to know the docks normally used by ships of the Lykes company. Also, would there be a passenger list available? FRANKALEKSANDROWICZ 343 Canterbury Road Bay Village, OH 44140 Marine operators were once a widespread part of railroading. Myriad car floats, lighters, tugs and ferries dominated views of major ports like New York and Philadelphia. This is a whole dimension of shipping and railroading now nearly gone and sorely neglected by scholars, fans and modelers alike. Anyone interested in forming a Railway Marine Historical Society (by whatever name) to collect, preserve and publish the history and technology of railroad vessels, marine terminals, services and operations may write me. Please include a paragraph or two on your favorite railroad navy operations and what you would be willing to do for the group. ALAN D. FRAZER 675 Water Street, 9A New York, NY 10002 Nothing underscores the urgency of Mr. Frazer's proposal better than Stephen Heaver' s article on saving the railroad ferry Chief Wawatam, p44 ).-Eo. '1t