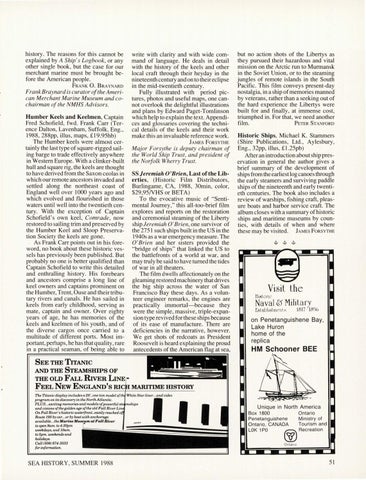 history . The reasons for this cannot be explained by A Ship's Logbook, or any other single book, but the case for our merchant marine must be brought before the American people. FRANK 0. BRA YNARD Frank Braynard is curator ofthe American Merchant Marine Museum and cochairman of the NMHS Advisors. Humber Keels and Keelmen, Captain Fred Schofield, fwd. Frank Carr (Terence Dalton, Lavenham, Suffolk, Eng., 1988, 288pp, illus, maps, £19.95hb) The Humber keels were almost certainly the last type of square-rigged sailing barge to trade effectively anywhere in Western Europe. With a clinker-built hull and square rig, the keels are thought to have derived from the Saxon ceolas in which our remote ancestors invaded and settled along the northeast coast of England well over 1000 years ago and which evolved and flouri shed in those waters until well into the twentieth century. With the exception of Captain Schofield's own keel , Comrade, now restored to sailing trim and preserved by the Humber Keel and Sloop Preservation Society the keels are gone. As Frank Carr points out in his foreword, no book about these historic vessels has previously been published. But probably no one is better qualified than Captain Schofield to write this detailed and enthralling history. His forebears and ancestors comprise a long line of keel owners and captains prominent on the Humber, Trent, Ouse and their tributary rivers and canals. He has sailed in keels from early childhood, serving as mate, captain and owner. Over eighty years of age, he has memories of the keels and keelmen of hi s youth, and of the diverse cargos once carried to a multitude of different ports. Most important, perhaps, he has that quality, rare in a practical seaman, of being able to

write with clarity and with wide command of language. He deals in detail with the history of the keels and other local craft through their heyday in the nineteenth century and on to their eclipse in the mid-twentieth century. Fully illustrated with period pictures, photos and useful maps, one cannot overlook the delightful illustrations and plans by Edward Paget-Tomlinson which help to explain the text. Appendices and glossaries covering the technical details of the keels and their work make this an invaluable reference work. JAMES FORSYTHE Major Forsythe is deputy chairman of the World Ship Trust, and president of the Nmfolk Wherry Trust. SS Jeremiah 0 'Brien, Last of the Liberties, (Historic Film Distributors, Burlingame, CA, 1988, 30min, color, $29,95NHS or BETA) To the evocative music of "Sentimental Journey ," this all-too-brief film explores and reports on the restoration and ceremonial steaming of the Liberty ship Jeremiah O'Brien, one survivor of the 2751 such &hips built in the US in the 1940s as a war emergency measure. The O' Brien and her sisters provided the "bridge of ships" that linked the US to the battlefronts of a world at war, and may truly be said to have turned the tides of war in all theaters. The film dwells affectionately on the gleaming restored machinery that drives the big ship across the water of San Francisco Bay these days. As a volunteer engineer remarks, the engines are practically immortal-because they were the simple, massive, triple-expansion type revived for these ships because of its ease of manufacture. There are deficiencies in the narrative, however. We get shots of redcoats as President Roosevelt is heard explaining the proud antecedents of the American flag at sea,

The Titanic display includes a 28', one ton model oft White Star liner...and vureo program on its discouery in the North Atlantic. PLUS ... excitingmemoriesandmodelsofpowerful ste mships and visions ofthe golden age ofthe old Fall River Li On Fall Rivers historic waler{ront..easily reached o Roule 195 by car... or by boot with anchorage available ...the Marine Mu•eum at Fall River is open 9am. to 4:30pm • weekdays, and lOam. to 5pm. weekertd.s and holidays. Call (508) 674-3533 for information.

but no action shots of the Libertys as they pursued their hazardous and vital mission on the Arctic run to Murmansk in the Soviet Union, or to the steaming jungles of remote islands in the South Pacific. This film conveys present-day nostalgia, in a ship of memories manned by veterans, rather than a seeking out of the hard experience the Libertys were built for and finally, at immense cost, triumphed in. For that, we need another PETER STANFORD film. Historic Ships, Michael K. Stammers (Shire Publications, Ltd. , Aylesbury, Eng., 32pp, illus, £1.25pb) After an introduction about ship preservation in general the author gives a brief summary of the development of ships from the earliest log canoes through the early steamers and surviving paddle ships of the nineteenth and early twentieth centuries. The book also includes a review of warships, fishing craft, pleasure boats and harbor service craft. The album closes with a summary of hi storic ships and maritime museums by counties, with details of when and where these may be visited. JAMES FORSYTHE

on Penetanguishene Bay, Lake Huron home of the replica

Ontario Ministry of Tourism and Recreation