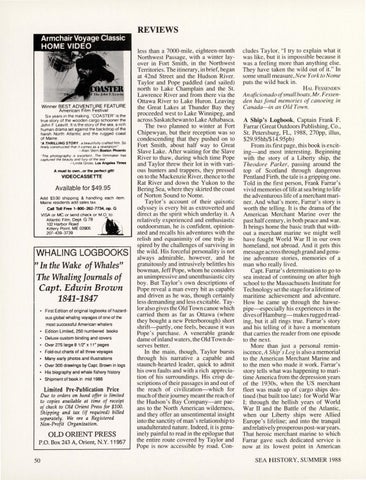 Winner BEST ADVENTURE FEATURE American Film Festival Six years 1n the making , "COASTER" is the true story of the wooden cargo schooner the John F. Leavitt. It is the story of the sea . a rich human drama set against the backdrop of the harsh North Atlantic and the rugged coast of Maine. "A THRILLING STORY...a beaut1lully crafted film . So finely constructed that it comes as a revelation '" - Alan Stern .Bolton Phoenix .. The photography 1s excellent.. The filmmaker has captured the beauty and fury o f the sea ..

A must to own ...or the perlect gift!

"In the Wake of Whales" The Whaling f ournals of Capt. Edwin Brown 1841-1847 First Edition of original logbooks of hazardous global whaling voyages of one of the most successful American whalers Edition Limited, 250 numbered books Deluxe custom binding and covers Over 275 large 8 1/'Z" x 11" pages Fold-out charts of all three voyages

Many early photos and illustrations Over 300 drawings by Capt. Brown in logs His biography and whale fishery history Shipment of book in mid 1988

Limited Pre-Publication Price Due to orders on hand offer is limited to copies available at time of receipt of check to Old Orient Press for $100. Shipping and tax (if required) billed separately. We 'Ire a Registered Non-Profit Organization .

less than a 7000-mile, eighteen-month Northwest Passage, with a winter layover in Fort Smith, in the Northwest Territories. The itinerary, in brief, began at 42nd Street and the Hudson River. Taylor and Pope paddled (and sailed) north to Lake Champlain and the St. Lawrence River and from there via the Ottawa River to Lake Huron. Leaving the Great Lakes at Thunder Bay they proceeded west to Lake Winnipeg, and across Saskatchewan to Lake Athabasca. The two planned to winter at Fort Chipewyan, but their reception was so condescending that they pushed on to Fort Smith, about half way to Great Slave Lake. After waiting for the Slave River to thaw , during which time Pope and Taylor threw their lot in with various hunters and trappers, they pressed on to the Mackenzie River, thence to the Rat River and down the Yukon to the Bering Sea, where they skirted the coast of Norton Sound to Nome. Taylor's account of their quixotic odyssey is every bit as extroverted and direct as the spirit which underlay it. A relatively experienced and enthusiastic outdoorsman, he is confident, opinionated and recalls his adventures with the relish and equanimity of one truly inspired by the challenges of surviving in the wild. His forceful personality is not always admirable, however, and he gratuitously and intrusively belittles his bowman, Jeff Pope, whom he considers an unimpressive and unenthusiastic city boy. But Taylor's own descriptions of Pope reveal a man every bit as capable and driven as he was, though certainly less demanding and less excitable. Taylor also gives the Old Town canoe which carried them as far as Ottawa (where they bought a new Peterborough) short shrift-partly, one feels , because it was Pope's purchase. A venerable grande dame of inland waters, the Old Town deserves better. In the main, though, Taylor bursts through his narrative a capable and staunch-hearted leader, quick to admit his own faults and with a rich appreciation of his surroundings. His crisp descriptions of their passages in and out of the reach of civilization-which for much of their journey meant the reach of the Hudson 's Bay Company-are paeans to the North American wilderness, and they offer an unsentimental insight into the sanctity of man 's relationship to unadulterated nature. Indeed, it is genuinely painful to read in the epilogue that the entire route covered by Taylor and Pope is now accessible by road. Con-

eludes Taylor, "I try to explain what it was like, but it is impossible because it was a feeling more than anything else. They have taken the wild out of it." In some small measure, New York to Nome puts the wild back in. HAL FESSENDEN

An aficionado ofsmall boats, Mr. Fessenden has fond memories of canoeing in Canada-in an Old Town.

A Ship's Logbook, Captain Frank F. Farrar (Great Outdoors Publishing, Co., St. Petersburg, FL, 1988, 270pp, illus, $29.95hb/$ l 4.95pb) From its first page, this book is exciting-and most interesting. Beginning with the story of a Liberty ship, the Theodore Parker~ passing around the top of Scotland through dangerous Pentland Firth, the tale is a gripping one. Told in the first person, Frank Farrar's vivid memories of life at sea bring to life the adventurous life of a merchant mariner. And what's more, Farrar' s story is worth the telling. It is the drama of the American Merchant Marine over the past half century, in both peace and war. It brings home the basic truth that without a merchant marine we might well have fought World War II in our own homeland, not abroad. And it gets this message across through grand and genuine adventure stories, memories of a man who really lived. Capt. Farrar's determination to go to sea instead of continuing on after high school to the Massachusets Institute for Technology set the stage for a lifetime of maritime achievement and adventure. How he came up through the hawsepipe-especially his experiences in the dives of Hamburg-makes rugged reading, but it all rings true. Farrar' s story and his telling of it have a momentum that carries the reader from one episode to the next. More than just a personal reminiscence, A Ship's Log is also a memorial to the American Merchant Marine and to the men who made it work. Farrar's story tells what was happening to maritime America from the depression years of the 1930s, when the US merchant fleet was made up of cargo ships destined (but builttoo late) for World War I; through the helli sh years of World War II and the Battle of the Atlantic, when our Liberty ships were Allied Europe's lifeline; and into the tranquil and relatively prosperous post-war years. That heroic merchant marine to which Farrar gave such dedicated service is now at its lowest point in American SEA HISTORY , SUMMER 1988