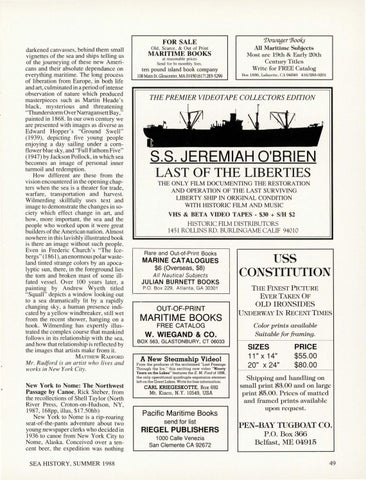 FOR SALE darkened canvasses, behind them small vignettes of the sea and ships telling us of the journeying of these new Americans and their absolute dependance on everything maritime. The long process of liberation from Europe, in both life and art, culminated in a period of intense observation of nature which produced masterpieces such as Martin Heade's black, mysterious and threatening ''Thunderstorm Over Narragansett Bay," painted in 1868. In our own century we are presented with images as diverse as Edward Hopper's "Ground Swell" (1939), depicting five young people enjoying a day sailing under a cornflower blue sky, and "Full Fathom Five" (1947) by Jackson Pollock, in which sea becomes an image of personal inner turmoil and redemption. How different are these from the vision encountered in the opening chapters when the sea is a theater for trade, warfare, transportation and harvest. Wi lmerding ski llfully uses text and image to demonstrate the changes in society which effect change in art, and how, more important, the sea and the people who worked upon it were great bui lders of the American nation. Almost nowhere in this lavishly ill ustrated book is there an image without such people. Even in Frederic Church's "The Icebergs" (1861), an enormous polar wasteland tinted strange colors by an apocalyptic sun, there, in the foregro und lies the tom and broken mast of some illfated vessel. Over 100 years later, a painting by Andrew Wyeth titled "Squall" depicts a window looking out to a sea dramatically lit by a rapidly changing sky, a human presence indicated by a yellow windbreaker, still wet from the recent shower, hanging on a hook. Wi lmerding has expertly illustrated the complex course that mankind follows in its relationship with the sea, and how that relationship is reflected by the images that artists make from it. MATTHEW RADFORD

Mr. Radford is an artist who lives and works in New York City. New Yor k to Nome: T he Nor t hwest Passage by Canoe, Rick Steber, from the recollections of Shell Taylor (North River Press, Croton-on-Hudson, NY, 1987, 168pp, illus, $17.SOhb) New York to Nome is a rip-roaring seat-of-the-pants adventure about two young newspaper clerks who decided in 1936 to canoe from New York City to Nome, Alaska. Conceived over a tencent beer, the expedition was nothing SEA HISTORY, SUMMER 1988

Old, Scarce, & Out of Print

S.S. JEREMIAH O'BRIEN LAST OF THE LIBERTIES THE ONLY FILM DOCUMENTING THE RESTORATION AND OPERATION OF THE LAST SURVIVING LIBERTY SHIP IN ORIGINAL CONDITION WITH HISTORIC FILM AND MUSIC

A New Steamship Video! From the producer of the acclaimed "Last Passage Through the Ice." this exciting new video " Ninety Years on the Lakes" features the E. M. Ford of 1898, the on ly operational quadruple expansion s teamer

left on the Great Lakes. Write for free information.

Shipping and handling on small print $3.00 and on large print $5.00. Prices of matted and framed prints available upon request.