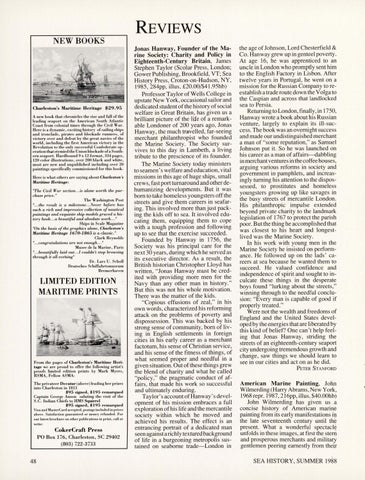 Charleston's Maritime Heritage $29.95 A new book that chronicles the rise and fall of the leading sea port on the American South Atlantic Coast from colonial times through the Civil War. Here is a dynamic, exciting history of sailing ships and ironclads, pirates and blockade runner s of victory over and d efeat by the great navies of 'the world, including the first American victory in th e Revolution to the only successful Confederate operation that stymied the U nion blockade of a Southern seapo~l. Har~ound 9 x 12 format, 334 pages, 120 color illustrat1ons, over 200 black and white, most are new a nd unpublished including over 20 pamtmgs specifically commissioned for this book. Here is what other s are saying about Charle&ton'1 Maritinw Heritage:

"The Civil War section .. . is al-One worth the purchase price." The Washington Post "... the result is a milestone ... Never before has such a rich and impressive collection of nautical paintings and exquisite ship models graced a history book ... a beautiful and absolute work ... " Ships in Scale Magazine "On the basis of the graphics akme, Charleston's Maritinw Heritage 1670-1865 is a c/.assic. " " . Clark Reynolds .. . congratulatwns are not enough ... " Musee de la Marine, Paris "... beautifully /.aid out ... 1 couldn't stop browsing through it all evehing" Dr. Lars U. Scholl Deutsches Sch.iffa hrtsmuse um Bremerhaven

Jonas Hanway, Founder of the Marine Society: Charity and Policy in Eighteenth-Century Britain, James Stephen Taylor (Scolar Press, London; Gower Publishing, Brookfield, VT; Sea History Press, Croton-on-Hudson, NY, 1985, 284pp, illus, ÂŁ20.00/$4 l .95hb) Professor Taylor of Wells College in upstate New York, occasional sailor and dedicated student of the history of social welfare in Great Britain, has given us a brilliant picture of the life of a remarkable Londoner of 200 years ago, Jonas Hanway , the much travelled, far-seeing merchant philanthropist who founded the Marine Society. The Society survives to this day in Lambeth, a living tribute to the prescience of its founder. The Marine Society today ministers to seamen 's welfare and education, vital missions in this age of huge ships, small crews, fast port turnaround and other dehumanizing developments. But it was born to take homeless youngsters off the streets and give them careers in seafaring. This involved more than just packing the kids off to sea. It involved educating them, equipping them to cope with a tough profession and following up to see that the exercise succeeded. Founded by Hanway in 1756, the Society was his principal care for the next 30 years, during which he served as its executive director. As a result, the British historian Christopher Lloyd has written, "Jonas Hanway must be credited with providing more men for the Navy than any other man in history ." But this was not hi s whole motivation . There was the matter of the kids. "Copious effusions of zeal ," in his own words, characterized his reforming attack on the problems of poverty and dispossession. This was backed by his strong sense of community, born of living in English settlements in foreign cities in his early career as a merchant factotum, his sense of Christian service, and his sense of the fitness of things, of what seemed proper and needful in a given situation. Out of these things grew the blend of charity and what he called "policy," the pragmatic conduct of affairs , that made his work so successful and ultimately enduring. Taylor's accountofHanway 's development of his mission embraces a full exploration of his life and the mercantile society within which he moved and achieved his results. The effect is an entrancing portrait of a dedicated man seen against a richly textured background of life in a burgeoning metropolis sustained on seaborne trade-London in

the age of Johnson, Lord Chesterfield & Co. Hanway grew up in genteel poverty. At age 16, he was apprenticed to an uncle in London who promptly sent him to the English Factory in Lisbon. After twelve years in Portugal, he went on a mission for the Russian Company to reestablish a trade route down the Volga to the Caspian and across that landlocked sea to Persia. Returning to London, finally, in 17 50, Hanway wrote a book about his Russian venture, largely to explain its ill-success. The book was an overnight success and made our undistinguished merchant a man of "some reputation," as Samuel Johnson put it. So he was launched on his career as a man of affairs-dabbling in merchant ventures in the coffee houses, arguing various reforms in society and government in pamphlets, and increasingly turning his attention to the dispossessed, to prostitutes and homeless youngsters growing up like savages in the busy streets of mercantile London. His philanthropic impulse extended beyond private charity to the landmark legislation of 1767 to protect the parish poor. But the thing he accomplished that was closest to hi s heart and longestlived was the Marine Society. In his work with young men in the Marine Society he insisted on performance. He followed up on the lads' careers at sea because he wanted them to succeed. He valued confidence and independence of spirit and sought to inculcate these things in the desperate boys found "lurking about the streets," winning through to the needful conclusion: "Every man is capable of good if properly treated." Were not the wealth and freedoms of England and the United States developed by the energies that are liberated by this kind of belief? One can't help feeling that Jonas Hanway, striding the streets of an eighteenth-century seaport city undergoing tremendous growth and change, saw things we should learn to see in our cities and act on as he did. P ETER STA NFORD

American Marine Painting, Jolin Wilmerding (Harry Abrams, New York, 1968 repr. 1987, 216pp, illus, $40.00hbJ John Wilmerding has given us . a concise history of American marine painting from its early manifestations in the late seventeenth century until th~ present. . What a wonderful spectacl~ unfolds m these images, at first the stem and prosperous .merchants and milita~y gentlemen peenng earnestly from their SEA HISTORY, SUMMER 19S8