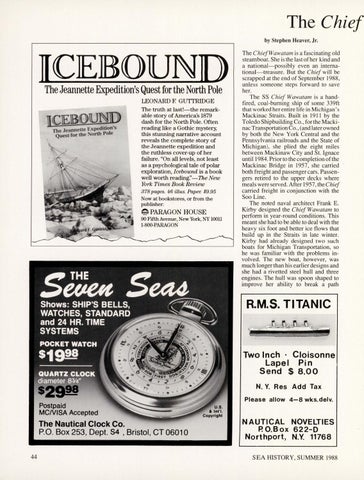 The Chief by Stephen Heaver, Jr.

ICEBOUND The Jeannette Expedition's Quest for the North Pole

LEONARD F. GUTTRIDGE The truth at last!-the remarkable story of America's 1879 dash for the North Pole. Often reading like a Gothic mystery, this stunning narrative account reveals the complete story of the Jeannette expedition and the ruthless cover-up of her failure. "On all levels, not least as a psychological tale of polar exploration, Icebound is a book well worth reading:'-TheNew Turk Times Book Review 378 pages. 46 illus. Paper. $9. 95 Now at bookstores, or from the publisher:

The Chief Wawatam is a fascinating old steamboat. She is the last of her kind and a national-possi bly even an international-treasure. But the Chief will be scrapped at the end of September 1988, unless someone steps forward to save her. The SS Chief Wawatam is a handfired, coal-burning ship of some 339ft that worked her entire life in Michigan 's Mackinac Straits. Built in 1911 by the Toledo Shipbuilding Co., for the Mackinac Transportation Co., (and laterowned by both the New York Central and the Pennsylvania railroads and the State of Michigan), she plied the eight miles between Mackinaw City and St. Ignace until 1984. Prior to the completion of the Mackinac Bridge in 1957, she carried both freight and passenger cars. Passengers retired to the upper decks where meals were served. After 1957, the Chief carried freight in conjunction with the Soo Line. The noted naval architect Frank E. Kirby designed the Chief Wawatam to perform in year-round conditions. This meant she had to be able to deal with the heavy six foot and better ice flows that build up in the Straits in late winter. Kirby had already designed two such boats for Michigan Transportation , so he was familiar with the problems involved. The new boat, however, was m uch longer than his earlier designs and she had a rivetted steel hull and three engines. The hull was spoon shaped to improve her ability to break a path