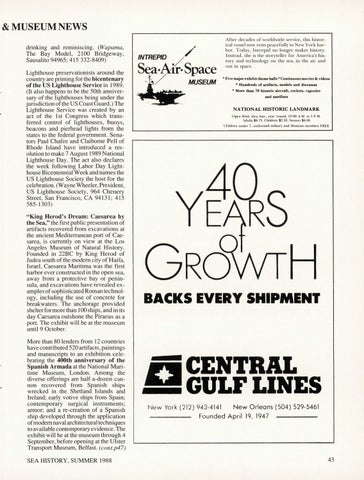 & MUSEUM NEWS drinking and remm1scmg. (Wapama, The Bay Model, 2100 Bridgeway, Sausalito 94965; 415 332-8409) Lighthouse preservationists around the country are priming for the bicentenary of the US Lighthouse Service in 1989. (It also happens to be the 50th anniversary of the lighthouses being under the jurisdiction of the US Coast Guard.) The Lighthouse Service was created by an act of the 1st Congress which transferred control of lighthouses, buoys, beacons and pierhead lights from the states to the federal government. Senators Paul Chafee and Claiborne Pell of Rhode Island have introduced a resolution to make 7 August 1989 National Lighthouse Day. The act also declares the week following Labor Day Lighthouse Bicentennial Week and names the US Lighthouse Society the host for the celebration. (Wayne Wheeler, President, US Lighthouse Society, 964 Chenery Street, San Francisco, CA 94131; 415 585-1303) "King Herod's Dream: Caesarea by the Sea," the first public presentation of artifacts recovered from excavations at the ancient Mediterranean port of Caesarea, is currently on view at the Los Angeles Museum of Natural History. Founded in 22BC by King Herod of Judea south of the modem city of Haifa, Israel, Caesarea Maritima was the first harbor ever constructed in the open sea, away from a protective bay or peninsula, and excavations have revealed examples of sophisticated Roman technology, including the use of concrete for breakwaters. The anchorage provided shelter for more than lOOships, and in its day Caesarea outshone the Piraeus as a port. The exhibit will be at the museum until 9 October. More than 80 lenders from 12 countries have contributed 520 artifacts, paintings and manuscripts to an exhibition celebrating the 400th anniversary of the Spanish Armada at the National Maritime Museum, London. Among the diverse offerings are half-a-dozen cannon recovered from Spanish ships wrecked in the Shetland Islands and Ireland; early votive ships from Spain; contemporary surgical instruments; armor; and a re-creation of a Spanish ship developed through the application of modern naval architectural techniques to available contemporary evidence. The exhibit will be at the museum through 4 September, before opening at the Ulster Transport Museum, Belfast. (cont.p47) SEA HISTORY, SUMMER 1988

After decades of worldwide service, this historical vessel now rests peacefully in New York harbor. Today, Intrepid no lon ger makes history. Instead , she is the storyteller for America 's history and technology on the sea, in the air and out in space. •Five major exhibit theme halls• Continuous movies&: videos • Hundreds of artifacts, models and dioramas • More than 70 historic aircraft, rockets, capsules and satellites