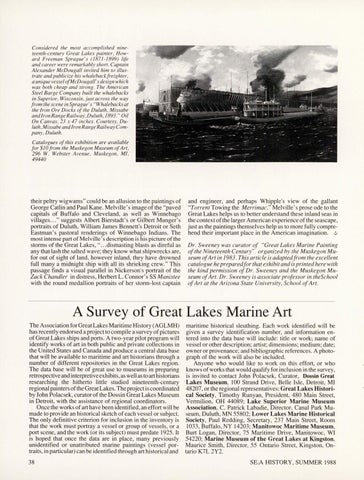 Considered the most accomplished nineteenth-century Great Lakes painter, Howard Freeman Sprague&#39; s (1871-1899) life and career were remarkably short. Captain Alexander McDougall invited him to illustrate and publicize his whalebackfreighter, a unique vessel ofMcDougal/&#39; s design which was both cheap and strong. The American Steel Barge Company built the whalebacks in Superior, Wisconsin, just across the way from the scene in Sprague&#39; s &quot;Whalebacks at the iron Ore Docks of the Duluth, Missabe and lron Range Railway,Duluth , 1893 .&quot; Oil On Canvas, 23 x 47 inches. Courtesy, Duluth, Missabe and iron Range Railway Company, Duluth. Catalogues of this exhibition are available for $10 from the Muskegon Museum of Art, 296 W. Webster Avenue, Muskegon , Ml, 49440

their peltry wigwams&quot; could be an allusion to the paintings of George Catlin and Paul Kane. Melville &#39;s image of the &quot;paved capitals of Buffalo and Cleveland, as well as Winnebago villages ... &quot; suggests Albert Bierstadt &#39;s or Gilbert Munger&#39;s portraits of Duluth, William James Bennett&#39;s Detroit or Seth Eastman&#39;s pastoral renderings of Winnebago Indians. The most intense part of Melville&#39;s description is his picture of the storms of the Great Lakes , &quot; ... dismasting blasts as direful as any that lash the salted wave; they know what shipwrecks are, for out of sight of land, however inland, they have drowned full many a midnight ship with all its shrieking crew.&quot; This passage find s a visual parallel in Nickerson&#39;s portrait of the Zack Chandler in di stress, Herbert L. Connor&#39;s SS Manistee with the round medallion portraits of her storm-lost captain

and engineer, and perhaps Whipple&#39;s view of the gallant &quot;Torrent Towing the Merrimac.&quot; Melville &#39;s prose ode to the Great Lakes helps us to better understand these inland seas in the context of the larger American experience of the seascape, just as the paintings themselves help us to more fully comprehend their important place in the American imagination. -1&#39; Dr. Sweeney was curator of &quot;Great Lakes Marine Painting of the Nineteenth Century&quot; organized by the Muskegon Museum ofArt in 1983 . This article is adapted from the excellent catalogue he prepared for that exhibit and is printed here with the kind permission of Dr. Sweeney and the Muskegon Museum of Art. Dr. Sweeney is associate professor in theSchool of Art at the Arizona State University, School of Art.

A Survey of Great Lakes Marine Art The Association forGreat Lakes Maritime History (AGLMH) maritime historical sleuthing. Each work identified will be has recently endorsed a project to compile a survey of pictures given a survey identification number, and information enof Great Lakes ships and ports. A two-year pilot program will tered into the data base will include: title or work; name of identify works of art in both public and private collections in vessel or other description; artist; dimensions; medium; date; the United States and Canada and produce a central data base owner or provenance; and bibliographic references. A photothat will be available to maritime and art historians through a graph of the work will also be included. number of different repositories in the Great Lakes region. Anyone who would like to work on this effort, or who The data base will be of great use to museums in preparing knows of works that would qualify for inclusion in the survey, retrospective and interpretive exhibits, as well as to art historians is invited to contact John Polacsek, Curator, Dossin Great researching the hitherto little studied nineteenth-century Lakes Museum, 100 Strand Drive, Belle Isle, Detroit, MI regional painters of the Great Lakes. The project is coordinated 48207, or the regional representatives: Great Lakes Historiby John Polacsek, curator of the Doss in Great Lakes Museum cal Society, Timothy Runyan, President, 480 Main Street, in Detroit, with the assistance of regional coordinators. Vermilion, OH 44089; Lake Superior Marine Museum Once the works of art have been identified, an effort will be Association, C. Patrick Labadie, Director, Canal Park Mumade to provide an historical sketch of each vessel or subject. seum, Duluth, MN 55802; Lower Lakes Marine Historical The only definitive criterion for inclusion in the inventory is Society, Paul Redding, Secretary, 237 Main Street, Room that the work must portray a vessel or group of vessels, or a 1033, Buffalo, NY 14203; Manitowoc Maritime Museum, port scene, and the work (or its subject) must predate 1925. It Burt Logan, Director, 75 Maritime Drive, Manitowoc, WI is hoped that once the data are in place, many previously 54220; Marine Museum of the Great Lakes at Kingston, unidentified or unattributed marine paintings (vessel por- Maurice Smith, Director, 55 Ontario Street, Kingston, Ontraits, in particular) can be identified through art historical and tario K7L 2Y2. 38