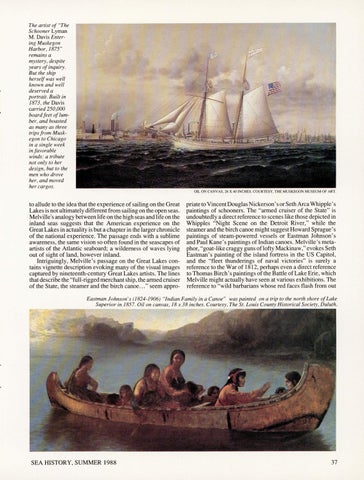 The artist of "The Schooner Lyman M. Davis Entering Muskegon Harbor , 1875" remains a mystery, despite years of inquiry. But the ship herself was well known and well deserved a portrait. Built in 1873, the Davis carried 250,000 board fe et of lumber, and boasted as many as three trips from Muskegon to Chicago in a single week in favorable winds: a tribute not only to her design , but to the men who drove her, and moved her cargos. OIL ON CANVAS, 26 X 40 INCHES. COURTESY, THE MU SKEGON MUSEUM OF ART.

to allude to the idea that the experience of sailing on the Great Lakes is not ultimately different from sailing on the open seas. Melville's analogy between life on the high seas and life on the inland seas suggests that the American experience on the Great Lakes in actuality is but a chapter in the larger chronicle of the national experience. The passage ends with a sublime awareness, the same vision so often found in the seascapes of artists of the Atlantic seaboard; a wilderness of waves lying out of sight of land, however inland. Intriguingly, Melville's passage on the Great Lakes contains vignette description evoking many of the visual images captured by nineteenth-century Great Lakes artists. The lines that describe the "full-rigged merchant ship, the armed cruiser of the State, the steamer and the birch canoe ... " seem appro-

priate to Vincent Douglas Nickerson' s or Seth Arca Whipple 's paintings of schooners. The "armed cruiser of the State" is undoubted! y a direct reference to scenes like those depicted in Whipples "Night Scene on the Detroit River," while the steamer and the birch canoe might suggest Howard Sprague' s paintings of steam-powered vessels or Eastman Johnson's and Paul Kane 's paintings of Indian canoes. Melville 's metaphor, "goat-like craggy guns oflofty Mackinaw ," evokes Seth Eastman 's painting of the island fortress in the US Capitol, and the "fleet thunderings of naval victories" is surely a reference to the War of 1812, perhaps even a direct reference to Thomas Birch's paintings of the Battle of Lake Erie, which Melville might actually have seen at various exhibitions. The reference to "wild barbarians whose red faces flash from out