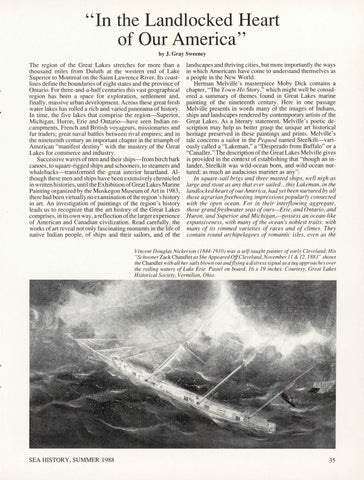 ''In the Landlocked Heart of Our America'' by J. Gray Sweeney

The region of the Great Lakes stretches for more than a landscapes and thriving cities, but more importantly the ways thousand miles from Duluth at the western end of Lake in which Americans have come to understand themselves as Superior to Montreal on the Saint Lawrence River. Its coast- a people in the New World. Herman Melville 's masterpiece Moby Dick contains a lines define the boundaries of eight states and the province of Ontario. For three-and-a-half centuries this vast geographical chapter, "The Town-Ho Story," which might well be considregion has been a space for exploration, settlement and, ered a summary of themes found in Great Lakes marine finally, massive urban development. Across these great fresh painting of the nineteenth century. Here in one passage water lakes has rolled a rich and varied panorama of history. Melville presents in words many of the images of Indians, In time, the five lakes that comprise the region-Superior, ships and landscapes rendered by contemporary artists of the Michigan, Huron, Erie and Ontario-have seen Indian en- Great Lakes. As a literary statement, Melville's poetic decampments, French and British voyageurs, missionaries and scription may help us better grasp the unique art historical fur traders; great naval battles between rival empires; and in heritage preserved in these paintings and prints. Melville 's the nineteenth century an important chapter in the triumph of tale concerns a sailor in the Pequod named Steelkilt-variAmerican "manifest destiny" with the mastery of the Great ously called a "Lakeman," a "Desperado from Buffalo" or a "Canaller." The description of the Great Lakes Melville gives Lakes for commerce and industry. Successive waves of men and their ships-from birch bark is provided in the context of establishing that "though an incanoes, to square-rigged ships and schooners, to steamers and lander, Steelkilt was wild-ocean born, and wild-ocean nurwhalebacks-transformed the great interior heartland. Al- tured; as much an audacious mariner as any": In square-sail brigs and three masted ships, well nigh as though these men and ships have been extensively chronicled in written histories, until the Exhibition of Great Lakes Marine large and stout as any that ever sailed . . .this Lakeman, in the Painting organized by the Muskegon Museum of Art in 1983, landlocked heart ofour America, had yet been nurtured by all there had been virtually no examination of the region's history those agrarianfreebooting impressions popularly connected in art. An investigation of paintings of the region's history with the open ocean. For in their interflowing aggregate, leads us to recognize that the art history of the Great Lakes those grand freshwater seas of ours-Erie, and Ontario, and comprises, in its own way, a reflection of the larger experience Huron , and Superior and Michigan,--possess an ocean-like of American and Canadian civilization. Read carefully, the expansiveness, with many of the ocean's noblest traits; with works of art reveal not only fascinating moments in the life of many of its rimmed varieties of races and of climes. They native Indian people, of ships and their sailors, and of the contain round archipelagoes of romantic isles, even as the Vincent Douglas Nickerson (1844-1910) was a self-taught painter of early Cleveland. His "Schooner Zack Chandler as She Appeared Off Cleveland, November 11 & 12 , 1883" shows the Chandler with all her sails blown out and flying a distress signal as a tug approaches over the roiling waters of Lake Erie. Pastel on board, 16 x 19 inches. Courtesy, Great Lakes Historical Society, Vermilion , Ohio.