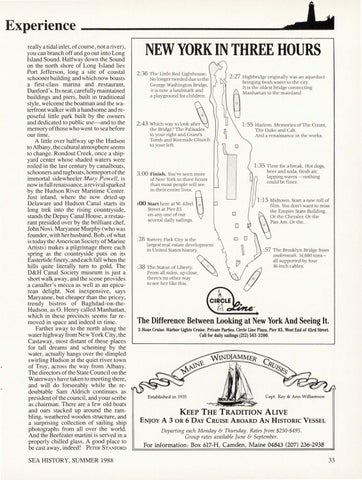 really a tidal inlet, of course, not a river), you can branch off and go out into Long Island Sound. Halfway down the Sound on the north shore of Long Island lies Port Jefferson, long a site of coastal schooner building and which now boasts a first-class marina and restaurant, Danford &#39;s. Its neat, carefully maintained buildings and piers, built in traditional style, welcome the boatman and the waterfront walker with a handsome and reposeful little park built by the owners and dedicated to public use-and to the memory of those who went to sea before our time. A little over halfway up the Hudson to Albany, the cultural atmosphere seems to change. Rondout Creek, once a shipyard center whose shaded waters were roiled in the last century by canalboats, schooners and tugboats, homeportofthe immortal sidewheeler Mary Powell, is now in full renaissance, a rev ival sparked by the Hudson River Maritime Center. Just inland, where the now dried-up Delaware and Hudson Canal starts its long trek into the rising countryside, stands the Depuy Canal House, a restaurant presided over by the brilliant chef, John Novi. Maryanne Murphy (who was founder, with her husband, Bob, of what is today the American Society of Marine Arti sts) makes a pilgrimage there each spring as the countryside puts on its Eastertide finery, and each fall when the hills quite literally tum to gold. The D&amp;H Canal Society museum is just a short walk away, and the scene provides a canaller&#39;s mecca as well as an epicurean delight. Not inexpensive, says Maryanne, but cheaper than the pricey, trendy bi stros of Baghdad-on-theHudson, as 0. Henry called Manhattan, which in these precincts seems far removed in space and indeed in time. Farther away to the north along the water highway from New York City, the Castaway, most distant of these places for tall dreams and scheming by the water, actually hangs over the dimpled swirling Hudson at the quiet river town of Troy , across the way from Albany. The directors of the State Council on the Waterways have taken to meeting there, and will do forseeably while the redoubtable Sam Aldrich continues as president of the council, and your scribe as chairman. There are a few old boats and oars stacked up around the rambling, weathered wooden structure, and a surprising collection of sailing ship photographs from all over the world. And the Beefeater martini is served in a properly chilled glass. A good place to be cast away, indeed! PETER STANFORD SEA HISTORY, SUMMER 1988

NEW YORK IN THREE HOURS 2:36 The Little Red Lighthouse. No longer needed du e to the George Washingto n Bridge, it is now a landm ark and a playground for children.

2:27 Highbridge originally was an aqu educt

bringing fresh water to the city. It is the oldest bridge connecting Manhatta n to th e mainla nd .

the Bridge? The Palisades to your right an d Grant&#39;s Tomb a nd Riverside Church to your le ft.

From all sides, up close, there&#39;s no other way to see her like this.

KEEP THE TRADITION ALIVE ENJOY A

3 OR 6 DAY CRUISE ABOARD AN HISTORIC VESSEL