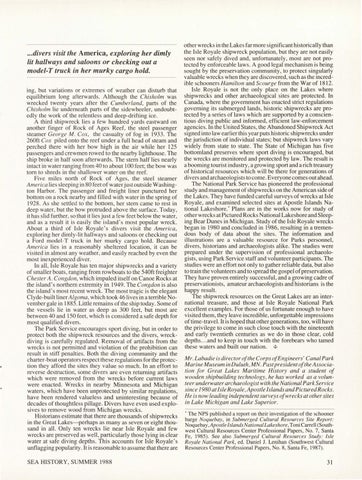 ... divers visit the America, exploring her dimly lit hallways and saloons or checking out a model-T truck in her murky cargo hold. ing, but variations or extremes of weather can disturb that equilibrium long afterwards. Although the Chisholm was wrecked twenty years after the Cumberland, parts of the Chisholm lie underneath parts of the sidewheeler, undoubtedly the work of the relentless and deep-drifting ice. A third shipwreck lies a few hundred yards eastward on another finger of Rock of Ages Reef, the steel passenger steamer George M. Cox, the casualty of fog in 1933. The 260ft Cox piled onto the reef under a full head of steam and perched there with her bow high in the air while her 125 passengers and crewmen rowed to the nearby lighthouse. The ship broke in half soon afterwards. The stem half lies nearly intact in water ranging from 40 to about 100 feet; the bow was tom to shreds in the shallower water on the reef. Five miles north of Rock of Ages, the steel steamer America lies sleeping in 80 feet of water just outside Washington Harbor. The passenger and freight liner punctured her bottom on a rock nearby and filled with water in the spring of 1928. As she settled to the bottom, her stem came to rest in deep water, but the bow protruded above the surface. Today, it has slid further, so that it lies just a few feet below the water, and as a result it is easily the island&#39;s most popular wreck. About a third of Isle Royale&#39;s divers visit the America, exploring her dimly-lit hallways and saloons or checking out a Ford model -T truck in her murky cargo hold. Because America lies in a reasonably sheltered location, it can be visited in almost any weather, and easily reached by even the most inexperienced diver. In all, Isle Royale has ten major shipwrecks and a variety of smaller boats, ranging from rowboats to the 540ft freighter Chester A. Congdon, which impaled itself on Canoe Rocks at the island &#39;s northern extremity in 1949. The Congdon is also the island &#39;s most recent wreck. The most tragic is the elegant Clyde-built liner Algoma, which took 46 lives in a terrible November gale in 1885. Little remains of the ship today. Some of the vessels lie in water as deep as 300 feet, but most are between 40 and 150 feet, which is considered a safe depth for most qualified divers. The Park Service encourages sport diving, but in order to protect both the shipwreck resources and the divers, wreckdiving is carefully regulated. Removal of artifacts from the wrecks is not permitted and violation of the prohibition can result in stiff penalties. Both the diving community and the charter-boat operators respect these regulations for the protection they afford the sites they value so much. In an effort to reverse destruction, some divers are even returning artifacts which were removed from the wrecks before current laws were enacted. Wrecks in nearby Minnesota and Michigan waters, which have been unprotected by similar regulations, have been rendered valueless and uninteresting because of decades of thoughtless pillage. Divers have even used explosives to remove wood from Michigan wrecks. Historians estimate that there are thousands of shipwrecks in the Great Lakes-perhaps as many as seven or eight thousand in all. Only ten wrecks lie near Isle Royale and few wrecks are preserved as well, particularly those lying in clear water at safe diving depths. This accounts for Isle Royale &#39;s unflagging popularity. It is reasonable to assume that there are SEA HISTORY, SUMMER 1988

other wrecks in the Lakes far more significant historically than the Isle Royale shipwreck population, but they are not easily seen nor safely dived and, unfortunately, most are not protected by enforceable laws. A good legal mechanism is being sought by the preservation community, to protect singularly valuable wrecks when they are discovered, such as the incredible schooners Hamilton and Scourge from the War of 1812. Isle Royale is not the only place on the Lakes where shipwrecks and other archaeological sites are protected. In Canada, where the government has enacted strict regulations governing its submerged lands, historic shipwrecks are protected by a series of laws which are supported by a conscientious diving public and informed, efficient law-enforcement agencies. In the United States, the Abandoned Shipwreck Act signed into law earlier this year puts historic shipwrecks under the jurisdiction of individual states; but shipwreck laws vary widely from state to state. The State of Michigan has five bottomland preserves where sport diving is encouraged, but the wrecks are monitored and protected by law. The result is a booming tourist industry, a growing sport and a rich treasury of historical resources which will be there for generations of divers and archaeologists to come. Everyone comes out ahead. The National Park Service has pioneered the professional study and management of shipwrecks on the American side of the Lakes. They have funded careful surveys of wrecks at Isle Royale, and examined selected sites at Apostle Islands National Lakeshore.* Plans are in the works now for study of other wrecks at Pictured Rocks National Lakeshore and Sleeping Bear Dunes in Michigan. Study of the Isle Royale wrecks began in 1980 and concluded in 1986, resulting in a tremendous body of data about the sites. The information and illustrations are a valuable resource for Parks personnel, divers, historians and archaeologists alike. The studies were prepared under the supervision of professional archaeologists, using Park Service staff and volunteer participants. The studies were an effort not only to gather reliable data, but also to train the volunteers and to spread the gospel of preservation. They have proven entirely successful, and a growing cadre of preservationists, amateur archaeologists and historians is the happy result. The shipwreck resources on the Great Lakes are an international treasure, and those at Isle Royale National Park excellent examples. For those of us fortunate enough to have visited them, they leave incredible, unforgettable impressions of time-travel. It is hoped that other generations, too, will have the privilege to come in such close touch with the nineteenth and early twentieth centuries as we do in those clear, cold depths ... and to keep in touch with the forebears who tamed these waters and built our nation. .t Mr. Labadie is director ofthe Corps ofEngineers&#39; Canal Park Marine Museum in Duluth, MN. Past president ofthe Association for Great Lakes Maritime History and a student of wooden shipbuilding technology, he has worked as a volunteer underwater archaeologist with the National Park Service since 1980 at Isle Royale, Apostle Islands and Pictured Rocks. He is now leading independent surveys of wrecks at other sites in Lake Michigan and Lake Superior. &#39; The NPS published a report on their investigation of the schooner barge Noquebay, in Submerged Cultural Resources Site Report: N oquebay, Apostle Islands National Lakes ho re, Toni Carrell (Southwest Cultural Resources Center Professional Papers, No. 7, Santa Fe, 1985). See also Submerged Cultural Resources Study: Isle Royale National Park, ed. Daniel J. Lenihan (Southwest Cultural Resources Center Professional Papers, No. 8, Santa Fe, 1987).