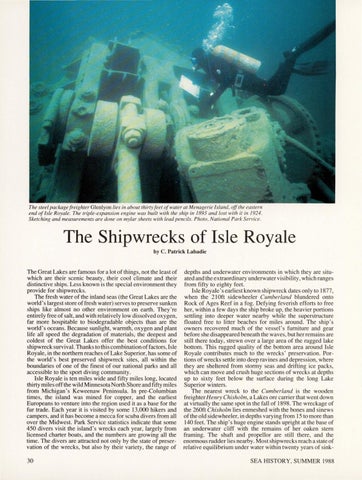 The steel package freighter Glen Iyon lies in about thirty feet of water at Menagerie Island, off the eastern end of Isle Royale. The triple-expansion engine was built with the ship in 1893 and lost with it in 1924. Sketching and measurements are done on mylar sheets with lead pencils. Photo, National Park Service.

The Shipwrecks of Isle Royale by C. Patrick Labadie

The Great Lakes are famous for a lot of things, not the least of which are their scenic beauty, their cool climate and their distinctive ships. Less known is the special environment they provide for shipwrecks. The fresh water of the inland seas (the Great Lakes are the world's largest store of fresh water) serves to preserve sunken ships like almost no other environment on earth. They ' re entirely free of salt, and with relatively low dissolved oxygen, far more hospitable to biodegradable objects than are the world's oceans. Because sunlight, warmth, oxygen and plant life all speed the degradation of materials, the deepest and coldest of the Great Lakes offer the best conditions for shipwreck survival. Thanks to this combination of factors, Isle Royale, in the northern reaches of Lake Superior, has some of the world's best preserved shjpwreck sites, all within the boundaries of one of the finest of our national parks and all accessible to the sport diving community. Isle Royale is ten miles wide and fifty miles long, located thirty miles off the wild Minnesota North Shore and fifty miles from Michigan's Keweenaw Penjnsula. In pre-Columbian times, the island was mined for copper, and the earliest Europeans to venture into the region used it as a base for the fur trade. Each year it is visited by some 13,000 hikers and campers, and it has become a mecca for scuba divers from all over the Midwest. Park Service statistics indicate that some 450 divers visit the island's wrecks each year, largely from licensed charter boats, and the numbers are growing all the time. The divers are attracted not only by the state of preservation of the wrecks, but also by their variety, the range of

depths and underwater environments in which they are situated and the extraordinary underwater visibility, which ranges from fifty to eighty feet. Isle Roy ale's earliest known shipwreck dates only to 1877, when the 210ft sidewheeler Cumberland blundered onto Rock of Ages Reef in a fog. Defying feverish efforts to free her, within a few days the ship broke up, the heavier portions settling into deeper water nearby while the superstructure floated free to litter beaches for miles around. The ship 's owners recovered much of the vessel's furniture and gear before she disappeared beneath the waves, but her remains are still there today, strewn over a large area of the rugged lake bottom. This rugged quality of the bottom area around Isle Royale contributes much to the wrecks' preservation. Portions of wrecks settle into deep ravines and depression, where they are sheltered from stormy seas and drifting ice packs, which can move and crush huge sections of wrecks at depths up to sixty feet below the surface during the long Lake Superior winters. The nearest wreck to the Cumberland is the wooden freighter Henry Chisholm, a Lakes ore carrier that went down at virtually the same spot in the fall of 1898. The wreckage of the 260ft Chisholm lies enmeshed with the bones and sinews of the old sidewheeler, in depths varying from 15 to more than 140 feet. The ship 's huge engine stands upright at the base of an underwater cliff with the remains of her oaken stem framing. The shaft and propellor are still there, and the enormous rudder lies nearby. Most shipwrecks reach a state of relative equilibrium under water within twenty years of sinkSEA HISTORY, SUMMER 1988