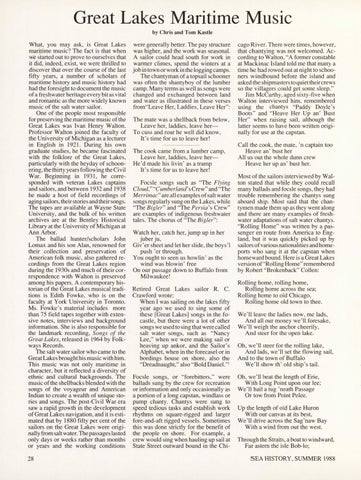 What, you may ask, is Great Lakes maritime music? The fact is that when we started out to prove to ourselves that it did, indeed, exist, we were thrilled to discover that over the course of the last fifty years , a number of scholars of maritime history and music history had had the foresight to document the music of a fr~l!.water heritage every bit as vital and romantic as the more widely known music of the salt water sailor. One of the people most responsible for preserving the maritime music of the Great Lakes was Ivan Henry Walton. Professor Wal ton joined the faculty of the University of Michigan as a lecturer in English in 1921. During his own graduate studies, he became fascinated with the folklore of the Great Lakes, particularly with the heyday of schoonering, the thirty years following the Civil War. Beginning in 1931 , he corresponded with veteran Lakes captains and sailors, and between 1932 and 1938 he made a host of field recordings of aging sailors, their stories and their songs. The tapes are available at Wayne State University, and the bulk of his written archives are at the Bentley Historical Library at the University of Michigan at Ann Arbor. The ballad hunter/scholars John Lomax and his son Alan, renowned for their collection and preservation of American folk music, also gathered recordings from the Great Lakes region during the 1930s and much of their correspondence with Walton is preserved among his papers. A contemporary historian of the Great Lakes musical traditions is Edith Fowke, who is on the faculty at York University in Toronto. Ms. Fowke's material includes more than 75 field tapes together with extensive notes, interviews and background information. She is also responsible for the landmark recording, Songs of the Great Lakes, released in 1964 by Folkways Records. The salt water sailor who came to the Great Lakes brought his music with him. This music was not only maritime in character, but it reflected a diversity of ethnic and cultural backgrounds. The music of the shell backs blended with the songs of the voyageur and American Indian to create a wealth of unique stories and songs. The post-Civil War era saw a rapid growth in the development of Great Lakes navigation, and it is estimated that by 1880 fifty per cent of the sailors on the Great Lakes were originally from salt water. The passages lasted only days or weeks rather than months or years and the working conditions 28

were generally better. The pay structure was higher, and the work was seasonal. A sailor could head south for work in warmer climes, spend the winters at a job in town or work in the logging camps. The chantyman of a topsail schooner was often the shantyboy of the lumber camp. Many terms as well as songs were changed and exchanged between land and water as illustrated in these verses from"Leave Her, Laddies, Leave Her": The mate was a shellback from below, Leave her, laddies, leave herTo cuss and roar he well did know, It's time for us to leave her! The cook came from a lumber camp, Leave her, laddies, leave herHe 'd made his livin' as a tramp It 's time for us to leave her! Focsle songs such as "The Flying Cloud,""Cumberland'sCrew"and"The Merrimac" are all examples of salt water songs regularly sung on the Lakes, while "The Bigler" and "The Persia's Crew" are examples of indigenous freshwater tales. The chorus of "The Bigler": Watch her, catch her, jump up in her juber ju, Giv 'er sheet and let her slide, the boys 'l push 'er through. You ought to seen us howl in ' as the wind was blowin' free On our passage down to Buffalo from Milwaukee! Retired Great Lakes sailor R. C. Crawford wrote: When I was sailing on the lakes fifty year ago we used to sing some of these [Great Lakes] songs in the focastle, but there were a lot of other songs we used to sing that were called salt water songs, such as "Nancy Lee," when we were making sail or heaving up ankor, and the Sailor's Alphabet, when in the forecasel or in bordings house on shore, also the "Dreadnaught," also "Bold Daniel. "1 Focsle songs, or "forebitters," were ballads sung by the crew for recreation or information and only occasionally as a portion of a long capstan, windlass or pump chanty. Chantys were sung to speed tedious tasks and establish work rhythms on square-rigged and larger fore-and-aft rigged vessels. Sometimes this was done strictly for the benefit of the people on shore. For example, a crew would sing when hauling up sail at State Street outward bound in the Chi-

cago River. There were times, however, that chantying was not welcomed. According to Wal ton, "A former constable at Mackinac Island told me that many a time he had rowed out at night to schooners windbound before the island and asked the shipmasters to quiet their crews so the villagers could get some sleep." Jim McCarthy, aged sixty-five when Walton interviewed him, remembered using the chantys "Paddy Doyle's Boots" and "Heave Her Up an' Bust Her" when raising sail, although the latter seems to have been written originally for use at the capstan. Call the cook, the mate, ' n captain too Heave an' bust her All us out the whole dunn crew Heave her up an ' bust her. Most of the sailors interviewed by Walton stated that while they could recall many ballads and focsle songs, they had trouble remembering the chantys sung aboard ship. Most said that the chantymen made them up as they went along and there are many examples of freshwater adaptations of salt water chantys. "Rolling Home" was written by a passenger en route from America to England, but it was quickly picked up by sailors of various nationalities and homeports who sang it at the capstan when homeward bound. Here is a Great Lakes version of"Rolling Home" remembered by Robert "Brokenback" Collen: Rolling home, rolling home, Rolling home across the sea; Rolling home to old Chicago, Rolling home old town to thee. We'll leave the ladies now , me lads, And all our money we'll foresake, We'll weigh the anchor cheerily, And steer for the open lake. Oh, we'll steer for the rolling lake, And lads, we 'll set the flowing sail, And to the town of Buffalo We 'll show th' old ship's tail. Oh, we'll beat the length of Erie, With Long Point upon our lee; We'll hail a tug ' neath Passage Or tow from Point Pelee. Up the length of old Lake Huron With our canvas at its best, We 'll drive across the Sag 'naw Bay With a wind from out the west. Through the Straits, a boat to windward, Far astern the isle Bob-lo; SEA HISTORY, SUMMER 1988