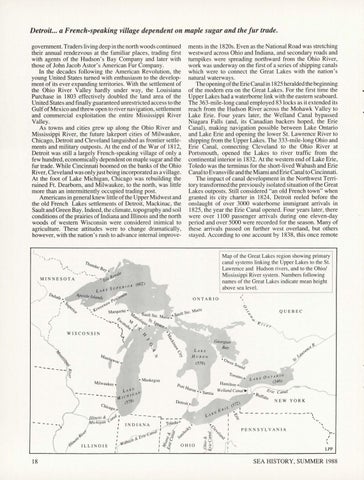 Detroit... a French-speaking village dependent on maple sugar and the fur trade. government. Traders living deep in the north woods continued their annual rendezvous at the familiar places, trading first with agents of the Hudson&#39;s Bay Company and later with those of John Jacob Astor&#39;s American Fur Company. In the decades following the American Revolution, the young United States turned with enthusiasm to the development of its ever expanding territories. With the settlement of the Ohio River Valley hardly under way, the Louisiana Purchase in 1803 effectively doubled the land area of the United States and finally guaranteed unrestricted access to the Gulf of Mexico and threw open to river navigation , settlement and commercial exploitation the entire Mississippi River Valley. As towns and cities grew up along the Ohio River and Mississippi River, the future lakeport cities of Milwaukee, Chicago, Detroit and Cleveland languished as frontier settlements and military outposts. At the end of the War of 18 l 2, Detroit was still a largely French-speaking village of only a few hundred, economically dependent on maple sugar and the fur trade. While Cincinnati boomed on the banks of the Ohio River, Cleveland was only just being incorporated as a village. At the foot of Lake Michigan, Chicago was rebuilding the ruined Ft. Dearborn, and Milwaukee, to the north, was little more than an intermittently occupied trading post. Americans in general knew little of the Upper Midwest and the old French Lakes settlements of Detroit, Mackinac, the Sault and Green Bay. Indeed, the climate, topography and soi l conditions of the prairies of Indiana and Illinois and the north woods of western Wisconsin were considered inimical to agriculture. These attitudes were to change dramatically, however, with the nation&#39;s rush to advance internal improve-

ments in the 1820s. Even as the National Road was stretching westward across Ohio and Indiana, and secondary roads and turnpikes were spreading northward from the Ohio River, work was underway on the first of a series of shipping canals which were to connect the Great Lakes with the nation&#39;s natural waterways. The opening of the Erie Canal in 1825 heralded the beginning of the modem era on the Great Lakes. For the first time the Upper Lakes had a waterborne link with the eastern seaboard. The 363-mile-long canal employed 83 locks as it extended its reach from the Hudson River across the Mohawk Valley to Lake Erie. Four years later, the Welland Canal bypassed Niagara Falls (and, its Canadian backers hoped, the Erie Canal), making navigation possible between Lake Ontario and Lake Erie and opening the lower St. Lawrence River to shipping from the Upper Lakes. The 333-mile-long Ohio and Erie Canal, connecting Cleveland to the Ohio River at Portsmouth, opened the Lakes to river traffic from the continental interior in 1832. At the western end of Lake Erie, Toledo was the terminus for the short-lived Wabash and Erie Canal to Evansville and the Miami and Erie Canal to Cincinnati. The impact of canal development in the Northwest Territory transformed the previously isolated situation of the Great Lakes outposts. Still considered &quot;an old French town&quot; when granted its city charter in 1824, Detroit reeled before the onslaught of over 3000 waterborne immigrant arrivals in 1825, the year the Erie Canal opened. Four years later, there were over l 100 passenger arrivals during one eleven-day period and over 5000 were recorded for the season. Many of these arrivals passed on further west overland, but others stayed. According to one account by 1838, this once remote