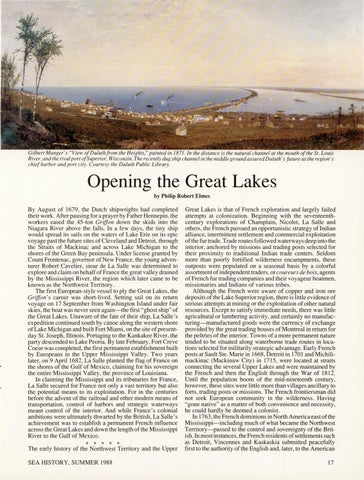 Gilbert Munger' s "View of Duluth from the Heights ," painted in 1871. In the distance is the natural channel at the mouth of the St. Louis River, and the rival port ofSuperior, Wisconsin. The recently dug ship channel in the middle ground assured Duluth's future as the region's chief harbor and port city. Courtesy the Duluth Public library.

By August of 1679, the Dutch shipwrights had completed their work. After pausing for a prayer by Father Hennepin, the workers eased the 45 -ton Griffon down the skids into the Niagara River above the falls. In a few days, the tiny sh ip would spread its sails on the waters of Lake Erie on its epic voyage past the future sites of Cleveland and Detroit, through the Straits of Mackinac and across Lake Michigan to the shores of the Green Bay peninsula. Under license granted by Count Frontenac, governor of New France, the young adventurer Robert Cavelier, sieur de La Salle was determined to explore and claim on behalf of France the great valley drained by the Mississippi River, the region which later came to be known as the Northwest Territory. The first European-style vessel to ply the Great Lakes, the Griffon's career was short-lived. Setting sail on its return voyage on 17 September from Washington Island under fair skies, the boat was never seen again-the first "ghost ship" of the Great Lakes. Unaware of the fate of their ship, La Salle's expedition continued south by canoe along the western shore of Lake Michigan and built Fort Miami, on the site of presentday St. Joseph, Illinois. Portaging to the Kankakee River, the party descended to Lake Peoria. By late February, Fort Creve Coeur was completed, the first permanent establishment built by Europeans in the Upper Mississ ippi Valley. Two years later, on 9 April 1682, La Salle planted the flag of France on the shores of the Gulf of Mexico, claiming for his sovereign the entire Mississippi Valley, the province of Louisiana. In claiming the Mississippi and its tributaries for France, La Salle secured for France not only a vast territory but also the potential means to its exploitation. For in the centuries before the advent of the railroad and other modem means of transportation, control of harbors and strategic waterways meant control of the interior. And while France's colonial ambitions were ultimately thwarted by the British, La Salle's achievement was to establish a permanent French influence across the Great Lakes and down the length of the Mississippi River to the Gulf of Mexico.

* * * *Territory and the Upper The early history of the* Northwest SEA HISTORY, SUMMER 1988

Great Lakes is that of French exploration and largely failed attempts at colonization. Beginning with the seventeenthcentury explorations of Champlain, Nicolet, La Salle and others, the French pursued an opportunistic strategy oflndian alliance, intermittent settlement and commercial exploitation of the fur trade. Trade routes followed waterways deep into the interior, anchored by missions and trading posts selected for their proximity to traditional Indian trade centers. Seldom more than poorly fortified wilderness encampments, these outposts were populated on a seasonal basis by a colorful assortment of independent traders, or coureurs de bois, agents of French fur trading companies and their voyageur boatmen, missionaries and Indians of various tribes. Although the French were aware of copper and iron ore deposits of the Lake Superior region, there is little evidence of serious attempts at mining or the exploitation of other natural resources. Except to satisfy immediate needs, there was little agricultural or lumbering activity, and certainly no manufacturing-manufactured goods were the currency of exchange provided by the great trading houses of Montreal in return for the peltries of the interior. Towns of a more permanent nature tended to be situated along waterborne trade routes in locations selected for militarily strategic advantage. Early French posts at Sault Ste. Marie in 1668, Detroit in.1701 and Michilimackinac (Mackinaw City) in 1715, were located at straits connecting the several Upper Lakes and were maintained by the French and then the English through the War of 1812. Until the population boom of the mid-nineteenth century, however, these sites were little more than villages ancillary to forts , trading posts or missions. The French frontiersman did not seek European community in the wilderness. Having "gone native" as a matter of both convenience and necessity, he could hardly be deemed a colonist. In 17 63, the French dominions in North America east of the Mississippi-including much of what became the Northwest Territory-passed to the control and sovereignty of the British. In most instances, the French residents of settlements such as Detroit, Vincennes and Kaskaskia submitted peacefully first to the authority of the English and, later, to the American 17