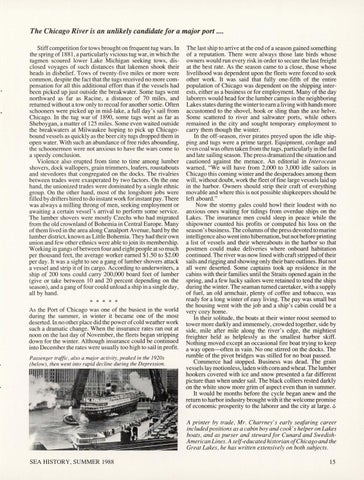 The Chicago River is an unlikely candidate for a major port .... Stiff competition for tows brought on frequent tug wars. In the spring of 188 I , a particularly vicious tug war, in which the tugmen scoured lower Lake Michigan seeking tows, disclosed voyages of such distances that lakemen shook their heads in disbelief. Tows of twenty-five miles or more were common, despite the fact that the tugs received no more compensation for all this additional effort than if the vessels had been picked up just outside the breakwater. Some tugs went northward as far as Racine, a distance of 70 miles, and returned without a tow only to recoal for another sortie. Often schooners were picked up in mid-lake, a full day's sail from Chicago. In the tug war of 1890, some tugs went as far as Sheboygan, a matter of 125 miles. Some even waited outside the breakwaters at Milwaukee hoping to pick up Chicagobound vessels as quickly as the beer city tugs dropped them in open water. With such an abundance of free rides abounding, the schoonermen were not anxious to have the wars come to a speedy conclusion. Violence also erupted from time to time among lumber shovers, dock wallopers, grain trimmers , loafers, roustabouts and stevedores that congregated on the docks. The rivalries between trades were exasperated by two factors. On the one hand, the unionized trades were dominated by a single ethnic group. On the other hand, most of the Longshore jobs were filled by drifters hired to do instant work for instant pay. There was always a milling throng of men, seeking employment or awaiting a certain vessel's arrival to perform some service. The lumber shavers were mostly Czechs who had migrated from the old crownland of Bohemia in Central Europe. Many of them lived in the area along Canal port Avenue, hard by the lumber district, known as Little Bohemia. They had their own union and few other ethnics were able to join its membership. Working in gangs of between four and eight people at so much per thousand feet, the average worker earned $1.50 to $2.00 per day. It was a sight to see a gang of lumber shovers attack a vessel and strip it of its cargo. According to underwriters, a ship of 200 tons could carry 200,000 board feet of lumber (give or take between 10 and 20 percent depending on the season), and a gang of four could unload a ship in a single day, all by hand.

***** As the Port of Chicago was one of the busiest in the world during the summer, in winter it became one of the most deserted. In no other place did the power of cold weather work such a dramatic change. When the insurance rates ran out at noon on the last day of November, the fleets began stripping down for the winter. Although insurance could be continued into December the rates were usually too high to sail in profit. Passenger traffic, also a major activity, peaked in the 1920s (below), then went into rapid decline during the Depression.

The last ship to arrive at the end of a season gained something of a reputation. There were always those late birds whose owners would run every risk in order to secure the last freight at the best rate. As the season came to a close, those whose livelihood was dependent upon the fleets were forced to seek other work. It was said that fully one-fifth of the entire population of Chicago was dependent on the shipping interests, either as a business or for employment. Many of the day laborers would head for the lumber camps in the neighboring Lakes states during the winter to earn a living with hands more accustomed to the shovel, hook or sling than the axe helve. Some scattered to river and saltwater ports, while others remained in the city and sought temporary employment to carry them though the winter. In the off-season, river pirates preyed upon the idle shipping and tugs were a prime target. Equipment, cordage and even coal was often taken from the tugs, particularly in the fall and late sailing season. The press dramatized the situation and cautioned against the menace. An editorial in Interocean warned, "We will have from 2,000 to 3,000 idle sailors in Chicago this coming winter and the desperadoes among them will, without doubt, work the fleet of fine large vessels laid up in the harbor. Owners should strip their craft of everything movable and where this is not possible shipkeepers should be left aboard." Now the stormy gales could howl their loudest with no anxious ones waiting for tidings from overdue ships on the Lakes. The insurance men could sleep in peace while the shipowner counted his profits or computed his loss on the season's business. The columns of the press devoted to marine intelligence also went into hibernation, but not before printing a list of vessels and their whereabouts in the harbor so that postmen could make deliveries where onboard habitation continued. The river was now lined with craft stripped of their sails and rigging and showing only their bare outlines. But not all were deserted. Some captains took up residence in the cabins with their families until the Straits opened again in the spring, and a few lucky sailors were retained to tend the ships during the winter. The seaman turned caretaker, with a supply of fuel, an old armchair, plenty of coffee and tobacco, was ready for a long winter of easy living. The pay was small but the housing went with the job and a ship's cabin could be a very cozy home. In their solitude, the boats at their winter roost seemed to tower more darkly and immensely, crowded together, side by side, mile after mile along the river 's edge, the mightiest freighter held as helplessly as the smallest harbor skiff. Nothing moved except an occasional fire boat trying to keep a way open--often in vain. No one stirred on the docks. The rumble of the pivot bridges was stilled for no boat passed. Commerce had stopped. Business was dead. The grain vessels lay motionless, laden with com and wheat. The lumber hookers covered with ice and snow presented a far different picture than when under sail. The black colliers rested darkly on the white snow more grim of aspect even than in summer. It would be months before the cycle began anew and the return to harbor industry brought with it the welcome promise of economic prosperity to the laborer and the city at large . .t

A printer by trade , Mr. Charrney' s early seafaring career included positions as a cabin boy and cook's helper on Lakes boats, and as purser and steward for Cunard and SwedishAmericanlines. A self-educated historian ofChicago and the Great Lakes, he has written extensively on both subjects. SEA HISTORY, SUMMER 1988