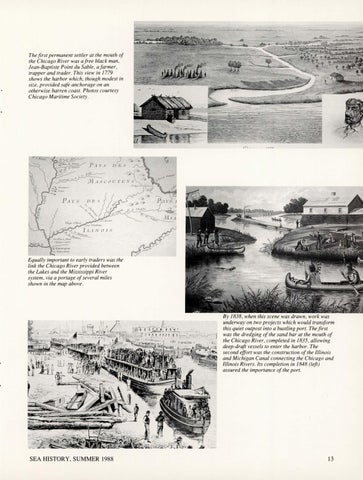 The first permanent settler at the mouth of the Chicago River was a free black man , Jean-Baptiste Point du Sable , a farmer , trapper and trader. This view in 1779 shows the harbor which, though modest in size, provided safe anchorage on an otherwise barren coast. Photos courtesy Chicago Maritime Society.

Equally important to early traders was the link the Chicago River provided between the Lakes and the Mississippi River system, via a portage of several miles shown in the map above.

By 1838, when this scene was drawn, work was underway on two projects which would transform this quiet outpost into a bustling port. The first was the dredging of the sand bar at the mouth of the Chicago River, completed in 1835, allowing deep-draft vessels to enter the harbor. The second effort was the construction of the Illinois and Michigan Canal connecting the Chicago and Illinois Rivers. its completion in 1848 (left) assured the importance of the port.