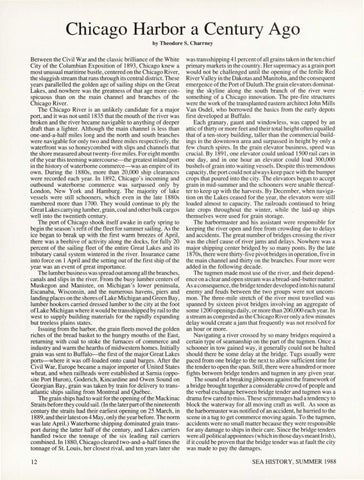 Chicago Harbor a Century Ago by Theodore S. Charrney

Between the Civil War and the classic brilliance of the White City of the Columbian Exposition of 1893 , Chicago knew a most unusual maritime bustle, centered on the Chicago River, the sluggish stream that runs through its central district. These years parallelled the golden age of sailing ships on the Great Lakes, and nowhere was the greatness of that age more conspicuous than on the main channel and branches of the Chicago River. The Chicago River is an unlikely candidate for a major port, and it was not until 1835 that the mouth of the river was broken and the river became navigable to anything of deeper draft than a lighter. Although the main channel is less than one-and-a-half miles long and the north and south branches were navigable for only two and three miles respectively, the waterfront was so honeycombed with slips and channels that the shore measured about twenty-five miles. For eight months of the year this teeming watercourse-the greatest inland port in the history of waterborne commerce-was an empire of its own. During the 1880s, more than 20,000 ship clearances were recorded each year. In 1892, Chicago 's incoming and outbound waterborne commerce was surpassed only by London, New York and Hamburg. The majority of lake vessels were still schooners, which even in the late 1880s numbered more than 1700. They would continue to ply the Great Lakes carrying lumber, grain, coal and other bulk cargos well into the twentieth century. The port of Chicago shook itself awake in early spring to begin the season's refit of the fleet for summer sailing. As the ice began to break up with the first warm breezes of April, there was a beehive of activity along the docks, for fully 20 percent of the sailing fleet of the entire Great Lakes and its tributary canal system wintered in the river. Insurance came into force on 1 April and the setting out of the first ship of the year was an event of great importance. The lumber business was spread out among all the branches, canals and slips in the river. From the busy lumber centers of Muskegon and Manistee, on Michigan 's lower peninsula, Escanaba, Wisconsin, and the numerous havens, piers and landing places on the shores of Lake Michigan and Green Bay, lumber hookers carried dressed lumber to the city at the foot of Lake Michigan where it would be transshipped by rail to the west to supply building materials for the rapidly expanding but treeless plains states. Issuing from the harbor, the grain fleets moved the golden riches of the bread basket to the hungry mouths of the East, returning with coal to stoke the furnaces of commerce and industry and warm the hearths of midwestem homes. Initially grain was sent to Buffalo-the first of the major Great Lakes ports-where it was off-loaded onto canal barges. After the Civil War, Europe became a major importer of United States wheat, and when railheads were established at Samia (opposite Port Huron), Goderich , Kincardine and Owen Sound on Georgian Bay, grain was taken by train for delivery to transatlantic ships sailing from Montreal and Quebec. The grain ships had to wait for the opening of the Mackinac Straits before they could sail. (In the later part of the nineteenth century the straits had their earliest opening on 25 March, in 1889, and theirlatest on 4 May, only the year before. The norm was late April.) Waterborne shipping dominated grain transport during the latter half of the century, and Lakes carriers handled twice the tonnage of the six leading rail carriers combined. In 1880, Chicago cleared two-and-a-half times the tonnage of St. Louis, her closest rival, and ten years later she 12

was transshipping 41 percent of all grains taken in the ten chief primary markets in the country. Her supremacy as a grain port would not be challenged until the opening of the fertile Red River Valley in the Dakotas and Manitoba, and the consequent emergence of the Port of Duluth.The grain elevators dominating the skyline along the south branch of the river were something of a Chicago innovation. The pre-fire structures were the work of the transplanted eastern architect John Mill s Yan Osdel, who borrowed the basics from the early depots first developed at Buffalo. Each granary, gaunt and windowless, was capped by an attic of thirty or more feet and their total height often equalled that of a ten-story building, taller than the commercial buildings in the downtown area and surpassed in height by only a few church spires. In the grain elevator business, speed was crucial. By 1891 , one elevator could unload 1500 rail cars in one day, and in one hour an elevator could load 300,000 bushels of grain into waiting vessels. Despite this tremendous capacity, the port could not always keep pace with the bumper crops that poured into the city. The elevators began to accept grain in mid-summer and the schooners were unable thereafter to keep up with the harvests. By December, when navigation on the Lakes ceased for the year, the elevators were still loaded almost to capacity. The railroads continued to bring late crops throughout the winter, while the laid-up ships themselves were used for grain storage. The harbormaster and his assistant were responsible for keeping the river open and free from crowding due to delays and accidents. The great number of bridges crossing the river was the chief cause of river jams and delays. Nowhere was a major shipping center bridged by so many ponts. By the late 1870s, there were thirty-five pivot bridges in operation, five in the main channel and thirty on the branches. Four more were added in the following decade. The tugmen made most use of the river, and their dependence on a clear and open stream was a bread-and-butter matter. As a consequence, the bridge tender developed into his natural enemy and feuds between the two groups were not uncommon. The three-mile stretch of the river most travelled was spanned by sixteen pivot bridges involving an aggregate of some 1200openings daily , or more than 200,000each year. In a stream as congested as the Chicago River only a few minutes delay would create ajam that frequently was not resolved for an hour or more. Navigating a river crossed by so many bridges required a certain type of seamanship on the part of the tugmen . Once a schooner in tow gained way, it generally could not be halted should there be some delay at the bridge. Tugs usually were paced from one bridge to the next to allow sufficient time for the tender to open the span. Still, there were a hundred or more fights between bridge tenders and tugmen in any given year. The sound of a breakingjibboom against the framework of a bridge brought together a considerable crowd of people and the verbal exchange between bridge tender and tugmen was a drama few cared to miss. These scrimmages had a tendency to block the waterway for all moving craft as well. As soon as the harbormaster was notified of an accident, he hurried to the scene in a tug to get commerce moving again. To the tugmen, accidents were no small matter because they were responsible for any damage to ships in their care. Since the bridge tenders were all political appointees (which in those days meant Irish), if it could be proven that the bridge tender was at fault the city was made to pay the damages. SEA HISTORY, SUMMER 1988