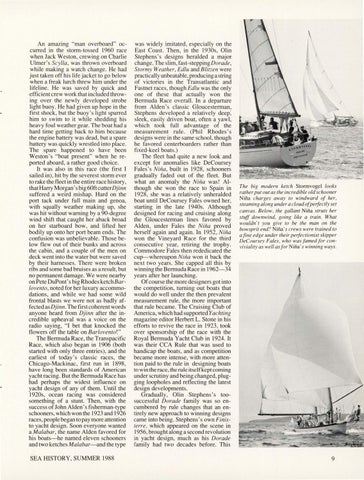 An amazing &quot;man overboard&quot; occurred in the storm-tossed 1960 race when Jack Weston , crewing on Charlie Ulmer&#39;s Scylla, was thrown overboard while making a watch change. He had just taken off his life jacket to go below when a freak lurch threw him under the lifeline. He was saved by quick and efficient crew work that included throwing over the newly developed strobe light buoy. He had given up hope in the first shock, but the buoy &#39;s light spurred him to swim to it while shedding his heavy foul weather gear. The boat had a hard time getting back to him because the engine battery was dead, but a spare battery was quickly wrestled into place. The spare happened to have been Weston &#39;s &quot;boat present&quot; when he reported aboard, a rather good choice. It was also in this race (the fust I sailed in), hit by the severest storm ever to rake the fleet in the entire race history, thatHarry Morgan &#39;s big 60ft cutter Djinn suffered a weird mishap. Hard on the port tack under full main and genoa, with squally weather making up, she was hit without warning by a 90-degree wind shift that caught her aback broad on her starboard bow, and lifted her bodily up onto her port beam ends. The confusion was unbelievable. Those below flew out of their bunks and across the cabin, and a couple of the men on deck went into the water but were saved by their harnesses. There were broken ribs and some bad bruises as a result, but no permanent damage. We were nearby on Pete DuPont&#39;s big Rhodes ketch Barlovento, noted for her luxury accommodations, and while we had some wild frontal blasts we were not as badly affected as Djinn. The first coherent words anyone heard from Djinn after the incredible upheaval was a voice on the radio saying, &quot;I bet that knocked the flowers off the table on Barlovento!&quot; The Bermuda Race, the Transpacific Race, which also began in 1906 (both started with only three entries), and the earliest of today&#39; s classic races, the Chicago-Mackinac, first run in 1898, have long been standards of American yacht racing. But the Bermuda Race has had perhaps the widest influence on yacht design of any of them. Until the 1920s, ocean racing was considered something of a stunt. Then, with the success of John Alden &#39;s fisherman-type schooners, which won the 1923 and 1926 races , people began to pay more attention to yacht design. Soon everyone wanted a Malabar, the name Alden favored for his boats-he named eleven schooners and two ketches Malabar-and the type SEA HISTORY, SUMMER 1988

was widely imitated, especially on the East Coast. Then, in the 1930s, Olin Stephens &#39;s designs heralded a major change. The slim , fast-steppingDorade, Stormy Weather, Edlu and Blitzen were practically unbeatable, producing a string of victories in the Transatlantic and Fastnet races, though Edlu was the only one of these that actually won the Bermuda Race overall. In a departure from Alden &#39;s classic Gloucesterman, Stephens developed a relatively deep; sleek, easily driven boat, often a yawl, which took full advantage of the measurement rule. (Phil Rhodes&#39;s designs were in the same school , though he favored centerboarders rather than fixed-keel boats.) The fleet had quite a new look and except for anomalies like DeCoursey Fales&#39;s Nina , built in 1928, schooners gradually faded out of the fleet. But what an anomaly the Nina was! Although she won the race to Spain in 1928, she was a relatively unheralded boat until Decoursey Fales owned her, starting in the late 1940s. Although designed for racing and cruising along the Gloucesterman lines favored by Alden, under Fales the Nina proved herself again and again. In 1952, Nina won the Vineyard Race for the third consecutive year, retiring the trophy. Commodore Fales then rededicated the cup-whereupon Nina won it back the next two years. She capped all this by winningtheBermudaRacein 1962-34 years after her launching. Of course the more designers got into the competition, turning out boats that would do well under the then prevalent measurement rule, the more important that rule became. The Cruising Club of America, whjch had supported Yachting magazine editor Herbert L. Stone in hi s efforts to revive the race in 1923, took over sponsorship of the race with the Royal Bermuda Yacht Club in 1924. It was their CCA Rule that was used to handicap the boats, and as competition became more intense, with more attention paid to the rule in designing boats to win the race, the rule itself kept coming under scrutiny and being changed, plugging loopholes and reflecting the latest design developments. Gradually, Olin Stephens&#39;s toosuccessful Dorade family was so encumbered by rule changes that an entirely new approach to winning designs came into being. Stephens &#39;s own Finisterre, which appeared on the scene in 1956, brought along a second revolution in yacht design , much as hjs Dorade family had two decades before. This

The big modern ketch Storrnvogel looks rather put out as the incredible old schooner Nina charges away to windward of her, steaming along under a cloud ofpeifectly set canvas. Below, the gallant Nifia struts her stuff downwind, going like a train. What wouldn&#39;t you give to be the man on the bowsprit end? Nifia&#39; screws were trained to a fin e edge under their pe1fectionist skipper DeCoursey Fales , who was famed for conviviality as well as fo r Nifia&#39; s winning ways.