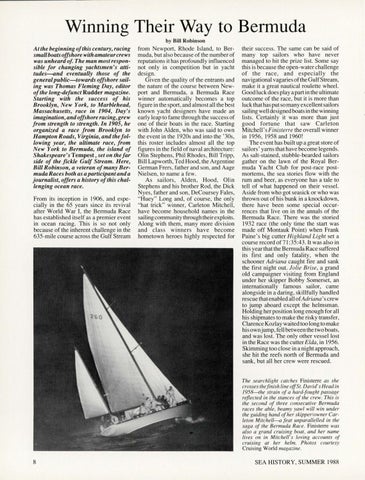 Winning Their Way to Bermuda by Bill Robinson

At the beginning ofthis century, racing smallboatsoffshorewithamateurcrews was unheard of. The man most responsible for changing yachtsmen's attitudes-and eventually those of the general public-towards offshore sailing was Thomas Fleming Day, editor of the long-defunct Rudder magazine. Starting with the success of his Brooklyn, New York, to Marblehead, Massachusetts, race in 1904, Day's imagination, and offshore racing, grew from strength to strength. In 1905, he organized a race from Brooklyn to Hampton Roads, Virginia, and the following year, the ultimate race, from New York to Bermuda, the island of Shakespeare's Tempest, set on the far side of the fickle Gulf Stream. Here, Bill Robinson, a veteran of many Bermuda Races both as a participant and a journalist, offers a history of this challenging ocean race. From its inception in 1906, and especially in the 65 years since its revival after World War I, the Bermuda Race has established itself as a premier event in ocean racing. This is so not only because of the inherent cha! lenge in the 635-mile course across the Gulf Stream

from Newport, Rhode Island, to Bermuda, but also because of the number of reputations it has profoundly influenced not only in competition but in yacht design. Given the quality of the entrants and the nature of the course between Newport and Bermuda, a Bermuda Race winner automatically becomes a top figure in the sport, and almost all the best known yacht designers have made an early leap to fame through the success of one of their boats in the race. Starting with John Alden, who was said to own the event in the 1920s and into the '30s, thi s roster includes almost all the top figures in the field of naval architecture: Olin Stephens, Phil Rhodes , Bill Tripp, Bill Lapworth, Ted Hood, the Argentine German Frers, father and son, and Aage Nielsen, to name a few. As sailors, Alden, Hood , Olin Stephens and his brother Rod, the Dick Nyes, father and son, Decoursey Fales, "Huey" Long and, of course, the only "hat trick" winner, Carleton Mitchell , have become household names in the sailing community through their exploits. Along with them , many more division and class winners have become hometown heroes highly respected for

their success. The same can be said of many top sai lors who have never managed to hit the prize list. Some say this is because the open-water challenge of the race, and especially the navigational vagaries of the Gulf Stream, make it a great nautical roulette wheel. Good luck does play a part in the ultimate outcome of the race, but it is more than luck that has put so many excellent sailors sailing well designed boats in the winning lists. Certainly it was more than just good fortune that saw Carleton Mitchell 's Finisterre the overall winner in 1956, 1958 and 1960! The event has built up a great store of sailors' yarns that have become legends. As salt-stained, stubble-bearded sailors gather on the lawn of the Royal Bermuda Yacht Club for post-race postmortems, the sea stories flow with the rum and beer, as everyone has a tale to tell of what happened on their vessel. Aside from who got seasick or who was thrown out of his bunk in a knockdown, there have been some special occurrences that live on in the annals of the Bermuda Race. There was the storied 1932 race (the only time the start was made off Montauk Point) when Frank Paine 's big cutter Highland Light set a course record of 71 :35:43. It was also in this year that the Bermuda Race suffered its first and only fatality, when the schooner Adriana caught fire and sank the first night out. Jolie Brise, a grand old campaigner visiting from England under her skipper Bobby Somerset, an internationally famous sailor, came alongside in a daring, skillfully handled rescue that enabled all of Adriana's crew to jump aboard except the helmsman. Holding her position long enough for all his shipmates to make the risky transfer, Clarence Kozlay waited too long to make his own jump, fell between the two boats, and was lost. The only other vessel lost in the Race was the cutter Elda, in 1956. Skimming too close in a night approach , she hit the reefs north of Bermuda and sank, but all her crew were rescued. Th e searchlight catches Finisterre as she crosses the finish line offSt. David's Head in 1958--lhe strain of a hard-fought passage reflected in the stances of the crew. This is the second of three consecutive Bermuda races the able, beamy yawl will win under the guiding hand of her skipper/owner Carleton Mitchell-a feat unparallelled in the saga of the Bermuda Race. Finisterre was also a grand cruising boat, and her name lives on in Mitchell' s loving accounts of cruising at her helm . Photos courtesy Cruising World magazine.