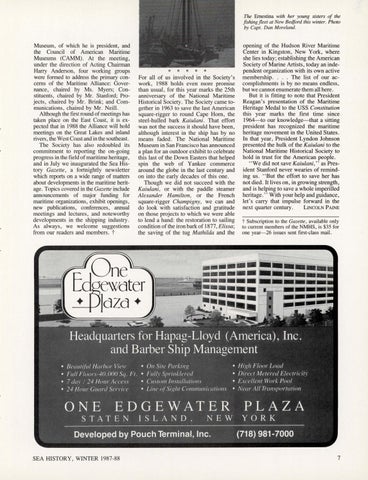 The Ernestina with her young sisters of the fishing fleet at New Bedford this winter. Photo by Capt. Dan Moreland.

Museum, of which he is president, and the Council of American Maritime Museums (CAMM). At the meeting, under the direction of Acting Chairman Harry Anderson , four working groups were formed to address the primary concerns of the Maritime Alliance: Governance, chaired by Ms. Myers; Constituents, chaired by Mr. Stanford; Projects, chaired by Mr. Brink; and Communications , chaired by Mr. Neill. Although the first round of meetings has taken place on the East Coast, it is expected that in 1988 the Alliance will hold meetings on the Great Lakes and inland rivers , the West Coast and in the southeast. The Society has also redoubled its commitment to reporting the on-going progress in the field of maritime heritage, and in July we inaugurated the Sea History Gazette, a fortnightly newsletter which reports on a wide range of matters about developments in the maritime heritage. Topics covered in the Gazette include announcements of major funding for maritime organizations, exhibit openings, new publications, conferences, annual meetings and lectures, and noteworthy developments in the shipping industry. As always, we welcome suggestions from our readers and members. t

For all of us involved in the Society&#39;s work, 1988 holds even more promise than usual , for this year marks the 25th anniversary of the National Maritime Historical Society. The Society came together in 1963 to save the last American square-rigger to round Cape Hom, the steel-hulled bark Kaiulani . That effort was not the success it should have been, although interest in the ship has by no means faded. The National Maritime Museum in San Francisco has announced a plan for an outdoor exhibit to celebrate this last of the Down Easters that helped spin the web of Yankee commerce around the globe in the last century and on into the early decades of this one. Though we did not succeed with the Kaiulani, or with the paddle steamer Alexander Hamilton, or the French square-rigger Champigny, we can and do look with satisfaction and gratitude on those projects to which we were able to lend a hand: the restoration to sailing condition of the iron bark of 1877, Elissa ; the saving of the tug Mathilda and the

opening of the Hudson River Maritime Center in Kingston, New York, where she lies today; establishing the American Society of Marine Artists, today an independent organization with its own active membership .. . . The list of our accomplishments is by no means endless, but we cannot enumerate them all here. But it is fitting to note that President Reagan &#39; s presentation of the Maritime Heritage Medal to the USS Constitution this year marks the first time since 1964-to our knowledge-that a sitting president has recognized the maritime heritage movement in the United States. In that year, President Lyndon Johnson presented the hulk of the Kaiulani to the National Maritime Historical Society to hold in trust for the American people. &quot;We did not save Kaiulani,&quot; as President Stanford never wearies of reminding us. &quot;But the effort to save her has not died. It lives on, in growing strength, and is helping to save a whole imperilled heritage.&#39;&#39; With your help and guidance, let&#39;s carry that impulse forward in the LINCOLN PAINE next quarter century.

t Subscription to the Gazette, available only to current members of the NMHS, is $35 for one year-26 issues sent first-class mail.