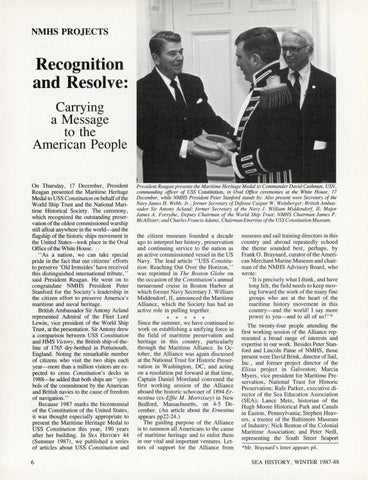 Recognition and Resolve: Carrying a Message to the American People On Thursday, 17 December, President Reagan presented the Maritime Heritage Medal to USS Constitution on behalf of the World Ship Trust and the National Maritime Historical Society. The ceremony, which recognized the outstanding preservation of the oldest commissioned warship still afloat anywhere in the world-and the flagship of the historic ships movement in the United States-took place in the Oval Office of the White House. &#39;&#39;As a nation, we can take special pride in the fact that our citizens&#39; efforts to preserve &#39;Old Ironsides&#39; have received this distinguished international tribute,&quot; said President Reagan. He went on to congratulate NMHS President Peter Stanford for the Society&#39;s leadership in the citizen effort to preserve America&#39;s maritime and naval heritage . British Ambassador Sir Antony Acland represented Admiral of the Fleet Lord Lewin, vice president of the World Ship Trust, at the presentation. Sir Antony drew a comparison between USS Constitution and HMS Victory, the British ship-of-theline of 1765 dry-berthed in Portsmouth, England. Noting the remarkable number of citizens who visit the two ships each year-more than a million visitors are expected to cross Constitution&#39;s decks in 1988--he added that both ships are &quot;symbols of the commitment by the American and British navies to the cause of freedom of navigation.&quot; Because 1987 marks the bicentennial of the Constitution of the United States, it was thought especially appropriate to present the Maritime Heritage Medal to USS Constitution this year, 190 years after her building. In SEA HISTORY 44 (Summer 1987), we published a series of articles about USS Constitution and

the citizen museum founded a decade ago to interpret her history, preservation and continuing service to the nation as an active commissioned vessel in the US Navy. The lead article &#39;&#39;USS Constitution: Reaching Out Over the Horizon,&quot; was reprinted in The Boston Globe on the occasion of the Constitution&#39;s annual turnaround cruise in Boston Harbor at which former Navy Secretary J. William Middendorf, II, announced the Maritime Alliance, which the Society has had an active role in pulling together. * * * * * Since the summer, we have continued to work on establishing a unifying force in the field of maritime preservation and heritage in this country, particularly through the Maritime Alliance. In October, the Alliance was again discussed at the National Trust for Historic Preservation in Washington, DC, and acting on a resolution put forward at that time, Captain Daniel Moreland convened the first working session of the Alliance aboard the historic schocner of 1894 Ernestina (ex-Effie M. Morrissey) in New Bedford, Massachusetts, on 4-5 December. (An article about the Ernestina appears pp22-24.) The guiding purpose of the Alliance is to summon all Americans to the cause of maritime heritage and to enlist them in our vital and important ventures. Letters of support for the Alliance from

museum and sail training directors in this country and abroad repeatedly echoed the theme sounded best, perhaps, by Frank 0. Braynard, curator of the American Merchant Marine Museum and chairman of the NMHS Advisory Board, who wrote: &quot;It is precisely what I think, and have long felt, the field needs to keep moving forward the work of the many fine groups who are at the heart of the maritime history movement in this country-and the world! I say more power to you-and to all of us!&quot;* The twenty-four people attending the first working session of the Alliance represented a broad range of interests and expertise in our work. Besides Peter Stanford and Lincoln Paine of NMHS, those present were David Brink, director of Sail, Inc., and former project director of the Elissa project in Galveston; Marcia Myers, vice president for Maritime Preservation, National Trust for Historic Preservation; Rafe Parker, executive director of the Sea Education Association (SEA); Lance Metz, historian of the Hugh Moore Historical Park and Canals in Easton, Pennsylvania; Stephen Heavers, a trustee of the Baltimore Museum of Industry; Nick Benton of the Colonial Maritime Association; and Peter Neill, representing the South Street Seaport *Mr. Braynard&#39; s letter appears p4.