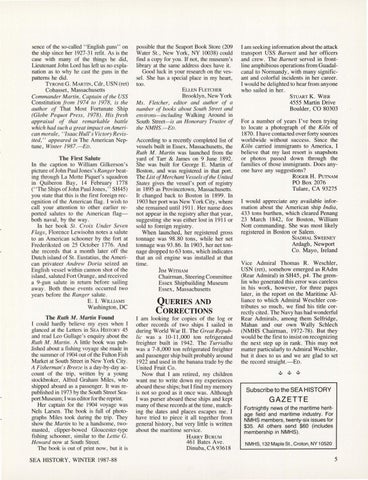 sence of the so-called &quot; English guns &quot; on the ship since her 1927-31 refit. As is the case with many of the things he did, Lieutenant John Lord has left us no explanation as to why he cast the guns in the patterns he did. TYRONEG. MARTIN , Cdr, USN (ret) Cohasset, Massachusetts Commander Martin , Captain of the USS Constitution from 1974 to 1978, is the author of That Most Fortunate Ship (Globe Pequot Press, 1978). His fresh appraisal of that remarkable battle which had such a great impact on American morale, &#39;&#39;Isaac Hull&#39;s Victory Revisited, &#39;&#39; appeared in The American Neptune , Winter 1987.-ED .

The First Salute In the caption to William Gilkerson &#39; s picture of John Paul Jones&#39; s Ranger beating through La Motte Piquet&#39;s squadron in Quiberon Bay, 14 February 1778 (&#39; &#39;The Ships of John Paul Jones, &#39;&#39; SH45) you state that this is the first foreign recognition of the American flag . I wish to call your attention to other earlier reported salutes to the American flagboth naval, by the way . In her book St. Croix Under Seven Flags , Florence Lewisohn notes a salute to an American schooner by the fort at Frederiksted on 25 October 1776. And she records that a month later off the Dutch island of St. Eustatius, the American privateer Andrew Doria seized an English vessel within cannon shot of the island, saluted Fort Orange, and received a 9-gun salute in return before sailing away. Both these events occurred two years before the Ranger salute. E. I. WILLIAMS Washington, DC

The Ruth M. Martin Found I could hardly believe my eyes when I glanced at the Letters in SEA HISTORY 45 and read Leo Gullage&#39;s enquiry about the Ruth M . Martin . A little book was published about a fishing voyage she made in the summer of 1904 out of the Fulton Fish Market at South Street in New York City. A Fisherman&#39;s Breeze is a day-by-day account of the trip, written by a young stockbroker, Alfred Graham Miles, who shipped aboard as a passenger. It was republished in 1973 by the South Street Seaport Museum; I was editor for the reprint. Her captain for the 1904 voyage was Nels Larsen. The book is full of photographs Miles took during the trip . They show the Martin to be a handsome, twomasted, clipper-bowed Gloucester-type fishing schooner, similar to the Lettie G. Howard now at South Street. The book is out of print now , but it is SEA HISTORY, WINTER 1987-88

possible that the Seaport Book Store (209 Water St., New York, NY 10038) could find a copy for you . If not, the museum&#39; s library at the same address does have it. Good luck in your research on the vessel. She has a special place in my heart, too. ELLEN FLETCHER Brooklyn, New York Ms . Fletcher, editor and author of a number of books about South Street and environs-including Walking Around in South Street-is an Honorary Trustee of the NMHS. - ED. According to a recently completed list of vessels built in Essex, Massachusetts, the Ruth M. Martin was launched from the yard of Tarr &amp; James on 9 June 1892. She was built for George E. Martin of Boston, and was registered in that port. The List of Merchant Vessels of the United States gives the vessel &#39; s port of registry in 1895 as Provincetown , Massachusetts. It changed back to Boston in 1899 . In 1903 her port was New York City , where she remained until 1911 . Her name does not appear in the registry after that year, suggesting she was either lost in 1911 or sold to foreign registry . When launched, her registered gross tonnage was 98.80 tons, while her net tonnage was 93 .86. In 1903 , her net tonnage dropped to 63 tons, which indicates that an oil engine was installed at that time. J1MWITHAM Chairman, Steering Committee Essex Shipbuilding Museum Essex, Massachusetts

QUERIES AND CORRECTIONS I am looking for copies of the log or other records of two ships I sailed in during World War II. The Great Republic was a I 0-11 ,000 ton refrigerated freighter built in 1942. The Turrialba was a 7-8,000 ton refrigerated freighter and passenger ship built probably around 1922 and used in the banana trade by the United Fruit Co. Now that I am retired , my children want me to write down my experiences aboard these ships ; but I find my memory is not so good as it once was. Although I was purser aboard these ships and kept many of these records at the time , matching the dates and places escapes me. I have tried to piece it all together from general history , but very little is written about the maritime service. HARRY BURUM 461 Bates Ave . Dinuba, CA 93618

I am seeking information about the attack transport USS Barnett and her officers and crew . The Barnett served in frontline amphibious operations from Guadalcanal to Normandy, with many significant and colorful incidents in her career. I would be delighted to hear from anyone who sailed in her. STUART K. WIER 4555 Martin Drive Boulder, CO 80303 For a number of years I&#39;ve been trying to locate a photograph of the Koln of 1870. I have contacted over forty sources worldwide without success. Since the Koln carried immigrants to America, I believe that my last resort is snapshots or photos passed down through the families of those immigrants. Does anyone have any suggestions? ROGER H . PUTNAM PO Box 2076 Tulare, CA 93275 I would appreciate any available information about the American ship India , 433 tons burthen, which cleared Penang 23 March 1842, for Boston , William Nott commanding . She was most likely registered in Boston or Salem. SIADHAL SWEENEY Ardagh, Newport Co. Mayo, Ireland Vice Admiral Thomas R. Weschler, USN (ret), somehow emerged as RAdm (Rear Admiral) in SH45, p4. The gremlin who generated this error was careless in his work , however, for three pages later, in the report on the Maritime Alliance to which Admiral Weschler contributes so much, we find his title correctly cited. The Navy has had wonderful Rear Admirals, among them Selfridge, Mahan and our own Wally Schlech (NMHS Chairman, 1972-78) . But they would be the first to insist on recognizing the next step up in rank. This may not matter particularly to Admiral Weschler, but it does to us and we are glad to set the record straight-ED.