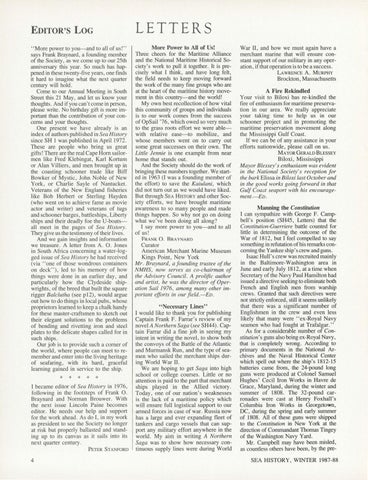 EDITOR&#39;S LOG &quot;More power to you-and to all of us! &quot; says Frank Braynard, a founding member of the Society, as we come up to our 25th anniversary this year. So much has happened in these twenty-five years , one finds it hard to imagine what the next quarter century will hold. Come to our Annual Meeting in South Street this 21 May, and let us know your thoughts. And if you can&#39;tcome in person, please write. No birthday gift is more important than the contribution of your concerns and your thoughts. One present we have already is an index of authors published in Sea History since SH I was published in April 1972. These are people who bring us great gifts! There are the real Cape Hom sailormen like Fred Klebingat, Karl Kortum or Alan Villiers , and men brought up in the coasting schooner trade like Biff Bowker of Mystic , John Noble of New York, or Charlie Sayle of Nantucket. Veterans of the New England fisheries like Bob Herbert or Sterling Hayden (who went on to achieve fame as movie actor and writer) and veterans of tugs and schooner barges, battleships , Liberty ships and their deadly foe the U-boatsall meet in the pages of Sea History. They give us the testimony of their lives. And we gain insights and information we treasure. A letter from A. 0. Jones in South Africa concerning a water-logged issue of Sea History he had received (via &quot;one of those wondrous containers on deck&quot;), led to his memory of how things were done in an earlier day, and particularly how the Clydeside shipwrights, of the breed that built the square rigger Balclutha (seep 12), would argue out how to do things in local pubs, whose proprietors learned to keep a chalk handy for these master-craftsmen to sketch out their elegant solutions to the problems of bending and rivetting iron and steel plates to the delicate shapes called for in such ships . Our job is to provide such a comer of the world, where people can meet to remember and enter into the living heritage of seafaring, with its hard, graceful learning gained in service to the ship.

* * * * * I became editor of Sea History in 1976, following in the footsteps of Frank 0 . Braynard and Norman Brouwer. With the next issue Lincoln Paine becomes editor. He needs our help and support for the work ahead . As do I, in my work as president to see the Society no longer at risk but properly ballasted and standing up to its canvas as it sails into its next quarter century. PETER STANFORD 4

LETTERS More Power to All of Us! Three cheers for the Maritime Alliance and the National Maritime Historical Society&#39;s work to pull it together. It is precisely what I think, and have long felt, the field needs to keep moving forward the work of the many fine groups who are at the heart of the maritime history movement in this country-and the world! My own best recollection of how vital this community of groups and individuals is to our work comes from the success ofOpSail &#39;76, which owed so very much to the grass roots effort we were ablewith relative ease-to mobilize, and whose members went on to carry out some great successes on their own. The little Jennie is one example from near home that stands out. And the Society should do the work of bringing these numbers together. We started in 1963 (I was a founding member of the effort) to save the Kaiulani, which did not tum out as we would have liked. But through SEA HISTORY and other Society efforts, we have brought maritime awareness to so many people and made things happen . So why not go on doing what we&#39;ve been doing all along? I say more power to you-and to all of us! FRANK

Curator American Merchant Marine Museum Kings Point, New York Mr. Braynard, a founding trustee of the NMHS, now serves as co-chairman of the Advisory Council. A prolific author and artist, he was the director of Operation Sail 1976, among many other important efforts in our field.-ED .

&quot;Necessary Lines&quot; I would like to thank you for publishing Captain Frank F. Farrar&#39;s review of my novel A Northern Saga (see SH44). Captain Farrar did a fine job in seeing my intent in writing the novel, to show both the convoys of the Battle of the Atlantic and Murmansk Run, and the type of seamen who sailed the merchant ships during World War II. We are hoping to get Saga into high school or college courses. Little or no attention is paid to the part that merchant ships played in the Allied victory. Today, one of our nation&#39;s weaknesses is the lack of a maritime policy which will ensure full logistical support to our armed forces in case of war. Russia now has a large and ever expanding fleet of tankers and cargo vessels that can support any military effort anywhere in the world . My airh in writing A Northern Saga was to show how necessary continuous supply lines were during World

War II, and how we must again have a merchant marine that will ensure constant support of our military in any operation, if that operation is to be a success. LAWRENCE A. MURPHY Brockton, Massachusetts A Fire Rekindled Your visit to Biloxi has re-kindled the fire of enthusiasm for maritime preservation in our area. We really appreciate your taking time to help us in our schooner project and in promoting the maritime preservation movement along the Mississippi Gulf Coast. If we can be of any assistance in your efforts nationwide, please call on us. MAYOR GERALD BLESSEY Biloxi, Mississippi Mayor Blessey&#39; s enthusiasm was evident in the National Society&#39;s reception for the bark Elissa in Biloxi last October and in the good works going forward in that Gulf Coast seaport with his encouragement.-Eo.

Manning the Constitution I can sympathize with George F. Campbell&#39;s position (SH45, Letters) that the Constitution-Guerriere battle counted for little in determining the outcome of the War of 18 I 2, but I feel compelled to say something in refutation of his remarks concerning the Yankee ship&#39;s crew and guns. Isaac Hull&#39;s crew was recruited mainly in the Baltimore-Washington area in June and early July I 812, at a time when Secretary of the Navy Paul Hamilton had issued a directive seeking to eliminate both French and English men from warship crews. Granted that such directives were not strictly enforced, still it seems unlikely that there was a significant number of Englishmen in the crew and even less likely that many were &quot;ex-Royal Navy seamen who had fought at Trafalgar.&quot; As for a considerable number of Constitution&#39;s guns also being ex-Royal Navy, that is completely wrong. According to primary documents in the National Archives and the Naval Historical Center which spell out where the ship&#39;s 1812-15 batteries came from, the 24-pound long guns were produced at Colonel Samuel Hughes&#39; Cecil Iron Works in Havre de Grace, Maryland, during the winter and summer of 1808. The 32-pound carronades were cast at Henry Foxhall&#39;s Columbia Iron Works in Georgetown, DC, during the spring and early summer of 1808. All of these guns were shipped to the Constitution in New York at the direction of Commandant Thomas Tingey of the Washington Navy Yard. Mr. Campbell may have been misled, as countless others have been, by the preSEA HISTORY, WINTER 1987-88