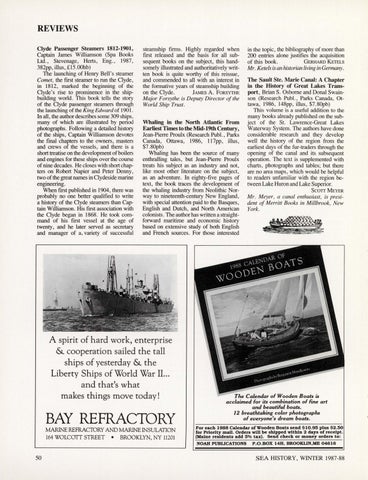 REVIEWS Clyde Passenger Steamers 1812-1901, Captain James Williamson (Spa Books Ltd., Stevenage, Herts, Eng., 1987, 382pp, illus, ÂŁ15.00hb) The launching of Henry Bell&#39;s steamer Comet, the first steamer to run the Clyde, in 1812, marked the beginning of the Clyde&#39;s rise to prominence in the shipbuilding world. This book tells the story of the Clyde passenger steamers through the launching of the King Edward of 1901 . In all, the author describes some 309 ships, many of which are illustrated by period photographs. Following a detailed history of the ships, Captain Williamson devotes the final chapters to the owners, masters and crews of the vessels , and there is a short treatise on the development of boilers and engines for these ships over the course of nine decades. He closes with short chapters on Robert Napier and Peter Denny, two of the great names in Clydeside marine engineering. When first published in 1904, there was probably no one better qualified to write a history of the Clyde steamers than Captain Williamson . His first association with the Clyde began in 1868. He took command of his first vessel at the age of twenty, and he later served as secretary and manager of a. variety of successful

steamship firms . Highly regarded when first released and the basis for all subsequent books on the subject, this handsomely illustrated and authoritatively written book is quite worthy of this reissue , and commended to all with an interest in the formative years of steamship building JAMES A. FORSYTHE on the Clyde. Major Forsythe is Deputy Director of the World Ship Trust.

Whaling in the North Atlantic From Earliest Times to the Mid-19th Century, Jean-Pierre Proulx (Research Publ., Parks Canada, Ottawa, 1986, 117pp, illus, $7.80pb) Whaling has been the source of many enthralling tales, but Jean-Pierre Proulx treats his subject as an industry and not, like most other literature on the subject, as an adventure. In eighty-five pages of text, the book traces the development of the whaling industry from Neolithic Norway to nineteenth-century New England, with special attention paid to the Basques, English and Dutch, and North American colonists. The author has written a straightforward maritime and economic history based on extensive study of both English and French sources. For those interested

in the topic, the bibliography of more than 200 entries alone justifies the acquisition of this book. GERHARD KETELS Mr. Ketels is an historian living in Germany.

The Sault Ste. Marie Canal: A Chapter in the History of Great Lakes Transport, Brian S. Osborne and Donal Swainson (Research Publ. , Parks Canada, Ottawa, 1986, 148pp, illus, $7 .80pb) This volume is a useful addition to the many books already published on the subject of the St. Lawrence-Great Lakes Waterway System. The authors have done considerable research and they develop well the history of the region from the earliest days of the fur-traders through the opening of the canal and its subsequent operation. The text is supplemented with charts , photographs and tables; but there are no area maps , which would be helpful to readers unfamiliar with the region between Lake Huron and Lake Superior. ScorrMEYER Mr. Meyer, a canal enthusiast, is president of Merritt Books in Millbrook, New York .

The Calendar of Wooden Boats is acclaimed for its combination of fine art and beautiful boats_. 12 breathtaking color photographs of everyone&#39;s dream boats. For each 1988 Calendar of Wooden Boats send $10.95 plus $2.50 for Priority mail. Orders will be shipped within 2 days of receipt. (Maine residents add 5% tax). Send check or money orders to: NOAH PUBLICATIONS P.O.BOX 14H, BROOKLIN.ME 04616