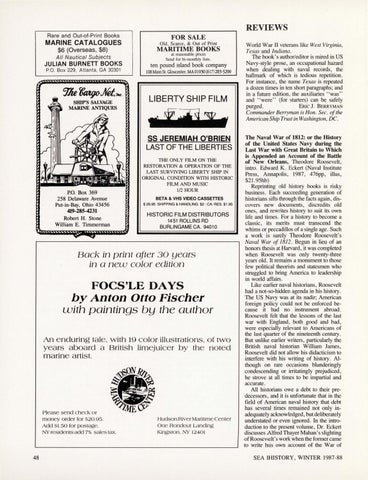 SS JEREMIAH O&#39;BRIEN LAST OF THE LIBERTIES THE ONLY FILM ON THE RESTORATION &amp; OPERATION OF THE LAST SURVIVING LIBERTY SHIP IN ORIGINAL CONDITION WITH HISTORIC FILM AND MUSIC 1(2 HOUR

Back in print after 30 years in a new color edition

FOCS&#39;LE DAYS by Anton Otto Fischer with paintings by the author An enduring tale, with 19 color illustrations, of two years aboard a British limejuicer by the noted marine artist.

World War II veterans like West Virginia, Texas and Indiana . The book&#39;s author/editor is mi.red in US Navy-style prose, an occupational hazard when dealing with naval records, the hallmark of which is tedious repetition. For instance, the name Texas is repeated a dozen times in ten short paragraphs; and in a future edition , the auxiliaries &quot;was&quot; and &quot; were&quot; (for starters) can be safely purged . ERIC J. BERRYMAN Commander Berryman is Hon . Sec. of the American Ship Trust in Washington, DC.

The Naval War of 1812: or the History of the United States Navy during the Last War with Great Britain to Which is Appended an Account of the Battle of New Orleans, Theodore Roosevelt, intro. Edward K. Eckert (Naval Institute Press, Annapolis, 1987 , 476pp, illus, $21.95hb) Reprinting old history books is risky business . Each succeeding generation of historians sifts through the facts again , discovers new documents, discredits old ones, and rewrites history to suit its own life and times . For a history to become a classic, its merits must transcend the whims or peccadillos of a single age. Such a work is surely Theodore Roosevelt&#39;s Naval War of 1812. Begun in lieu of an honors thesis at Harvard, it was completed when Roosevelt was only twenty-three years old. It remains a monument to those few political theorists and statesmen who struggled to bring America to leadership in world affairs. Like earlier naval historians, Roosevelt had a not-so-hidden agenda in his history . The US Navy was at its nadir; American foreign policy could not be enforced because it had no instrument abroad. Roosevelt felt that the lessons of the last war with England, both good and bad , were especially relevant to Americans of the last quarter of the nineteenth century . But unlike earlier writers, particularly the British naval historian William James , Roosevelt did not allow his didacticism to interfere with his writing of history . Although on rare occasions blunderingly condescending or irritatingly prejudiced, he strove at all times to be impartial and accurate. All historians owe a debt to their predecessors , and it is unfortunate that in the field of American naval history that debt has several times remained not only inadequately acknowledged, but deliberately understated or even ignored. In the introduction to the present volume, Dr. Eckert discusses Alfred Thayer Mahan &#39;s slighting of Roosevcelt&#39; s work when the former came to write h1is own account of the War of SEA JHISTORY, WINTER 1987-88