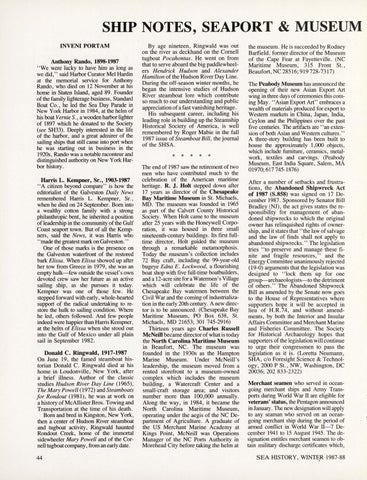 SHIP NOTES, SEAPORT &amp; MUSEUM INVENI PORTAM Anthony Rando, 1898-1987 &quot;We were lucky to have him as long as we did, &quot; said Harbor Curator Mel Hardin at the memorial service for Anthony Rando, who died on 12 November at his home in Staten Island, aged 89. Founder of the family lighterage business, Standard Boat Co., he led the Sea Day Parade in New York Harbor in 1984, at the helm of his boat Vernie S., a wooden harbor lighter of 1897 which he donated to the Society (see SH33). Deeply interested in the life of the harbor, and a great admirer of the sailing ships that still came into port when he was starting out in business in the 1920s, Rando was a notable raconteur and distinguished authority on New York Harbor history . Harris L. Kempner, Sr., 1903-1987 &quot;A citizen beyond compare&quot; is how the editorialist of the Galveston Daily News remembered Harris L. Kempner, Sr. , when he died on 24 September. Born into a wealthy cotton family with a strong philanthropic bent, he inherited a position of leadership in the community of the Gulf Coast seaport town. But of all the Kempners, said the News, it was Harris who &#39; &#39;made the greatest mark on Galveston.&#39;&#39; One of those marks is the presence on the Galveston waterfront of the restored bark Elissa. When Elissa showed up after her tow from Greece in 1979, she was an empty hulk-few outside the vessel &#39; s own devoted crew saw her future as an active sailing ship, as she pursues it today. Kempner was one of those few. He stepped forward with early, whole-hearted support of the radical undertaking to restore the hulk to sailing condition. Where he led, others followed . And few people indeed were happier than Harris Kempner, at the helm of Elissa when she stood out into the Gulf of Mexico under all plain sail in September 1982. Donald C. Ringwald, 1917-1987 On June 19, the famed steamboat historian Donald C. Ringwald died at his home in Loudonville, New York, after a brief illness. Author of the classic studies Hudson River Day Line (1965), The Mary Powell (1972) and Steamboats for Rondout (1981), he was at work on a history of McAllister Bros. Towing and Transportation at the time of his death. Born and bred in Kingston, New York, then a center of Hudson River steamboat and tugboat activity, Ringwald haunted Rondout Creek, home of the immortal sidewheeler Mary Powell and of the Cornell tugboat company, from an early date.

By age nineteen, Ringwald was out on the river as deckhand on the Cornell tugboat Pocahontas. He went on from that to serve aboard the big paddlewheelers Hendrick Hudson and Alexander Hamilton of the Hudson River Day Line. During the off-season winter months, he began the intensive studies of Hudson River steamboat lore which contribute so much to our understanding and public appreciation of a fast vanishing heritage. His subsequent career, including his leading role in building up the Steamship Historic~! Society of America, is well remembered by Roger Mabie in the fall 1987 issue of Steamboat Bill, the journal of the SHSA.

* * * * * The end of 1987 saw the retirement of two men who have contributed much to the celebration of the American maritime heritage. R. J. Holt stepped down after 17 years as director of the Chesapeake Bay Maritime Museum in St. Michaels , MD . The museum was founded in 1965 as part of the Calvert County Historical Society. When Holt came to the museum after 25 years with the Honeywell Corporation, it was housed in three small nineteenth-century buildings . Its first fulltime director, Holt guided the museum through a remarkable metamorphosis . Today the museum&#39;s collection includes 72 Bay craft, including the 99-year-old bugeye Edna E . Lockwood, a flourishing boat shop with five full-time boatbuilders , and a 12-acre site for a Watermen &#39;s Village which will celebrate the life of the Chesapeake Bay watermen between the Civil War and the corning of industrialization in the early 20th century. A new director is to be announced. (Chesapeake Bay Maritime Museum, PO Box 638, St. Michaels , MD 21653; 301 745-2916) Thirteen years ago Charles Russell McNeill became director of what is today the North Carolina Maritime Museum in Beaufort, NC . The museum was founded in the 1930s as the Hampton Marine Museum . Under McNeill&#39;s leadership , the museum moved from a rented storefront to a museum-owned complex which includes the museum building , a Watercraft Center and a small.:craft storage area; and visitors number more than 100,000 annually . Along the way, in 1984, it became the North Carolina Maritime Museum , operating under the aegis of the NC Department of Agriculture. A graduate of the US Merchant Marine Academy at Kings Point, McNeill was Operations Manager of the NC Ports Authority in Morehead City before .t.aking the helm at

the museum. He is succeeded by Rodney Barfield, former director of the Museum of the Cape Fear at Fayetteville. (NC Maritime Museum, 315 Front St. , Beaufort, NC 28516; 919 728-7317) The Peabody Museum has announced the opening of their new Asian Export Art wing in three days of ceremonies this coming May. &quot;Asian Export Art&quot; embraces a wealth of materials produced for export to Western markets in China, Japan, India, Ceylon and the Philippines over the past five centuries. The artifacts are &quot;an extension of both Asian and Western cultures.&quot; A three-story building has been built to house the approximately 1,000 objects, which include furniture , ceramics, metalwork, textiles and carvings. (Peabody Museum, East India Square, Salem, MA 01970; 617 745-1876) After a number of setbacks and frustrations , the Abandoned Shipwreck Act of 1987 (S.858) was signed on 17 December 1987 . Sponsored by Senator Bill Bradley (NJ) , the act gives states the responsibility for management of abandoned shipwrecks to which the original owner has relinquished rights of ownership, and it states that&#39; &#39;the law of salvage and the law of finds shall not apply to abandoned shipwrecks. &#39; &#39; The legislation tries &#39;&#39;to preserve and manage these finite and fragile resources, &quot; and the Energy Committee unanimously rejected (19-0) arguments that the legislation was designed to &quot; lock them up for one group-archaeologists-to the detriment of others .&quot; The Abandoned Shipwreck Bill as amended by the Senate now goes to the House of Representatives where supporters hope it will be accepted in lieu of H.R.74, and without amendments, by both the Interior and Insular Affairs Committee and Merchant Marine and Fisheries Committee. The Society for Historical Archaeology hopes that supporters of the legislation will continue to urge their congressmen to pass the legislation as it is . (Loretta Neumann, SHA, c/o Foresight Science &amp; Technology, 2000 P St., NW, Washington , DC 20036; 202 833-2322) Merchant seamen who served in oceangoing merchant ships and Army Transports during World War II are eligible for veterans&#39; status, the Pentagon announced in January. The new designation will apply to any seaman who served on an oceangoing merchant ship during the period of armed conflict in World War II-7 December 1941to15 August 1945 . The designation entitles merchant seamen to obtain military discharge certificates which, SEA HISTORY ,