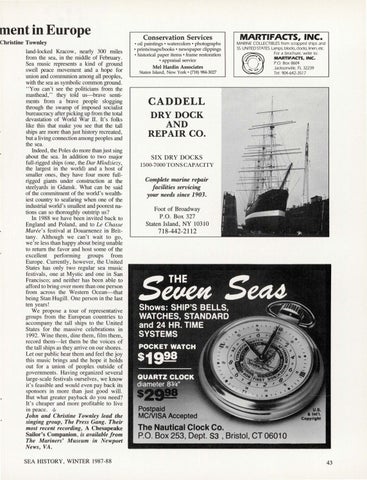 :m ent in Europe Christine Townley land-locked Kracow, nearly 300 miles from the sea, in the middle of February. Sea music represents a kind of ground swell peace movement and a hope for union and communion among all peoples, with the sea as symbolic common ground. &quot;You can&#39;t see the politicians from the masthead,&#39;&#39; they told us-brave sentiments from a brave people slogging through the swamp of imposed socialist bureaucracy after picking up from the total devastation of World War II. It&#39;s folks like this that make you see that the tall ships are more than just history recreated, but a living connection among peoples and the sea. Indeed , the Poles do more than just sing about the sea. In addition to two major full-rigged ships (one, the Dar Mlodziezy, the largest in the world) and a host of smaller ones, they have four more fullrigged giants under construction at the steelyards in Gdansk. What can be said of the commitment of the world&#39;s wealthiest country to seafaring when one of the industrial world&#39;s smallest and poorest nations can so thoroughly outstrip us? In 1988 we have been invited back to England and Poland, and to Le Chasse Maree&#39;s fest ival at Douarnenez in Brittany. Although we can&#39;t wait to go, we&#39;re less than happy about being unable to return the favor and host some of the excellent performing groups from Europe. Currently, however, the United States has only two regular sea music festivals, one at Mystic and one in San Francisco; and neither has been able to afford to bring over more than one person from across the Western Ocean-that being Stan Hugill. One person in the last ten years! We propose a tour of representative groups from the European countries to accompany the tall ships to the United States for the massive celebrations in 1992. Wine them, dine them , film them , record them-let them be the voices of the tall ships as they arrive on our shores. Let our public hear them and feel the joy this music brings and the hope it holds out for a union of peoples outside of governments. Having organized several large-scale festivals ourselves, we know it&#39;s feasib le and would even pay back its sponsors in more than just good will. But what greater payback do you need? It&#39; s cheaper and more profitable to live in peace. &#39;1&gt;

John and Christine Townley lead the singing group, The Press Gang. Their most recent recording, A Chesapeake Sailor&#39;s Companion, is available from The Mariners&#39; Museum in Newport News, VA. SEA HISTORY, WINTER 1987-88