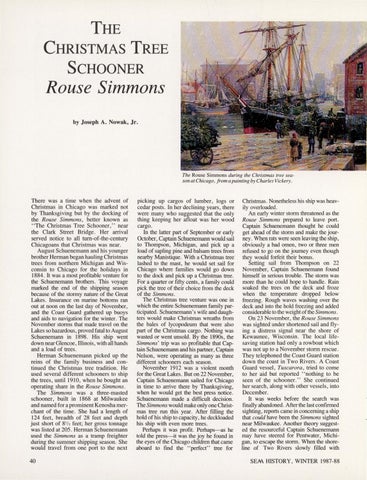 The Rouse Simmons during the Christmas tree season at Chicago, from a painting by Charles Vickery .

There was a time when the advent of Christmas in Chicago was marked not by Thanksgiving but by the docking of the Rouse Simmons, better known as &quot;The Christmas Tree Schooner,&quot; near the Clark Street Bridge. Her arrival served notice to all tum-of-the-century Chicagoans that Christmas was near. August Schuenemann and his younger brother Herman began hauling Christmas trees from northern Michigan and Wisconsin to Chicago for the holidays in 1884. It was a most profitable venture for the Schuenemann brothers. This voyage marked the end of the shipping season because of the stormy nature of the Great Lakes. Insurance on marine bottoms ran out at noon on the last day of November, and the Coast Guard gathered up buoys and aids to navigation for the winter. The November storms that made travel on the Lakes so hazardous, proved fatal to August Schuenemann in 1898. His ship went down near Glencoe, Illinois, with all hands and a load of trees. Herman Schuenemann picked up the reins of the family business and continued the Christmas tree tradition. He used several different schooners to ship the trees , until 1910, when he bought an operating share in the Rouse Simmons . The Simmons was a three-masted schooner, built in 1868 at Milwaukee and named for a prominent Kenosha merchant of the time. She had a length of 124 feet, breadth of 28 feet and depth just short of 8 1/z feet; her gross tonnage was listed at 205 . Herman Schuenemann used the Simmons as a tramp freighter during the summer shipping season. She would travel from one port to the next 40

picking up cargos of lumber, logs or cedar posts . In her declining years, there were many who suggested that the only thing keeping her afloat was her wood cargo. In the latter part of September or early October, Captain Schuenemann would sail to Thompson , Michigan, and pick up a load of sapling pine and balsam trees from nearby Manistique. With a Christmas tree lashed to the mast, he would set sail for Chicago where families would go down to the dock and pick up a Christmas tree. For a quarter or fifty cents , a family could pick the tree of their choice from the deck of the Simmons . The Christmas tree venture was one in which the entire Schuenemann family participated . Schuenemann&#39;s wife and daughters would make Christmas wreaths from the bales of lycopodeum that were also part of the Christmas cargo. Nothing was wasted or went unsold. By the 1890s, the Simmons&#39; trip was so profitable that Captain Schuenemann and his partner, Captain Nelson, were operating as many as three different schooners each season. November 1912 was a violent month for the Great Lakes . But on 22 November, Captain Schuenemann sailed for Chicago in time to arrive there by Thanksgiving, when he would get the best press notice. Schuenemann made a difficult decision. The Simmons would make only one Christmas tree run this year. After filling the hold of his ship to capacity , he deckloaded his ship with even more trees . Perhaps it was profit. Perhaps-as he told the press-it was the joy he found in the eyes of the Chicago children that came aboard to find the &quot;perfect&quot; tree for

Christmas. Nonetheless his ship was heavily overloaded. An early winter storm threatened as the Rouse Simmons prepared to leave port. Captain Schuenemann thought he could get ahead of the storm and make the journey. When rats were seen leaving the ship, obviously a bad omen, two or three men refused to go on the journey even though they would forfeit their bonus. Setting sail from Thompson on 22 November, Captain Schuenemann found himself in serious trouble. The storm was more than he could hope to handle. Rain soaked the trees on the deck and froze when the temperature dropped below freezing. Rough waves washing over the deck and into the hold freezing and added considerable to the weight of the Simmons . On 23 November, the Rouse Simmons was sighted under shortened sail and flying a distress signal near the shore of Kewaunee, Wisconsin. The local lifesaving station had only a rowboat which was not up to a November storm rescue . They telephoned the Coast Guard station down the coast in Two Rivers. A Coast Guard vessel, Tuscarora, tried to come to her aid but reported &#39;&#39;nothing to be seen of the schooner.&quot; She continued her search, along with other vessels, into December. It was weeks before the search was finally abandoned. After the last confirmed sighting, reports came in concerning a ship that could have been the Simmons sighted near Milwaukee. Another theory suggested the resourceful Captain Schuenemann may have steered for Pentwater, Michigan, to escape the storm. When the shoreline of Two Rivers slowly filled with SEM HISTORY, WINTER 1987-88