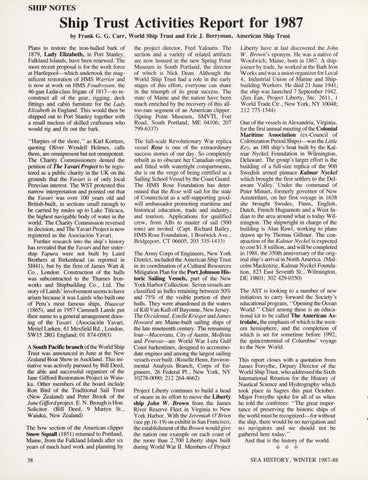 Ship Trust Activities Report for 1987 by Frank G. G. Carr, World Ship Trust and Eric J. Berryman, American Ship Trust Plans to restore the iron-hulled bark of 1879, Lady Elizabeth, in Port Stanley, Falkland Islands, have been renewed . The most recent proposal is for the work force at Hartlepool-which undertook the magnificent restoration of HMS Warrior and is now at work on HMS Foudroyant, the 46-gun Leda-class frigate of 1817-to reconstruct all of the gear, rigging , deck fittings and cabin furniture for the Lady Elizabeth in England . This would then be shipped out to Port Stanley together with a small nucleus of skilled craftsmen who would rig and fit out the bark.

the project director, Fred Yalouris. The section and a variety of related artifacts are now housed in the new Spring Point Museum in South Portland , the director of which is Nick Dean. Although the World Ship Trust had a role in the early stages of this effort, everyone can share in the triumph of its great success. The state of Maine and the nation have been much enriched by the recovery of this alltoo-rare segment of an American clipper. (Spring Point Museum, SMVTI, Fort Road, South Portland, ME 04106; 207 799-6337)

&#39;&#39;Harpies of the shore,&#39;&#39; as Karl Kortum, quoting Oliver Wendell Holmes, calls them, are omnipresent but not omnipotent. The Charity Commissioners denied the petition of The Yavari Project to be registered as a public charity in the UK on the grounds that the Yavari is of only local Peruvian interest. The WST protested this narrow interpretation and pointed out that the Yavari was over 100 years old and British-built, in sections small enough to be carried by mules up to Lake Titicaca, the highest navigable body of water in the world. The Charity Commission reversed its decision , and The Yavari Project is now registered as the Asociaci6n Yavari . Further research into the ship&#39;s history has revealed that the Yavari and her sistership Yapura were not built by Laird Brothers at Birkenhead (as reported in SH41) , but by the firm of James Watt &amp; Co., London . Construction of the hulls was subcontracted to the Thames Ironworks and Shipbuilding Co., Ltd. The story of Lairds&#39; involvement seems to have arisen because it was Lairds who built one of Peru &#39;s most famous ships, Huascar (1865), and in 1957 Cammell Lairds put their name to a general arrangement drawing of the Yavari. (Asociaci6n Yavari , Meriel Larken, 61 Mexfield Rd ., London, SW15 2RG England; 01 874-0583)

The full-scale Revolutionary War replica vessel Rose is one of the extraordinary success stories of our day . So completely rebuilt as to obscure her Canadian origins and fitted with watertight compartments, she is on the verge of being certified as a Sailing School Vessel by the Coast Guard. The HMS Rose Foundation has determined that the Rose will sail for the state of Connecticut as a self-supporting goodwill ambassador promoting maritime and historical education, trade and industry, and tourism. Applications for qualified crew , from ABs to master of sail (500 tons) are invited . (Capt. Richard Bailey, HMS Rose Foundation , I Bostwick Ave., Bridgeport, CT 06605 ; 203 335-1433)

A South Pacific branch of the World Ship Trust was announced in June at the New Zealand Boat Show in Auckland. This initiative was actively pursued by Bill Deed , the able and successful organizer of the Jane Gifford Restoration Project in Waiuku. Other members of the board include Ron Bird of the Traditional Sail Trust (New Zealand) and Peter Brook of the Jane Gifford project. E. N. Brough is Hon . Solicitor. (Bill Deed, 9 Martyn St., Waiuku , New Zealand) The bow section of the American clipper Snow Squall (1851) returned to Portland , Maine, from the Falkland Islands after six years of much hard work and planning by 38

The Army Corps of Engineers , New York District, included the American Ship Trust in its coordination of a Cultural Resources Mitigation Plan for the Port Johnson Historic Sailing Vessels, part of the New York Harbor Collection. Seven vessels are classified as hulks retaining between 50% and 75% of the visible portion of their hulls . They were abandoned in the waters of Kill Van Kull off Bayonne, New Jersey . The Occidental, Estelle Krieger and James Howard are Maine-built sailing ships of the late nineteenth century . The remaining four-Maceratta, City of Austin, Molfetta and Penrose-are World War I-era Gulf Coast barkentines, designed to accommodate engines and among the largest sailing vessels ever built. (Roselle Henn, Environmental Analysis Branch, Corps of Engineers , 26 Federal Pl ., New York, NY 10278-0090; 212 264-4662) Project Liberty continues to build a head of steam in its effort to move the Liberty ship John W. Brown from the James River Reserve Fleet in Virginia to New York Harbor. With the Jeremiah O&#39;Brien (see pp 16-19) on exhibit in San Francisco, the establishment of the Brown would give the nation one example on each coast of the more than 2,700 Liberty ships built during World War II. Members of Project

Liberty have at last discovered the John W. Brown&#39;s eponym . He was a native of Woolwich, Maine, born in 1867. A shipjo iner by trade, he worked at the Bath Iron Works and was a union organizer for Local 4 , Industrial Union of Marine and Shipbuilding Workers . He died 21 June 1941; the ship was launched 7 September 1942. (Jim Ean, Project Liberty, Ste. 261 l, 1 World Trade Ctr., New York, NY 10048; 212 775-1544) One of the vessels in Alexandria, Virginia, for the first annual meeting of the Colonial Maritime Association (ex-Council of Colonization Period Ships}--was the Little Key, an 18ft ship&#39;s boat built by the Kalmar Nyckel Foundation in Wilmington, Delaware. The group&#39;s larger effort is the building of a full-size replica of the 90ft Swedish armed pinnace Kalmar Nyckel which brought the first settlers to the Delaware Valley . Under the command of Peter Minuet, formerly governor of New Amsterdam, on her first voyage in 1638 she brought Swedes, Finns, English , Dutch, French Huguenots and a West Indian to the area around what is today Wilmington. The shipwright in charge of the building is Alan Rawl, working to plans drawn up by Thomas Gillmer. The construction of the Kalmar Nyckel is expected to cost $1.8 million, and will be completed in 1988, the 350th anniversary of the original ship&#39;s arrival in North America. (Malcolm Mackenzie, Kalmar Nyckel Foundation, 823 East Seventh St., Wilmington, DE 19801 ; 302 429-0350) The AST is looking to a number of new initiatives to carry forward the Society&#39;s educational program , &#39;&#39;Opening the Ocean World.&quot; Chief among these is an educational kit to be called The American Astrolabe, the emphasis of which is the western hemisphere, and the completion of which is set for sometime before 1992, the quincentennial of Columbus&#39; voyage to the New World. This report closes with a quotation from James Forsythe, Deputy Director of the World Ship Trust, who addressed the Sixth International Reunion for the History of Nautical Science and Hydrography which took place in Sagres this past October. Major Forsythe spoke for all of us when he told the conferees: &quot; The great importance of preserving the historic ships of the world must be recognized-for without the ship, there would be no navigation and no navigators and we should not be gathered here today .&quot; And that is the history of the world.