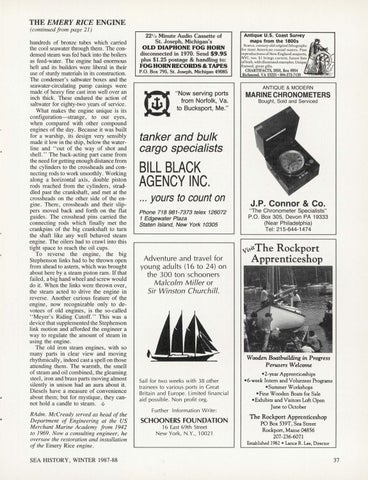 THE EMERY RICE ENGINE (continued from page 21) hundreds of bronze tubes which carried the cool seawater through them . The condensed steam was fed back into the boilers as feed-water. The engine had enormous heft and its builders were liberal in their use of sturdy materials in its construction. The condenser&#39;s saltwater boxes and the seawater-circulating pump casings were made of heavy fine cast iron well over an inch thick. These endured the action of saltwater for eighty-two years of service. What makes the engine unique is its configuration-strange, to our eyes, when compared with other compound engines of the day . Because it was built for a warship, its design very sensibly made it low in the ship, below the waterline and &quot;out of the way of shot and shell.&quot; The back-acting part came from the need for getting enough distance from the cylinders to the crossheads and connecting rods to work smoothly. Working along a horizontal axis, double piston rods reached from the cylinders , straddled past the crankshaft, and met at the crossheads on the other side of the engine. There, crossheads and their slippers moved back and forth on the flat guides. The crosshead pins carried the connecting rods which finally met the crankpins of the big crankshaft to tum the shaft like any well behaved steam engine. The oilers had to crawl into this tight space to reach the oil cups. To reverse the engine, the big Stephenson links had to be thrown open from ahead to astern, which was brought about here by a steam piston ram. If that failed, a big hand wheel and screw would do it. When the links were thrown over, the steam acted to drive the engine in reverse. Another curious feature of the engine, now recognizable only to devotees of old engines, is the so-called &quot;Meyer&#39;s Riding Cutoff.&quot; This was a device that supplemented the Stephenson link motion and afforded the engineer a way to regulate the amount of steam in using the engine. The old iron steam engines, with so many parts in clear view and moving rhythmically , indeed cast a spell on those attending them. The warmth, the smell of steam and oil combined, the gleaming steel, iron and brass parts moving almost silently in unison had an aura about it. Diesels have a measure of convenience about them ; but for mystique, they cannot hold a candle to steam. w RAdm . McCready served as head of the Department of Engineering at the US Merchant Marine Academy from 1942 to 1969 . Now a consulting engineer, he oversaw the restoration and installation of the Emery Rice engine. SEA HISTORY, WINTER 1987-88