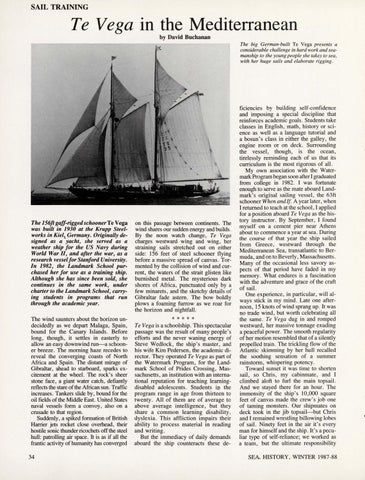 Te Vega in the Mediterranean by David Buchanan The big German-built Te Vega presents a considerable challenge in hard work and seamanship to the young people she takes to sea, with her huge sails and elaborate rigging .

The 156/t gaff-rigged schooner Te Vega was built in 1930 at the Krupp Steelworks in Kieli Germany. Originally designed as a yacht, she served as a weather ship for the US Navy during World War II, and after the war, as a research vesselforStanford University. Jn 1982, the Landmark School purchased her for use as a training ship. Although she has since been sold, she continues in . the same work, under charter to the Landmark School, carrying students in programs that run through the academic year. The wind saunters about the horizon undecidedly as we depart Malaga, Spain , bound for the Canary Islands. Before long , though, it settles in easterly to allow an easy downwind run-a schooner breeze. The morning haze recedes to reveal the converging coasts of North Africa and Spain. The distant mirage of Gibraltar, ahead to starboard, sparks excitement at the wheel. The rock&#39;s sheer stone face , a giant water catch, defiantly reflects the stare of the African sun. Traffic increases. Tankers slide by, bound for the oil fields of the Middle East. United States naval vessels form a convoy, also on a crusade to that region . Suddenly, a spiked formation of British Harrier jets rocket close overhead, their hostile sonic thunder ricochets off the steel hull: patrolling air space. It is as if all the frantic activity of humanity has converged 34

on this passage between continents. The wind shares our sudden energy and builds. By the noon watch change, Te Vega charges westward wing and wing, her straining sails stretched out on either side: 156 feet of steel schooner flying before a massive spread of canvas. Tormented by the collision of wind and current, the waters of the strait glisten like burnished metal. The mysterious dark shores of Africa, punctuated only by a few minarets, and the sketchy details of Gibraltar fade astern. The bow boldly plows a foaming furrow as we roar for the horizon and nightfall.

Te Vega is a schoolship. This spectacular passage was the result of many people&#39;s efforts and the never waning energy of Steve Wedlock, the ship&#39;s master, and his wife Kim Pedersen, the academic director. They operated Te Vega as part of the Watermark Program , for the Landmark School of Prides Crossing , Massachusetts, an institution with an international reputation for teaching leamingdisabled adolescents. Students ip the program range in age from thirteen to twenty . All of them are of average to above average intelligence , but they share a common learning disability, dyslexia . This affliction impairs their ability to process material in reading and writing. But the immediacy of daily demands aboard the ship counteracts these de-

ficiencies by building self-confidence and imposing a special discipline that reinforces academic goals. Students take classes in English, math, history or science as well as a language tutorial and a bosun &#39;s class in either the galley, the engine room or on deck. Surrounding the vessel, though, is the ocean, tirelessly reminding each of us that its curriculum is the most rigorous of all . My own association with the Watermark Program began soon after I graduated from college in 1982. I was fortunate enough to serve as the mate aboard Landmark&#39;s original sailing vessel, the 63ft schooner When and If. A year later, when I returned to teach at the school , I applied for a position aboard Te Vega as the history instructor. By September, I found myself on a cement pier near Athens about to commence a year at sea. During the course of that year the ship sailed from Greece , westward through the Mediterranean Sea, transatlantic to Bermuda, and on to Beverly, Massachusetts. Many of the occasional less savory aspects of that period have faded in my memory . What endures is a fascination with the adventure and grace of the craft of sail. One experience, in particular, will always stick in my mind. Late one afternoon, 15 knots of wind sprang up . It was no trade wind, but worth celebrating all the same. Te Vega dug in and romped westward, her massive tonnage exuding a peaceful power. The smooth regularity of her motion resembled that of a silently propelled train. The trickling flow of the Atlantic skimming by her hull recalled the soothing sensation of a summer rainstorm, whispering potency. Toward sunset it was time to shorten sail, so Chris, my cabinmate, and I climbed aloft to furl the main topsail. And we stayed there for an hour. The immensity of the ship &#39;s 10,000 square feet of canvas made the crew&#39;s job one of taming monsters. Our shipmates on deck took in the jib topsail-but Chris and I remained wrestling billowing lobes of sail. Ninety feet in the air it&#39;s every man for himself and the ship. It&#39;s a peculiar type of self-reliance; we worked as a team , but the ultimate responsibility SEA HISTORY , WINTER 1987-88