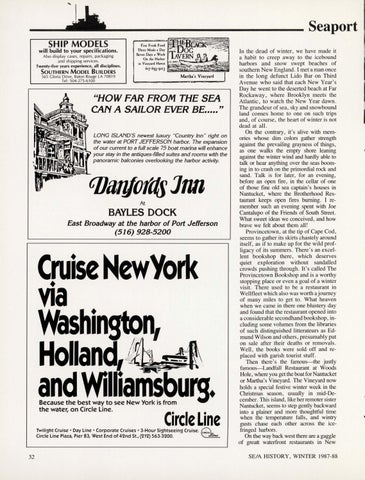 will build to your specifications. Al so display cases, repairs, packaging and shipping services. Twenty-five years experience, all disciplines.

Three Meals a Day Seven Days a Week On the Hubor in Vincyud Haven ~&#39;tiii~~

&quot;HOW FAR FROM THE SEA CAN A SAILOR EVER BE..... &quot; LONG ISLAND &#39;S newest luxury &quot;Country Inn &quot; right on the water at PORT JEFFERSON harbor. The expansion of our current to a full scale 75 boat marina will enhance your stay in the antiques-filled suites and rooms with the panoramic balconies overlooking the harbor activity.

BAYLES DOCK East Broadway at the harbor of Port Jefferson

In the dead of winter, we have made it a habit to creep away to the icebound harbors and snow swept beaches of southern New England. I met a man once in the long defunct Lido Bar on Third Avenue who said that each New Year&#39;s Day he went to the deserted beach at Far Rockaway, where Brooklyn meets the Atlantic, to watch the New Year dawn . The grandeur of sea, sky and snowbound land comes home to one on such trips and, of course, the heart of winter is not dead at all. On the contrary , it&#39; s alive with memories whose dim colors gather strength against the prevailing grayness of things, as one walks the empty shore leaning against the winter wind and hardly able to talk or hear anything over the seas booming in to crash on the primordial rock and sand. Talk is for later, for an evening, before an open fue, in the cellar of. one of those fine old sea captain &#39;s houses in Nantucket, where the Brotherhood Restaurant keeps open fires burning. I remember such an evening spent with Joe Cantalupo of the Friends of South Street. What sweet ideas we conceived, and how brave we felt about them all! Provincetown, at the tip of Cape Cod , seems to gather its skirts chastely around itself, as if to make up for the wild profligacy of its summers . There&#39;s an excellent bookshop there , which deserves quiet exploration without sandalled crowds pushing through . It&#39;s called The Provincetown Bookshop and is a worthy stopping place or even a goal of a winter visit. There used to be a restaurant in Wellfleet which also was worth a journey of many miles to get to . What heaven when we came in there one blustery day and found that the restaurant opened into a considerable secondhand bookshop, including some volumes from the libraries of such distinguished litterateurs as Edmund Wilson and others , presumably put on sale after their deaths or removals. Well , the books were sold off and replaced with garish tourist stuff. Then there&#39;s the famous-the justly famous-Landfall Restaurant at Woods Hole, where you get the boat for Nantucket or Martha&#39;s Vineyard. The Vineyard now holds a special festive winter week in the Christmas season , usually in mid-December. This island, like her remoter sister Nantucket, seems to step gently backward into a plainer and more thoughtful time when the temperature falls, and wintry gusts chase each other across the icefringed harbors . On th1e way back west there are a gaggle of greatt waterfront restaurants in New SEPA HISTORY , WINTER 1987-88