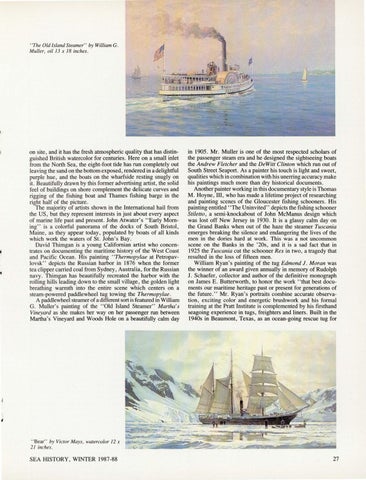 on site, and it has the fresh atmospheric quality that has distinguished British watercolor for centuries. Here on a small inlet from the North Sea, the eight-foot tide has run completely out leaving the sand on the bottom exposed, rendered in a delightful purple hue, and the boats on the wharlside resting snugly on it. Beautifully drawn by this former advertising artist, the solid feel of buildings on shore complement the delicate curves and rigging of the fishing boat and Thames fishing barge in the right half of the picture. The majority of artists shown in the International hail from the US , but they represent interests in just about every aspect of marine life past and present. John Atwater&#39;s &quot;Early Morning&quot; is a colorful panorama of the docks of South Bristol , Maine , as they appear today , populated by boats of all kinds which work the waters of St. John &#39; s Bay. David Thimgan is a young Californian artist who concentrates on documenting the maritime history of the West Coast and Pacific Ocean. His painting &quot;Thermopylae at PetropavIovsk&quot; depicts the Russian harbor in 1876 when the former tea clipper carried coal from Sydney, Australia, for the Russian navy . Thimgan has beautifully recreated the. harbor with the rolling hills leading down to the small village , the golden light breathing warmth into the entire scene which centers on a steam-powered paddlewheel tug towing the Thermopylae. A paddlewheel steamer of a ilifferent sort is featured in William G. Muller&#39;s painting of the &quot; Old Island Steamer&quot; Martha&#39;s Vineyard as she makes her way on her passenger run between Martha&#39;s Vineyard and Woods Hole on a beautifully calm day

in 1905. Mr. Muller is one of the most respected scholars of the passenger steam era and he designed the sightseeing boats the Andrew Fletcher and the DeWitt Clinton which run out of South Street Seaport. As a painter his touch is light and sweet, qualities which in combination with his unerring accuracy make his paintings much more than dry historical documents . Another painter working in this documentary style is Thomas M. Hoyne, III, who has made a lifetime project of researching and painting scenes of the Gloucester fishing schooners. His painting entitled &quot; The Uninvited&quot; depicts the fishing schooner Stiletto , a semi-knockabout of John McManus design which was lost off New Jersey in 1930. It is a glassy calm day on the Grand Banks when out of the haze the steamer Tuscania emerges breaking the silence and endangering the lives of the men in the dories hard at work . This was a not uncommon scene on the Banks in the &#39;20s , and it is a sad fact that in 1925 the Tuscania cut the schooner Rex in two , a tragedy that resulted in the loss of fifteen men . William Ryan&#39;s painting of the tug Edmond J . Moran was the winner of an award given annually in memory of Rudolph J. Schaefer, collector and author of the definitive monograph on James E. Butterworth, to honor the work &#39;&#39; that best documents our maritime heritage past or present for generations of the future.&quot; Mr. Ryan&#39;s portraits combine accurate observation , exciting color and energetic brushwork and his formal training at the Pratt Institute is complemented by his firsthand seagoing experience in tugs , freighters and liners. Built in the 1940s in Beaumont, Texas, as an ocean-going rescue tug for