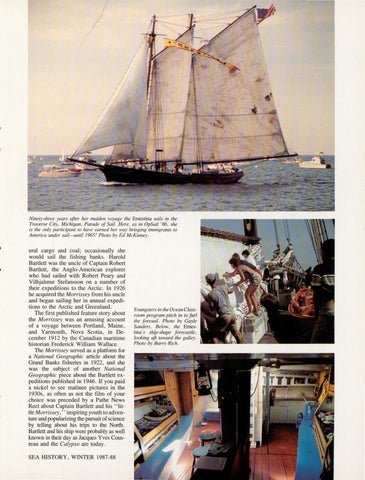 Ninety-three years after her maiden voyage the Ernestina sails in the Traverse City, Michigan, Parade of Sail. Here, as in OpSail &#39;86, she is the only participant to have earned her way bringing immigrants to America under sail-until 1965! Photo by Ed McKinney.

era] cargo and coal; occasionally she would sail the fishing banks. Harold Bartlett was the uncle of Captain Robert Bartlett, the Anglo-American explorer who had sailed with Robert Peary and Vilhjalmur Stefansson on a number of their expeditions to the Arctic. In 1926 he acquired the Morrissey from his uncle and began sailing her in annual expeditions to the Arctic and Greenland. The first published feature story about the Morrissey was an amusing account of a voyage between Portland, Maine, and Yarmouth, Nova Scotia, in December 1912 by the Canadian maritime historian Frederick William Wallace. The Morrissey served as a platform for a National Geographic article about the Grand Banks fisheries in 1922, and she was the subject of another National Geographic piece about the Bartlett expeditions published in 1946. If you paid a nickel to see matinee pictures in the 1930s, as often as not the film of your choice was preceded by a Pathe News Reel about Captain Bartlett and his &quot;little Morrissey,&#39;&#39; inspiring youth to adventure and popularizing the pursuit of science by telling about his trips to the North. Bartlett and his ship were probably as well known in their day as Jacques Yves Cousteau and the Calypso are today. SEA HISTORY, WINTER 1987-88

Youngsters in the Ocean Classroom program pitch in to furl the foresail. Photo by Gayle Sanders. Below, the Ernestina&#39; s ship-shape forecastle, looking aft toward the galley. Photo by Barry Rich.